For the past four years, since returning from Peace Corps service in Armenia, Jennifer and Jeremy Haile called a 416-square-foot Georgetown studio home 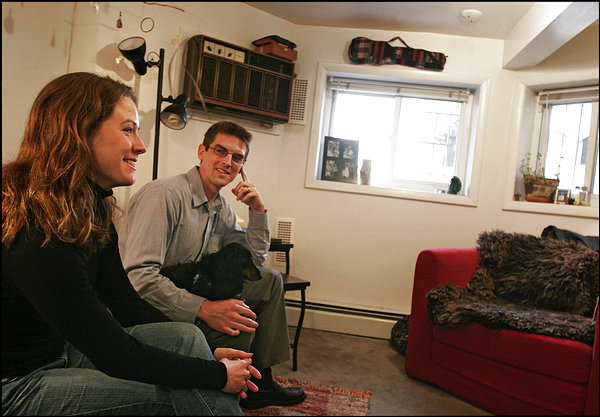 The Hailes are no strangers to domestic deprivation. As Peace Corps volunteers, they lived in what they refer to as a "Soviet-style" apartment in Armenia, where it was so cold that any water left in the bathtub would freeze over. "To go into the kitchen, you had to dress like you were going outside," Jennifer says. For two years they slept in a twin bed, with only a small kerosene heater -- and each other -- to warm them. "Now, when we go to a hotel and there's a king-size bed, we sleep together at the very edge of it," she says. "We don't really know how to sleep apart."

For the past four years, since returning from Peace Corps service in Armenia, Jennifer and Jeremy Haile called a 416-square-foot Georgetown studio home

Caption: Brad and Cynthia Koons, with dog Barney, live together in a basement apartment of less than 400 square feet near Dupont Circle. Photo Credit: By Lucian Perkins -- The Washington Post Photo

On Tuesday, couples everywhere will sip champagne, nibble chocolates, exchange gifts and presumably find plenty of other ways to celebrate the splendors of human intimacy.

But for couples who share tiny spaces, every moment presents an opportunity to snuggle up with the one you love. When you live in an apartment the size of a dorm room, everything -- making dinner, doing dishes, folding laundry, paying bills -- takes on a certain intimacy, whether you want it to or not.

The "tour" of Jennifer and Jeremy Haile's apartment lasts only as long as it takes a visitor to glance from left to right about 45 degrees. For the past four years, since returning from a Peace Corps stint overseas, the couple has called a 416-square-foot Georgetown studio home.

Their bed -- which is also one of their two couches -- is a futon, hard up against the front door. Books, papers, vitamins and foodstuffs share shelf space in one corner. The computer doubles as an entertainment center; they watch DVDs on it and store all of their music on its hard drive. Their refrigerator and stove look like full-size versions that have been shrunk to about 65 percent by some sort of kitchen-appliance copying machine.

During exams, he says, "I was pulling close to 20-hour days. But Jen has the patience of Job. She would use headphones [to watch TV or listen to music]; she prepared all of my meals, and I'd go in my little corner and study. And somehow it worked."

The Hailes are no strangers to domestic deprivation. As Peace Corps volunteers, they lived in what they refer to as a "Soviet-style" apartment in Armenia, where it was so cold that any water left in the bathtub would freeze over. "To go into the kitchen, you had to dress like you were going outside," Jennifer says.

For two years they slept in a twin bed, with only a small kerosene heater -- and each other -- to warm them. "Now, when we go to a hotel and there's a king-size bed, we sleep together at the very edge of it," she says. "We don't really know how to sleep apart."

Living in comically cramped quarters may be easier when you're madly in love with your roommate, the Hailes say, but that doesn't necessarily make it easy . Every move they make reflects a negotiation of sorts.

"Jeremy was losing his eyesight during his first semester," says Jennifer, an events coordinator for National Public Radio. "He thought he was going to have to get glasses. The doctor told him: 'You have to stop reading in such small amounts of light.' What was happening was that I would go to bed at 10:30 or so, and he would turn on this tiny little lamp" to stay up reading until 1:00 a.m. or later. "So now I have to go to bed with the lights on, which is unfortunate." Her husband recently bought her a sleeping mask. (It helps.)

"The three Cs -- communication, commitment and compromise -- will get you through almost any sort of conflict," says Regina Leeds, a Los Angeles-based professional organizer and author of the 2003 book "Sharing a Place Without Losing Your Space: A Couple's Guide to Blending Homes, Lives, and Clutter" (Alpha Books). In her work with cohabiting couples, she has learned that one of the most frequent sources of disagreement is over where to put, and indeed whether to keep, the innumerable things that accrue over the course of their lives.

"People usually bring too much stuff with them," says Leeds. "And then they make assumptions about that stuff. I'll presume that you're going to love my mother's pink china -- and that this is what we will be using on the holidays. And I don't talk to you about it, because, well, surely, if you love me, you can see how beautiful this is. You, on the other hand, are presuming that I see how beautiful your mother's beige china is."

Both presumptions are wrong, she suggests. "Especially in a small space, you need to divest yourself of everything that is not critical. That can mean tossing things. But it can also mean getting a storage space, or better yet, asking Mom and Dad if you can store things in their garage, or in your old room."

That idea worked for Brad Koons. When his parents moved from Arizona to a nearby suburb in Maryland, he persuaded them to let him keep his car and his copious outdoor gear at their house, rather than at the minuscule English basement he and his wife, Cynthia, share near Dupont Circle. Though it's a one-bedroom, their apartment appears to be smaller than the Hailes' studio. (They don't know how many square feet it is, and have never asked. The figure wasn't disclosed in the original "for lease" listing. Imagine that.)

But the Koonses -- he's a lawyer, she just received her graduate degree -- aren't complaining. "We think of the size of the apartment as the price of getting to have a completely walkable lifestyle," Cynthia says. "We really appreciate that we can walk to anything we need in the neighborhood. Brad can walk to work, and I can walk to school."

The Koonses eat on their futon, use their miniature dishwasher as a cabinet and keep pots and pans "under the sink, where normal people keep their cleansers," she says. Their bedroom can barely contain their full-size bed, much less the open shelving where they store clothes, books and CDs. As a quirky symbol of the couple's commitment to streamlining their lives, a unicycle leans against a wall in the vestibule; a bicycle wouldn't fit.

But their lifestyle may actually be good for their marriage. Cynthia says that living in a shoebox "encourages more communication. You're both sitting right there. There's no escape. If you have an argument, you're just going to have to talk through it and get over it. Every once in a while, one of us will go into the bedroom and shut the door, if we feel like we need some time alone. But for the most part, it forces us to battle it out until there's peace."

So far, they've managed to avoid the deadly third rail of living together in a tiny space: passive-aggressive "housecleaning" that results in the unauthorized removal of another's stuff.

The Hailes, alas, were not so lucky.

"My mom sent me a box with about $125 worth of cosmetics and vitamins in it," Jennifer says. "I was waiting to start my new beauty regimen until I finished my old supply. Well, because I hadn't opened the clearly marked box in four months, Jeremy decided that I must not want it badly. He trashed it and didn't tell me."

That, as it turns out, was the wrong thing to do.

"It was one of the rare moments of shouting at our place," she says. "I took the opportunity to remind him of everything he's thrown away without my permission. I insisted that he hand-deliver my mom a check, and admit -- and apologize for -- his disregard for property. But finally I caved, and have been forced to lie to my mom for months about the wonders of Susan Lucci's skin-care therapy."

This story has been posted in the following forums: : Headlines; COS - Armenia; Marriage; Humor; Housing