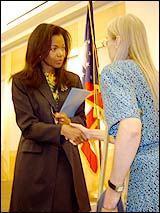 With no end in sight to the war in Iraq, Abercrombie-Winstanley, who serves as the U.S. consul general in Jeddah, knows this will be a long, challenging year. Her mandate, to promote the U.S. government's diplomatic interests within the region, will be made even more difficult by the absence of her family. As an African-American woman in a country where there are few women in the workplace, not to mention in such an influential position as hers, she must not only be a voice for U.S. foreign policy, but for the kingdom's downtrodden female population as well.

During the past year, Saudi Arabia has witnessed suicide bombings, gun battles and kidnappings targeting foreign workers. The attacks have been blamed on al Qaeda and sympathizers of the anti-Western terror network.

Cleveland Heights native Gina Abercrombie-Winstanley and her family live in an apartment complex with other Westerners. It is similar to the one bombed in May 2003 in Riyadh, resulting in the deaths of 23 people, including nine Americans. This April, Abercrombie-Winstanley's husband and their two children were advised to evacuate their apartment due to the increased violence.

With no end in sight to the war in Iraq, Abercrombie-Winstanley, who serves as the U.S. consul general in Jeddah, knows this will be a long, challenging year. Her mandate, to promote the U.S. government's diplomatic interests within the region, will be made even more difficult by the absence of her family.

As an African-American woman in a country where there are few women in the workplace, not to mention in such an influential position as hers, she must not only be a voice for U.S. foreign policy, but for the kingdom's downtrodden female population as well.

Her placement as consul general, the first for a woman in Saudi Arabia, "was a shock for me and the Saudis," she admits.

It's the love for her job, and her lifelong love for this beautiful but troubled region, that keeps her going, she says. Abercrombie-Winstanley's journey from Cleveland Heights to Jeddah has been a long one, with stops in Tel Aviv, Baghdad, Washington D.C., Jakarta and Cairo along the way. She shared her story with the City Club on Aug. 20.

Being a woman has been an asset in a country where females represent only 6% of the country's workforce despite constituting the majority of college-educated Saudis. Men are often prohibited from entering women-only facilities, so Abercrombie-Winstanley has access to an oft-ignored portion of the population.

The consul has also been an advocate for women, setting up internship programs and working with female colleges to discuss women's issues. Her Saudi friends call this a "meager" step toward any modicum of equality, but, she says, at least it's a step in the right direction.

Abercrombie-Winstanley's first step towards her current position began about three decades ago: Growing up in Cleveland Heights, the slim, attractive diplomat spent much of her time on Coventry Road, frequenting shops such as Passport to Peru that introduced her to other cultures. She learned as much as she could about the unfamiliar, even taking Hebrew while a student at Cleveland Heights High School.

Her ties to Cleveland, and particularly to Cleveland Heights, "are still very strong," she says. She carries an Ohio driver's license as a reminder of her hometown.

After attending George Washington University, Abercrombie-Winstanley studied for a year at Tel Aviv University and spent another year working in the Persian Gulf for the Peace Corps. She joined the Foreign Service in 1985 and served as consul in Baghdad before being making stops in Cairo and Jakarta, Indonesia. She also spent some time in Washington, D.C., as assistant to Secretary of State Lawrence Eagleburger.

Abercrombie-Winstanley returned to Tel Aviv after taking a year of advanced Arabic in Tunisia. For three years in the mid-90s, she worked at the embassy there with responsibility for the Gaza Strip.

The dry heat and ancient cultures of the Middle East have always been an attraction for her, although the time she spent there has not been without its scary moments. She was in Baghdad, for example, when Iranian SCUD missiles rained down not far from her position.

While Jeddah has yet to be touched by violence, this is not an easy time to be an American in Saudi Arabia, she admits. In June, American engineer Paul Johnson was kidnapped and decapitated by his captors after the U.S. government rejected a demand to release all detained militants. Further tension has arisen from the continuing war in Iraq and the Abu Ghraib prison abuse scandal.

The oil-rich kingdom has also been heavily scrutinized for being the home country to most of the 9/11 hijackers. More recently, Michael Moore skewered the Bush family for its supposed ties to Saudi Arabia in his film, "Fahrenheit 9/11."

The turmoil has led to a growing "culture of intolerance" that threatens America's relationship with Saudi Arabia and the Arab world as a whole, says Abercrombie-Winstanley. For many Americans, she adds, 9/11 was their first introduction to Islam, a peaceful religion dominated on cable news by a few fanatics who kill in the name of their faith.

The country's leadership condemns such killings as un-Islamic, says the consul. Saudi crown prince Abdullah said in June that terrorists within the country would face "forceful consequences" if they didn't surrender immediately.

The former Clevelander (who is not Jewish) has been approached by Saudi strangers who read her portions of the Koran, which tell how the Prophet Mohammed reached out to others, especially Jews.

However, there is a general level of distrust toward America from the Arab world, Abercrombie-Winstanley admits. She has gleaned feelings of ill will from all levels of Saudi society-from the country's educated cadre to its non-English speaking citizens.

"They think America does not care about the Arab world," she remarks. As uneducated Americans view the Arab world, through the actions of terrorists, some Arabs paint the same broad brush over America for the Abu Ghraib atrocities.

The war in Iraq has also bred distrust among the college students, businessmen, and others, says the consul. The Fox cable news channel is widely watched among Saudis who are angered by its largely pro-war stance.

Abercrombie-Winstanley has a way to counter those feelings: "I ask them if they watched Al Jezeera tonight," she quips, referring to the Arab-run, anti-war cable station.

Saudi anger, the consul adds, might also stem from the country's economic problems, combined with its booming population. Two-thirds of its citizens are under the age of 25; the nation's per capita income is below $7,000 per year.

Violence and skyrocketing oil prices could drive away more investors, leading to a further drop in job creation and economic development. A lack of economic and social mobility among Saudi youth makes them ripe for the picking by extremist groups, notes Abercrombie-Winstanley.

She tells her Saudi audiences to read American papers and believes Americans should educate themselves about Islam, the fastest growing religion in the world.

The consul returns to Jeddah in September. She plans to run workshops about the upcoming American presidential elections, a topic of endless fascination for a people unable to criticize their leadership openly.

"Our countries can help each other," remarks Abercrombie-Winstanley. Not only through opportunities for Saudis and others across the Arab world, but "with a vow to defeat the terrorist groups that want to divide our two peoples."