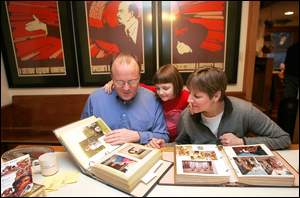 Chandler, an Essex Fells native, completed her Peace Corps work in 1987. After three years, America held some surprises of its own. "I couldn't turn on the TV at home. There were so many wires and boxes," Chandler said. "I looked around and saw all the groceries, all this stuff in cabinets and it just kind of took me aback. You have to understand that in Costa Rica I would walk into this little pulperia for food and be lucky to see one carton of milk."

Lessons last for a lifetime

Kerry Chandler can't believe it has been more than 20 years since she served in Costa Rica as a member of the Peace Corps.

"I get all choked up when I think about it, and start to tear," said Chandler, of Rumson. "It was a much better experience than I thought it would be. I got so much out of it. When I returned to the States, I was more open-minded, more tolerant of people."

Two Peace Corps volunteers from the Shore reflected on their experiences abroad and shared their stories leading up to the organization's 45th anniversary today.

Though it was founded in 1961, the Peace Corps actually traces its roots to a year earlier. In 1960, then-Sen. John F. Kennedy challenged students at the University of Michigan to serve their nation by volunteering to work in developing countries.

Since then, more than 182,000 Peace Corps vol-unteers have gone to 138 countries to help deal with issues ranging from AIDS education to information technology to environmental preservation.

Lynn Ross went to Sri Lanka in 1984, having been inspired by the artwork of her father, Tom Ross.

"When I was 7 years old, he illustrated a book on Greek culture and I remember it showed two men walking arm in arm," said Ross of Red Bank. "That was common in the Greek culture and it struck me as very interesting. My dad had a saying — learn another language, see another world — and that was my first inkling of wanting to serve."

After graduating from Millersville University in 1982, Ross signed up for the Peace Corps. Two years later, she arrived in Sri Lanka and was shocked at the culture — so different from her days growing up in New Cumberland, Pa.

"The people were mostly Buddhist, Hindu and some Muslim, and they arranged marriages," said Ross, 45. "As a single woman, it was difficult socially, culturally. I had to adjust my behavior to fit in so I didn't attract unwanted attention."

Ross spent her days teaching English to adults. At the end of the year, the adults took a test to see if they were qualified to become teachers. "If they failed, it was back to the rice field," Ross said.

As her three-year stay was drawing to a close, Ross attended a conference in Colombo, the capital, and heard the children singing the lyrics to a song she had recorded.

"It was just such a wonderful feeling, so heartwarming," Ross said. "It made me feel that I had had a significant impact on them."

Chandler was an idealistic 22-year-old when she joined the Peace Corps in 1984. She yearned to teach abroad and was delighted to learn she would go to a central valley in Costa Rica to instruct children.

Chandler stayed with a family that had four small girls, and coached a boys soccer team. She used games and physical activities to interest the children in math and social studies.

Often, she would find herself having to walk long distances to school.

"I was a single female walking on dirt roads through coffee fields, and I always knew someone was watching me, taking care of me," Chandler said. "It was a strange feeling, knowing no one was going to hurt me. It's something I will always remember."

At night, Chandler could sometimes feel a cockroach creeping over her face. Or she'd notice a snake moving slowly into the hut.

"Those are things that you just learn to live with over there," Chandler said. "After a while, I became much more understanding of things, much more tolerant. Now, nothing gets to me."

Chandler, an Essex Fells native, completed her Peace Corps work in 1987. After three years, America held some surprises of its own.

"I couldn't turn on the TV at home. There were so many wires and boxes," Chandler said. "I looked around and saw all the groceries, all this stuff in cabinets and it just kind of took me aback. You have to understand that in Costa Rica I would walk into this little pulperia for food and be lucky to see one carton of milk."

Like Chandler, Ross suffered through "reverse culture shock" when she returned home.

Day after day, she would sit around and watch television for long stretches, growing agitated at the avalanche of ads and relentless references to consumerism.

"The waste and the consumption in America is just so repulsive," Ross said. "One product is not enough. You must have five different brands. To this day, that stuff still bothers me."

Also troubling was the often-frantic pace of American life. She had learned to take her time in Sri Lanka, teaching patiently, methodically.

"Our culture is in such a hurry to get work done," Ross said. "It is such a shame. We don't take any time to enjoy the social aspect of our work."

Riordan said one of the reasons the couple settled in Red Bank was the multicultural aspect of its school system.

"Our kids saw how much we value other cultures, which is a direct result of our Peace Corps experience," said Riordan, 44. "We teach them to be accepting of other cultures, to be broad-minded. When they bring something home from school that has to do with another culture, they know we are interested and it rubs off on them."

Ross said she wants her children to think of people from other cultures as having feelings, too.

"They are not just objects, pictures from a National Geographic magazine," Ross said. "They are human beings, like us."

Chandler has tried the same approach with her 8-year-old twins, Sam and Tess. She arranged a family trip to the central valley of Costa Rica last summer so her children and husband, Jeff, could experience what it was like for her in the Peace Corps.

"The community was just so loving when we returned," Chandler said. "By the end of the day, 30 friends had gathered at the tiny house where I lived. My family met my old family and we went to see the soccer field where I coached. My daughter just loved the experience. She said, "Mom, can we go back again and live there for a couple of days to see what it is like?' "

When Ross heard a tsunami had caused mass destruction and deaths in Sri Lanka in December 2004, it triggered a flood of Peace Corps memories.

"I lived with a family there and when I saw the news I was just devastated," Ross said. "I desperately wanted to find out if everyone was OK."

After months of uncertainty, Ross learned that one of her friends was going to visit Sri Lanka in the summer as a member of the Crisis Corps Volunteers, a branch of the Peace Corps. The school where Ross had worked was destroyed, but most of its students survived the tsunami, news reports showed.

As the Crisis Corps representative was about to embark on her journey, Ross slipped an envelope filled with money into her pocket.

"Give it to my family over there," Ross said.

Twenty years later, she was still helping, still reaching out to aid the people of Sri Lanka.

This story has been posted in the following forums: : Headlines; COS - Costa Rica; COS - Sri Lanka; Married Couples