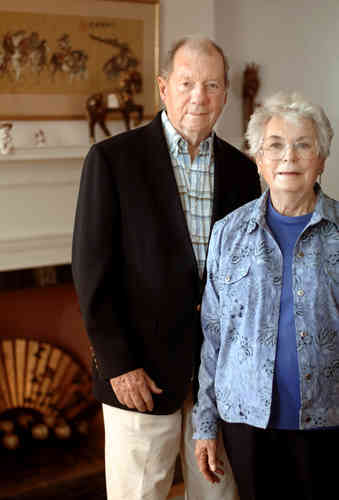 From 1967 to 1986, Dyal left his mark on several worldwide relief agencies. He directed all the Peace Corps volunteers in Colombia, then in all of North Africa, the Near East and South Asia. He directed Panama volunteers from 1995 to 1997. "He's literally traveled, I think, every inch of the world, and everywhere he went, he was like a pied piper," said Steve Vetter, who met Dyal almost 40 years ago in South America. "People just loved him."

Fredericksburg resident Bill Dyal has traveled the world through his work with relief agencies.

Caption: Edie Dyal has followed her husband, Bill, around the world. They live now in Fredericksburg.

He traveled by plane and train, boat and barge, Jeep and foot, over the mountains of Nepal, the deserts of North Africa and the jungles of Central America.

On a typical day, he might have hobnobbed with ambassadors one minute, then hopped on a donkey to go see peasant farmers the next.

"He's literally traveled, I think, every inch of the world, and everywhere he went, he was like a pied piper," said Vetter, who lives in Annapolis, Md. "People just loved him."

Vetter still keeps in touch with other Peace Corps volunteers who also consider Dyal their mentor. They remember the way Dyal stressed that their role was to help others find a way to help themselves. He also emphasized that the best leaders get behind people, not in front of them, Vetter said.

These days, the 77-year-old Dyal spends more time at his home in the city than in other time zones.

He still works as a consultant for charitable groups around the world and regularly drives to Washington for meetings.

And he occasionally hops on a plane and travels to the other side of the world, as he did in November. He flew to Argentina to make a speech, and the trip brought back memories of other visits to foreign lands.

"There was always a crowd to greet you," he said, smiling. "I felt like a rock star."

Not bad for a poor boy from Texas.
Charting his travels

Bill Dyal--he says everyone calls him Bill--was the oldest of three boys. His father worked for the railroad, and neither of his parents was able to go to high school.

They insisted that their sons get a good education, he said.

Dyal was the first on both sides of his family to earn a college degree.

On registration day, when he signed up for classes at Baylor University in Waco, Dyal met a fellow 17-year-old named Edie.

The boy from Texas and the girl from Arkansas hit it off and later married.

She must like him as well. She's followed him across continents.

The Dyals' home in Fredericksburg is the 34th place they've lived.

As often as Edie Dyal moved, she didn't travel as much as her husband. She stayed with the children in New York when Dyal was president of AFS International and visited 73 of 75 countries served by the program.

(AFS began under the name of American Field Service and is one of the world's largest student-exchange programs.)

At one time, the Dyal daughters kept a map in the breakfast nook so they could chart their father's paths. One night, when Dyal was home, his oldest child, Kathy, said a grateful prayer.

"Thanks for letting Daddy come over," she said.

Dyal loved the destinations--and the people he met--but the traveling was exhausting at times. Once, he was picked up at the airport in Melbourne, Australia, and assumed he'd be able to rest before doing any official duties.

A crowd was waiting for him.

That started a little joke about Dyal that followed him through most of his career.

Dyal laughed often and easily during a recent interview. He's clearly been through the process many times, and he guides the interviewer through the early days of his life and along some of the highlights of his career.

He also hands out a resume because he knows no one could possibly keep up with all the things he's done.

A few years ago, he was speaking in Oregon, and the person who introduced him mentioned every position he'd ever held.

When Dyal took the podium, someone in the audience stood up and asked, "What's the matter, Mr. Dyal? Can't you keep a job?"

Dyal started as a Southern Baptist missionary, working in Central and South American countries. He and his wife learned fluent Spanish in Costa Rica, and he'll always remember the people for their kindness.

The Dyals made lots of friends and still get letters from families there, more than 50 years later.

"That's one of the nice things about living in so many places," he said. "We have friends all over the world."

The Dyals came stateside to work on civil-rights issues in the mid-1960s. Dyal got more disenchanted with what he calls the "narrowing views" of the church and mentioned this to Bill Moyers, an old friend from Texas.

One conversation between two friends from Texas started Dyal on another career path.

From 1967 to 1986, Dyal left his mark on several worldwide relief agencies. He directed all the Peace Corps volunteers in Colombia, then in all of North Africa, the Near East and South Asia.

He humbly mentions that the board from Inter-American Foundation called him about being the new group's founding president in 1971. Congress wanted a new agency to work people-to-people, instead of government-to-government, and Dyal was the man picked to lead it.

Employees in practically every other relief agency in Washington "resented the hell out of Bill," Vetter said, because Congress took money from their programs to fund his.

But he made the new agency, with a new mission, work.

"To make a long story short, Bill Dyal had the vision, the creativity and the diplomatic skills to use that money to produce incredible results," Vetter said.

Dyal built the new agency from the ground up, according to an article in Grassroots Development, the journal of the Inter-American Foundation.

Its January 2005 journal celebrated the 35th anniversary of the program. More than one-third of the pages in the journal were earmarked "The Dyal Years" and praised the programs he created, many of which are still going strong decades later.

"Most of the major foundations talk the talk of supporting grass-roots and community development, but few come close to working the way Bill envisioned the IAF," stated one article, titled "Bill Dyal's Long Shadow."
'He has this wonderful way'

Other agencies asked Dyal to be their president, too.

"I never had to look for a job," he said. "One thing always flowed into another."

Dyal didn't know anything about the academic world and made that clear to board members from St. John's, a liberal arts college. One member told him the school had plenty of scholars; it needed a leader.

The previous administration had created some "disharmony" among the staff and community, said Jeff Bishop, vice president at St. John's.

"Bill really put that at ease and made everybody feel good about being at the college again," he said. "But I think that's Bill in a nutshell. He has this wonderful way of looking you in the eyes and smiling and befriending you immediately."

Dyal's tenure at the college was cut short when he developed a brain tumor in 1988. He suffers from some residual damage--dry eye and a deaf ear--"but I'm alive," he said, smiling.

After his recovery, he had one last hurrah with the Peace Corps. He directed Panama volunteers from 1995 to 1997. Then, he and Edie settled in Fredericksburg, near Kenmore Plantation and Gardens.

They both like living in the city and being close to their families. Edie Dyal keeps busy as a concert pianist--and giving lessons to the grandchildren--and both attend Fredericksburg Baptist Church.

"I'm happy in a church for the first time in a long time," he said.

"It's a place where you can go and feel truly loved," she said. "That's helped us feel at home, after living in so many different places."