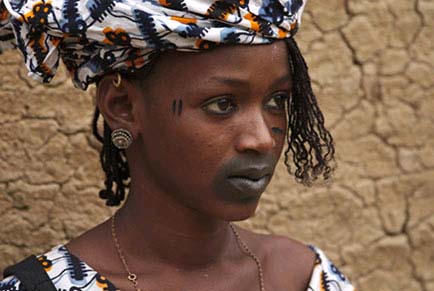 "The girl stopped in her tracks, surprised to see me. I had never before been alone in the village in this way: in the daytime, the time when the village belonged to women. She was tall and slender, old colonial coins hammered into a necklace that hung over her collarbones, strings of amber beads hanging from her long earlobes. Her lips were tattooed around with black ink, and her hair was woven into tight plaits, coins arranged again in them. Of course I knew who she was: Djamilla, the Peul patriarch’s unmarried daughter. She would have been considered beautiful anywhere."

Shortly after Khadija’s death, Mamadou brought me a sack of mandarins from his father’s orchard. I wasn’t much in a mood to be with the Worodougou after what had happened, and each morning when the families would set out for their fields, a wife or husband would salute me as I sat on my stool. “Not going to the fields with us today, Adama?” they’d ask. I’d wave them off with my hand, hold my side and say, “Djekwadjo.” ‘Malaria’.

I was often down with malaria, everyone in the village was now and again, but this time it was something more serious, a sickness of the heart. In my early months there, I had romanticized the Worodougou, made them out to myself to be better than they were. But I now understood that they were as flawed as anyone.

It was nice to be alone in the village those days, everyone gone to the fields but a few scattered old women tending to their families’ hearths. I ate mandarins and watched the clouds scud across the sky.

One morning, the village empty and quiet, a Peul girl came in her fancy wraps and silver anklets, a wide calabash of milk on her head, trading ladles of it for yams from hut to hut. The Peul were nomadic cattle herders from Mali, and a family of them lived on the village’s far western edge, near where they corralled their herd at night. Aside from trading milk, they did not bother with the Worodougou, nor the Worodougou with them. The Peul considered themselves a superior race because they did not work the soil, and the Worodougou thought them contemptible for the same reason. Despite this, Peul girls had the reputation of being the most desirable in the region. Perhaps it had to do with their mystical desert roots, the pride of their tall carriage, their shyness, their exotic language and culture. But perhaps, too, it was because of their beauty.

The girl stopped in her tracks, surprised to see me. I had never before been alone in the village in this way: in the daytime, the time when the village belonged to women. She was tall and slender, old colonial coins hammered into a necklace that hung over her collarbones, strings of amber beads hanging from her long earlobes. Her lips were tattooed around with black ink, and her hair was woven into tight plaits, coins arranged again in them. Of course I knew who she was: Djamilla, the Peul patriarch’s unmarried daughter. She would have been considered beautiful anywhere.

Djamilla looked at me in a defiant way, set her hands on her hips. Maybe she didn’t like being surprised; maybe again it was because she was used to the village men calling lewd slogans at her for everyone to hear. She was far enough away, that if I wanted to say something, I’d have had to shout. Instead, as though propelled by a force other than myself, I rolled a mandarin to her. It crawled over the dust as though time itself had slowed, came to rest between her bare feet. Her eyes lined with kohl made her seem dangerous. The heavy calabash on her head made her seem taller than she was. I wondered what she would do, why I had rolled the fruit to her in the first place, why I cared. Then, like a wading bird, she ducked and picked the mandarin up.

“I don’t speak Worodougou, whiteman,” she said back at me fluently in that language.

“Dja-mil-la,” I called, the syllables rolling off my tongue like a song.

“Who are you to say my name, you dirty Worodougou farmer. Aren’t your fingernails covered in soil and filth? Don’t you know I’m a Peul?”

“I’m not a Worodougou,” I told her and grinned, “and your name is in the village for all to know, as pretty as the moon and stars.”

“I’ll plug my ears with cotton.”

“You’ll know in your heart that I’ve come.”

“Then I’ll pet those dogs, because they’ve eaten your heart.”

“Then those dogs will bite you, because they have my heart inside of them.”

“You have pictures to show to me? Show them to my father. You will see what he says. Then you won’t roll mandarins at me like a Worodougou monkey.”

“And then you won’t pick them up.”

Djamilla looked at the fruit in her hand like understanding what it meant. For an instant, I thought she would throw it at me, but instead she folded it into her wrap. She said as she turned and left, “My father likes to eat them, so what?”

The funk I had been feeling dissipated into the air. I stood in my morning wrap as she receded, my chest bare, struck a pose as vivid as I suddenly felt. Then a stooped old woman came by—the witchdoctor’s mother—chasing a duck away from her compound with scrap of blue cloth tied to a stick—which is what old women used to chase away ducks—and she saw me, the parting Djamilla, understood something, and straightened. “Adama! Get in your hut,” she said and poked me in the ribs with the stick. “That you are white is bad enough. But you are also hairy! Cover up! If you let Djamilla see how ugly you are, then she may not marry you.”


"Whiteman" by Tony D'Souza will be published in April 2006 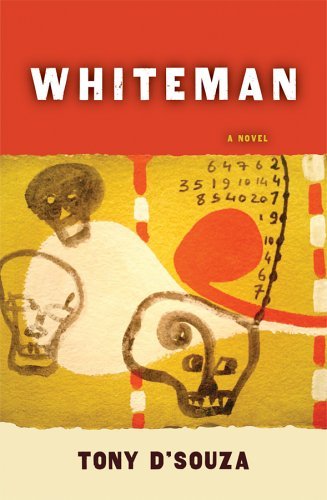 This has been an excerpt from "Whiteman" by Tony D'Souza. "Whiteman" will be published in April 2006. You can pre-order the book at Amazon.

When this story was prepared in December 2005, this was on the front page of PCOL: