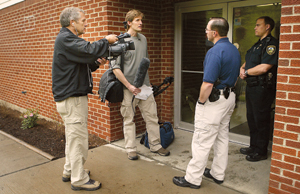 Wilson saw the small town where he grew up, a town that he still holds close to his heart, latch on to the topic of a same-sex union and exchange ideas about it, he said. "I thought it was really cool the community could engage in that kind of dialogue," he said. Wilson decided to turn the experience into a documentary.

Caption: Joseph Wilson (second from left) talks with Oil City Police Chief Robert Wenner (second from right) while Dean Hamer films the conversation outside the Northwest Pennsylvania Regional Planning and Development Commission office on Seneca Street. At the far right is Lt. Mike Canaan. Wilson said he wanted to attend an event at the commission office where U.S. Sen. Rick Santorum (R-Pa.) was visiting, but was not permitted.

Two years ago a former Oil City resident announced to the local community that he had found someone with whom he wanted to spend the rest of his life.

He was happy, his partner was happy, and they wanted to share their happiness. So they paid for a wedding announcement in the pages of this newspaper.

Little did they know the picture and a few paragraphs would cause such a stir.

The public response to the announcement - that 1982 Venango Christian High School graduate Joseph Wilson and his partner, Dean Hamer, had married on an April day in Canada - is the catalyst for a documentary the two are making about love, hate and understanding in a small town.

Wilson grew up in Oil City, attended St. Stephen School and Venango Christian and later graduated from the University of Pittsburgh with a bachelor's degree in urban studies and economics.

He became a Peace Corps volunteer, working on wells and irrigation and health and nutrition issues in the West African nation of Mali. When he returned to the states two and a half years later, he moved to Washington, D.C., where his first job was with community organizations addressing the needs of lower income inner-city families.

Today, he is employed as a program officer for human rights by the Public Welfare Foundation, an organization that provides financial support to communities in the U.S. and around the world working for economic and social injustice.

Wilson met Hamer in 1996 at an event sponsored by the National Gay and Lesbian Task Force. They started off as friends. Eight years later they were married in Vancouver, British Columbia.

The couple's wedding announcement, tucked between others on an inside page of The Derrick and The News-Herald, became the subject for scores of letters to the editor.

At first, most spoke out against the announcement of two men being wed.

But then Wilson says he began seeing letters defending the union.

"What inspired me was as this played out, people starting speaking out and responding," he said.

Wilson saw the small town where he grew up, a town that he still holds close to his heart, latch on to the topic of a same-sex union and exchange ideas about it, he said.

"I thought it was really cool the community could engage in that kind of dialogue," he said.

Wilson decided to turn the experience into a documentary.

He's been working on it for about a year, traveling to the Oil City area many times to speak with letter writers and others.

"I looked for as many addresses as I could find from the letters that were written," he said.

He contacted some of the letter writers explaining the project and asking for their input.

"I wanted to take a deeper look at what was going on here," Wilson said. "It is somewhat representative of small towns across the country."

Of the 12 to 15 people he contacted who had written letters opposing the union, only two responded, he said. One agreed to participate right away. The other took about a year to convince.

Wilson said he wants to find out why some people try to demonize homosexuals.

"The other thing I want to ask is if they ever think of the impact the words they use have on individuals in the community and young people in particular."

It is his hope that the documentary and his work in the area will build bridges between people of differing opinions.

Perhaps that already has begun.

While working on the project, Wilson also said he has developed a growing disappointment for the area's political leadership.

Wilson said he tried several times to contact state Rep. Scott Hutchinson (R-64th) of Oil City to discuss the Pennsylvania Marriage Protection Amendment. The amendment defines marriage as a union between one man and one woman.

He said he also stopped at Hutchinson's office but has been told Hutchinson is not in or that he was there but wouldn't meet with him.

"I think it is very irresponsible not to engage with the public," Wilson said.

Hutchinson said he did speak with Wilson one evening earlier this month at Republican committee headquarters.

"He stopped by with his camera and came in and asked me some questions," Hutchinson said.

The legislator also said Wilson stopped by his office at a later date.

"Yeah, he did, but I figured I answered his questions," Hutchinson said.

"People were coming in and out," he added, noting he had appointments that day and was unable to talk to Wilson.

"I answered the questions he asked me" previously, Hutchinson said.

Wilson said he also tried to get the attention of Hutchinson and U.S. Sen. Rick Santorum (R-Pa.) during a visit the lawmakers made to the Northwest Pennsylvania Regional Planning and Development Commission office in Oil City. Wilson said he wanted to ask Hutchinson and Santorum how marriage amendments would benefit economic growth in the area.

"When I was with Sen. Santorum, as we were walking in there, he was yelling from a distance that question," Hutchinson said.

Hutchinson declined to say much more on the issue. "I feel I answered his questions live. He had the cameras there," he said.

The legislator also quizzed the newspaper, questioning the definition of a documentary film and the pertinence of publicizing such a film.

Wilson said he was issued a press pass to attend an event at the Northwest Pennsylvania Regional Planning and Development Commission on the day Hutchinson and Santorum were there, but the press pass was later revoked. He said he was given a letter by the commission stating that he was no longer able to attend.

The commission said Wilson was not issued a pass to the event.

"No, he did not in fact receive a press pass," said Emily Gill, manager of public relations for the commission.

"The May 15th event was an in-house recognition reception and was by invitation only. Mr. Wilson left a message regarding his request to attend this event on his phone service prior to the reception," the commission stated.

On another topic, Wilson believes the city's idea to transform itself into a community where artists, who practice across a spectrum of mediums, will want to relocate and fill downtown buildings with arts-based shops, studios, performance and living spaces, is a good one. But he has some concerns.

"Artists are generally open-minded and think of inclusion of all people," Wilson said.

"How does a region that is so economically depressed think it will attract people ... by being so closed-minded? ... Isn't it time that we be inclusive of all people?"

Calling for discriminatory measures on one hand and trying to spur economic growth on the other, just doesn't make sense, according to Wilson.

Although he has encountered some negative experiences during filming of the documentary, Wilson's work here has renewed his fondness for the area. He has made new friends and enjoyed the beauty of his hometown.

Wilson hopes to wrap up filming in June or July. The film will then go into postproduction.

When it is finished he would like to screen it locally.

"We hope ultimately the example of what happened in Oil City, Venango County when the moment presents itself, people rise to the occasion and come together to demonstrate what is important to them in their community," Wilson said.

This story has been posted in the following forums: : Headlines; COS - Mali; Gay Issues

Joe, you will always have support from former Ji Bagons. Keep up your good work.