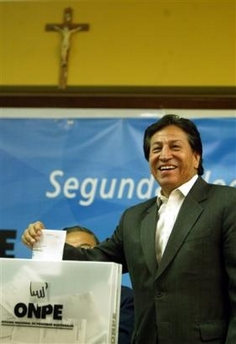 Many Peruvians feel they have not benefited from economic growth that averaged 5.5 percent over the past four years, when the poverty rate dropped just two percentage points to 52 percent. President Alejandro Toledo of Peru was a language instructor for the Peace Corps in the 1960's. In 2002, Toledo invited the Peace Corps to return to Peru after a 27 year absence.

Garcia said voters in Sunday's runoff had sent an overwhelming message to Chavez, the anti-American leader of Venezuela.

Peruvians rejected the "strategy of expansion of a militaristic, retrograde model that he has tried to impose in South America," Garcia said.

Chavez had endorsed Ollanta Humala, a political upstart many Peruvians saw as dangerous to democracy. He extended his regional influence last year with the election of a loyal ally, Evo Morales, as Bolivia's president. Like Morales, Humala had pledged to punish a corrupt political establishment and redistribute wealth to his country's poor Indian and mestizo majority.

Garcia, 57, held an insurmountable lead of 53.5 percent against 46.5 percent for Humala with 91 percent of the vote counted, Peru's national electoral authority said Monday.

The final margin was expected to shrink, however, as Humala's support is strongest in rural areas where vote reporting is slower. Unofficial partial ballot counts by two respected polling companies and a citizen's watchdog group all gave Garcia more than 52 percent of the vote.

Humala, 43, who burst onto the political scene in 2000 while leading a small-scale military rebellion against then-president Alberto Fujimori's foundering corruption-riddled regime, appeared to accept defeat Sunday night. He said his fledging nationalist movement, formed in December, recognized the partial results and "saluted" Garcia and his party.

But his spokeswoman, Cynthia Montes, insisted that he had not acknowledged Garcia's victory. Humala was emphatic Monday morning, telling reporters: "We are waiting for the results. I am going to wait. I feel like the winner. We have won. We have changed the political scenario of the nation."

Humala won a first round of voting on April 9 among 20 candidates. Garcia qualified with a razor-thin victory over the third-place candidate.

Garcia left office in disgrace in 1990 with Peru nearly bankrupt and battered by the devastating Shining Path insurgency. He fled into exile two years later when Fujimori tried to arrest him, returning in 2001 after the Supreme Court ruled that the statute of limitations on corruption charges against him had expired.

Garcia then made a spectacular run for the presidency in Peru's previous election, winning a spot in the runoff and narrowly losing to current President Alejandro Toledo, who is barred legally from seeking a consecutive term.

Seething ethnic and class resentments deeply divide this Andean nation, and Garcia acknowledged that one of his main challenges will be to rid the political class of corruption.

"I want our party this time to demonstrate to the Peruvian people, who have called it to the highest responsibilities, that it will not convert the state into booty," Garcia said, referring to widespread corruption that marked his first term from 1985-90, when tens of thousands of party members landed state jobs.

Garcia won majorities in the capital, Lima, where a third of Peru's 16 million voters live, and along the more developed northern coast.

But he lost badly in almost all of Peru's southern and central highland states and in the country's jungle interior -- populated by poor Quechua-speaking Indians and mixed-race mestizos, long neglected by the nation's political elite.

Many Peruvians feel they have not benefited from economic growth that averaged 5.5 percent over the past four years, when the poverty rate dropped just two percentage points to 52 percent.

"The results highlight that Peru is a remarkably torn country, along social, ethnic and regional lines," said Michael Shifter, an analyst at the Inter-American Dialogue think tank in Washington, D.C. "Garcia's task is formidable. Nearly half the country that voted against him did so with anger, and over half of those who voted for him did so grudgingly."

In Humala's comments Sunday night, he did not sound like a losing candidate. He pledged to continue his push for state control of oil and gas resources, punish a corrupt the political establishment and redistribute wealth to Peru's poor Indian and mestizo majority.

"Tomorrow we begin the great national transformation of Peru, the recuperation of our dignity tied to the rescue of our natural resources to put the economy at the service of the people," Humala told reporters in nationally televised remarks.

Humala's party won the largest voting bloc in Peru's 120-member Congress in April 9 elections. It has 45 seats compared with 36 for Garcia's party.

He has his eye on regional and municipal elections in November that "will complement the power map of Peru," said Fernando Tuesta, director of the polling unit for Lima's Catholic University and the former chief of Peru's national vote-counting office.

Copyright 2006 The Associated Press. All rights reserved.This material may not be published, broadcast, rewritten, or redistributed.

This story has been posted in the following forums: : Headlines; Figures; COS - Peru; Politics