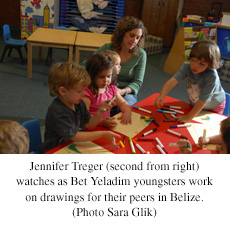 "It's such a mitzvah that you are doing for these children," Mrs. Ostrow told the class. "First of all, sending the toys was a mitzvah because it made them feel very good, and it makes the other children feel good to get mail."

From Howard County to Belize

The children in the 3-year-olds' class at Columbia's Bet Yeladim preschool are getting some special delivery mail these days — all the way from Central America.

The youngsters have struck up a friendship with a preschool class in Belize and are exchanging toys and artwork, and in the process are learning a lesson about children in other countries.

The long-distance connection was made through the aunt and uncle of 4-year-old Hannah Treger. Jeff and Elicia Blumberg are in the Peace Corps in Belize and came up with the unusual exchange program during a visit with Mr. Blumberg's sister, Jennifer Treger, in her home in Columbia.

Mrs. Treger said they were talking about the differences among the children in Columbia and Belize. "It was right after Hannah's birthday party where she got tons of toys," Mrs. Treger remembered. "He talked a lot about the children down there, and it just made me realize how lucky we are here."

In an e-mail sent from Belize, Mr. Blumberg described how the children there don't have many toys to play with. "In our village, any stick or coconut provides an afternoon of entertainment," he wrote.

Mrs. Treger sent a note to Hannah's class explaining that she would like to send some toys to the preschool in Placencia, Belize, where the Blumbergs have been living and working for the past two years. Within a short time, they had collected enough construction paper, crayons, markers and stuffed animals to fill a huge box to mail to the children in Belize.

Mr. Blumberg wrote that the children and teachers were delighted to receive the gifts. "We showed the kids a picture of Hannah, and told them that Hannah and her friends wanted to play with them. Unfortunately, they were too far away so they decided to send the toys as the next best thing."

He said the children started playing with the toys right away and decided to draw pictures for Hannah and her classmates to thank them for the gifts and mailed them to Bet Yeladim.

When the pictures arrived at the school, the 3-year-olds' class teacher, Ellen Ostrow, explained to the children where they had come from. She showed them on a globe where Maryland is located compared to Belize, and they talked about how to get there and how far away it is.

They looked at each of the pictures and discussed how different the children's names are in Belize. Then they decided to continue their correspondence by drawing pictures about their field trip to a farm and sending them to the children in Belize.

"It's such a mitzvah that you are doing for these children," Mrs. Ostrow told the class. "First of all, sending the toys was a mitzvah because it made them feel very good, and it makes the other children feel good to get mail."

The children got to work creating pictures of cows with big teeth, very tall horses and ponies, pigs, cats, suns, rainbows and blue skies. While they might not understand where their artwork is going, Mrs. Treger said there is still a lesson to be learned.

"They understand that there are people who don't have what they have, and it's nice to give to them. That's a great concept for them to get," she said.

Mr. Blumberg, who is originally from Baltimore, and his wife, Elicia, who is from Columbia, joined the Peace Corps in June 2004 and will come home from Belize this summer. Mr. Blumberg is an attorney who opened and operates a Legal Information Bureau in Placencia, a Creole village of about 600 people on the southern peninsula of Belize.

Mrs. Blumberg is working with a community-based non-governmental organization called Friends of Nature. She is helping to develop an environmental education program and is conducting research on the surrounding marine and estuarine ecosystems.

In addition to their work with the Peace Corps, the Blumbergs are involved in community activities in the village, including coaching the Placencia boys softball team and teaching dance and yoga.

The community has just one primary school that goes through eighth grade and a preschool for the 20 or so children ages 3 to 6. Families must pay for their children to attend the high school in another village, so the Blumbergs say many young people are financially unable to attend school past eighth grade. They are hoping to start a small scholarship fund to help the local students continue their schooling.

Whether the children at Bet Yeladim understand the specifics about who their new pen pals are, where they live and how their lives are different may not matter in the end. Their teachers are making sure they understand about doing mitzvot and giving tzedakah.

This story has been posted in the following forums: : Headlines; COS - Beize; The Third Goal