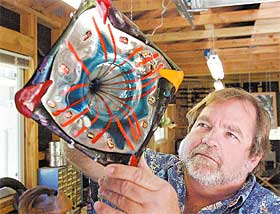 “Not a lot of stained-glass artists incorporate fused glass into the stained-glass process,” he said. “I like it because it gives a little more depth and realism.”

Glass artist fuses his hobby into a business

Caption: Bob Nabours examined a piece of glass art after removing it from the kiln. The artist was in the Peace Corps before teaching in the Ramona Unified School District. Photo: DON KOHLBAUER / Union-Tribune

RAMONA – When Bob Nabours retired from teaching, he decided to take a more serious interest in one of his hobbies. Now his work as a glass artist has become what he terms a “hobby business.”

He calls it Nabourian Creations.

“I wanted to make something unique and different, unique and individual glass art,” he said.

The method he employs is fusing and slumping, using a drop-ring mold to form vases and bowls. He also uses fusing when he makes framed stained-glass pieces.

“Not a lot of stained-glass artists incorporate fused glass into the stained-glass process,” he said. “I like it because it gives a little more depth and realism.”

Nabours said he has plans to combine his glass art with woodworking. Nabours, 58, first worked with wood while in the Peace Corps from 1970 to 1974 helping with the Jamaica Tourist Board.

“That's where I got into doing all the native crafts,” he said.

Sculpting with wood was his early art form. He worked mainly with lignum vitae, a hard wood with black, green and brown grains and commonly found in the tropics.

A piece he calls “Figure L” was entered in the California Exposition in 1976 and won first place.

“At the time, that was what I was going to do for a living,” he said of wood sculpting. “I would sell a piece once in a while. I got tired of being bored.”

So Nabours turned to teaching. And his first job was teaching woodworking.

“I had a teaching credential from when I was in the Peace Corps,” he said.

Ramona Unified School District was looking for someone to teach woodworking in a program the district provided through the county. When administrators found that Nabours could not only fill that position but would also provide his own tools, he was hired.

He later transferred to the high school, where he taught English to special education students. He retired two years ago after 26 years with the school district.

Nabours was included in the Ramona Open Studios Tour in April. He may soon be showing his work at galleries in Escondido.

The one piece he made that's not for sale is a Tiffany-style lampshade with a floral design of peonies.

“I'm not going to make another one of these things,” Nabours said. “It's a beautiful lamp but, boy, it was an awful lot of work.”

It took three months, off and on, to finish and has 811 pieces of glass.

Nabours shows his work by appointment at his studio. For more information about Nabourian Creations, the artist can be reached at (760) 789-9410.

Ruth Lepper is a freelance writer in Ramona.

This story has been posted in the following forums: : Headlines; COS - Jamaica; Art; Glass Art