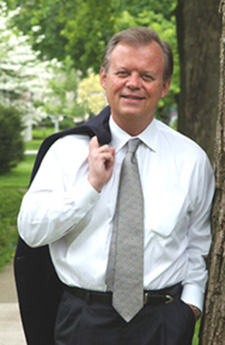 Question: How has President Bush done on fighting world poverty? Answer: I've served under five presidents. He's the best. That always surprises people. But by far, he has given more food aid, more HIV aid and more development assistance, especially to Africa. He doesn't get any credit for this. He should.

'When you pray together ... you begin to trust'

"Tony Hall is a hero to the widest spectrum of Americans and citizens of the world, because of who he is and what he's done for the poor," Mr. Franken writes.

As a longtime Democratic congressman from Ohio, Mr. Hall made world hunger and poverty his focus, once fasting for 22 days to protest the dismantling of a House hunger committee. Mr. Hall continued to press for hunger relief in his just-completed term as U.S. ambassador to the United Nations Agencies for Food and Agriculture.

Changing the Face of Hunger describes how Mr. Hall's born-again Christianity has informed his work, and prompted him to form close friendships and working relationships with Republicans such as U.S. Rep. Frank Wolf of Virginia.

Three times nominated for the Nobel Peace Prize, Mr. Hall expects soon to be back in the fray, working for a nongovernmental relief organization. For now, he's on a book tour. He was in Dallas last month, doing broadcast interviews and speaking at Criswell College. That's where Staff Writer Sam Hodges caught up with him. Here are excerpts from their conversation.

In a highly partisan era, you have managed to make friends across party and ideological lines. How?

I learned, through association with a couple of Republican congressmen and a couple of Democratic congressmen. We would get together to pray. When you pray together and read the Scriptures and talk about your life, then over time you begin to trust each other. We decided to focus on those things that we agreed on, like family values, abortion, human rights, hunger, poverty. It worked fine. We passed a lot of legislation.

What should be done in Sudan's Darfur region, where civil war has left at least 100,000 civilians dead and driven nearly 2 million into refugee camps?

I've been there. The women can't go outside the camps at night or they get raped. If the men go outside, they're killed. These are people who were farmers and also pastoralists [tenders of grazing animals]. They want to go back and plant and get their livestock, if it still exists, but they can't because of the civil war, the corruption, the power, the people who control the guns.

It's a security problem, No. 1. And until it gets secure, nothing's going to happen there. It'd be great if the United Nations could go in there, if they [the Sudanese] would let us. It would be even better if the African nations handled the problem themselves and put their own troops in there, in a large way.

Of the international programs aimed at fighting poverty, which work best?

School feeding is a very good one. When we have school feedings, we get the kids back in school. They're learning, and they get lots of calories and nutrition they could never get at home. Some of these kids are lucky to get a meal every one or two days.

Another program that really works is teaching mothers how to read and write. They get very smart right away. They learn about nutrition, about breast feeding, about boiling water. The kids are healthier, the country prospers and the population goes down.

Why does the population go down?

The mothers see children as their social security. They know some of them are going to die, but they know some will live, so they have eight children and hope that some will be around to take care of them when they're old. But if you teach mothers to read and write, their kids are healthier, and they don't feel they have to have as many.

Is there one national success story you'd point to in Africa?

I can point to a lot of projects that are successful. And I can point to some countries that are doing better than others, like Ghana, Uganda and South Africa. But then I can point to countries that are in trouble, like Zimbabwe. This guy – [President Robert] Mugabe – he kicks all the farmers off and turns the farms over to his family. The first thing the family members do, they dig out the irrigation pipelines and sell them. That's why half the farms don't work. A country that used to feed all of southern Africa now has to be fed.

How has President Bush done on fighting world poverty?

I've served under five presidents. He's the best. That always surprises people. But by far, he has given more food aid, more HIV aid and more development assistance, especially to Africa. He doesn't get any credit for this. He should.

You come at hunger work from an evangelical Christian perspective, correct?

Yeah. I didn't grow up with it. I came to faith very late in life. I was about 37. I didn't come from a family that knew anything about it, or talked about it. None of my friends were believers. I had to go to the Congress of the United States to become a believer. It was in my first term.

How did it happen? Did somebody witness to you?

I had had pretty good success in my life, but I was getting tired of my ambition, my selfishness, my pride. I heard a couple of speakers. Chuck Colson was one of them. Then I went on a search. I searched for about a year and a half, then I went to Congress. A freshman Congress befriended me – a friend from here in Texas, [the late Democrat] Marvin Leath. He helped me a lot.

Is there one verse or story in the Bible that most speaks to you about hunger relief?

There are a couple of verses in Proverbs that I really like. In Chapter 14, God says if you are gracious to the poor "you honor me." And he says almost the same thing in Chapter 19, but in a different way. He says if you take care of the poor "you lend to me." That's pretty amazing.

Why have Democrats struggled with the evangelical Christian vote, and how can they do better?

They've always believed that you shouldn't have to talk about your faith. They've felt your actions speak to what kind of person you are. But they're finding out that the Republican Party has been pretty smart in the way that they've captured that [evangelical] vote. I've talked to Democrats, worked with them, told them, "You've got to start talking about ... [your faith], 'cause people want to know."

People say to me all the time, "How can you be a Democrat and be a Christian?" I don't try to get in an argument, but I might say something funny like, "When Jesus came into Jerusalem, did he come in on an elephant or a donkey?"