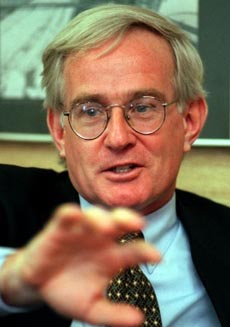 The agreement acknowledges the facts surrounding the City's 2001 contract with the Pittsburgh Fire Fighters Local No, 1 and the benefits Mr. Murphy reaped from his actions and requires the former Mayor to take certain actions to help ensure that future contracts are not awarded in a clandestine fashion Thomas Murphy, Jr., former Mayor of the City of Pittsburgh, PA , served as a Peace Corps Volunteer in Paraguay in the 1970's.

(KDKA) PITTSBURGH United States Attorney Mary Beth Buchanan and M. Chris Breiese, Special Agent in Charge of the FBI, today announced that former Pittsburgh Mayor Tom Murphy has entered into an agreement with the United States of America providing for his active cooperation with City officials and the oversight boards to identify and rectify problems in existing laws relating to municipal labor negotiations and contract awards.

The written agreement resolves a thorough investigation by the United States Attorney's Office and the Federal Bureau of Investigation into the former Mayor's participation in the awarding of a contract with the Pittsburgh Firefighters Union in Spring 2001.

Buchanan says that "Former Pittsburgh Mayor Tom Murphy entered into a cooperation agreement with the United States of America. The agreement acknowledges the facts surrounding the City's 2001 contract with the Pittsburgh Fire Fighters Local No, 1 and the benefits Mr. Murphy reaped from his actions and requires the former Mayor to take certain actions to help ensure that future contracts are not awarded in a clandestine fashion. If Mr. Murphy performs all of the actions required by the agreement within one year and cooperates fully in all debriefings, provides evidence, and testifies before any Court or City oversight entity, the federal investigation will be closed and no federal charges will be brought against him."

"Public corruption is the FBI's highest criminal investigative priority,” Breiese added. “The FBI aggressively and exhaustively investigates schemes that involve either a direct or indirect abuse of the public official's trust, or undermine the integrity of federal, state or local governmental operations, in violation of federal law."

Buchanan said that as part of the cooperation agreement, Murphy admitted the following facts describing the circumstances preceding the May 2001 primary election:

* In late February of 2001, Murphy signed a written agreement with the Firefighters Union guaranteeing that the Union's new contract would prohibit the city from closing any fire stations or laying off any fire fighters, Murphy benefited in that the Union agreed not to picket against him at the Allegheny County Democratic Committee's endorsement meeting, and to not oppose his endorsement by the Allegheny County Democratic Committee.

* In late April of 200l, Murphy agreed to grant the firefighters certain contract terms, Murphy benefited in that the Union's president recommended that the Union endorse Murphy's candidacy for Mayor and not support his opponent, then City Council President Bob O'Connor.

* These two agreements were memorialized through an arbitration proceeding and, as a result, did not receive the scrutiny of the Pittsburgh City Council.

* Finally, the ensuing contract with the Union cost the City of Pittsburgh more money than the City had anticipated.

Beyond the facts to which he consented, Mr. Murphy agreed to the following actions Murphy agreed to assist in investigating the events surrounding the negotiation and execution of agreements related to the 2001 contract between the City of Pittsburgh and the Firefighters Union.

o Murphy agreed to provide full, complete, accurate and truthful information and evidence within his knowledge or control concerning the investigation.

o Murphy promised to provide all documents and/or physical evidence within his possession concerning the investigation.

o Murphy agreed to testify in proceedings in the Western District of Pennsylvania and elsewhere. Murphy will also, when requested, provide information and testimony to the Pittsburgh City Council, the Act 47 Board, and any state or local court regarding the events of 2001 related to the contract negotiations with the Firefighters Union.

"It is questionable whether the City's 2001 contract with its firefighters was advantageous to the City of Pittsburgh,” Buchanan said. “The manner in which this contract was entered, however, was clearly not in the best interest of Pittsburgh. This investigation has revealed a flaw in the process by which municipalities negotiate and contract with public unions, This process should be reformed to prevent this type of activity from occurring again."

This story has been posted in the following forums: : Headlines; Figures; COS - Paraguay; Politics; City Government; Crime