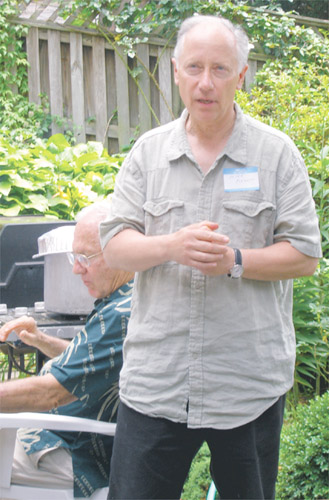 The former volunteers of Nepal III traveled from near and far to attend the reunion. The majority of them had not seen each other for 40 years. Richard Wanner, better known as "Captain," came all the way from his home in New Zealand for the event.

Caption: Retired U.S. ambassador Peter Tomsen, takes a moment to thank everyone for coming to the Nepal III 40-year reunion, held at his home in McLean last weekend. Photo by Aranya Tomseth/The Connection

Retired U.S. ambassador Peter Tomsen, takes a moment to thank everyone for coming to the Nepal III 40-year reunion, held at his home in McLean last weekend.

McLean resident Peter Tomsen has always had fond memories of his experience as a Peace Corps volunteer in Nepal, and often wished that he could arrange a reunion with the other members of the "Nepal III" group. Last summer, the retired U.S. ambassador decided that there was no longer any reason to put it off.

"When you're working and raising a family, it makes it very hard to have a reunion," said Tomsen. "We were always busy and didn't have the time, but now most of us are retired or semi-retired, and we do have the time."

Tomsen called friend and former Nepal III volunteer Lucy Sotar and proposed the idea. Sotar, who is retired and living in Arlington, agreed that a reunion was most definitely in order, but said that it would take some time as they would have to track everyone down. Sotar, Tomsen and several other former volunteers spent the past year doing just that, and their efforts were not in vain. There were 51 members of Nepal III, and Sotar was able to find or account for all but two. Six members of Nepal III had passed away, and the remaining 43 members showed up for the 40-year reunion at Tomsen's McLean residence on June 24.

"At first people seemed a little reluctant, but once I started finding everyone, they seemed more and more interested in the idea as we went along," said Sotar.

The former volunteers of Nepal III traveled from near and far to attend the reunion. The majority of them had not seen each other for 40 years. Richard Wanner, better known as "Captain," came all the way from his home in New Zealand for the event.

"It's an instant bond," said Wanner of the Peace Corps experience.

William Robinson came from Raleigh, N.C. for the reunion.

"We all have college and high school reunions, but this is such a unique experience," said Robinson. "It's great to be here."

Several of the members made references to the fact that they always considered themselves to be a "band of brothers and sisters."

"All Peace Corps groups have a tight bond," said Tomsen.

NEPAL III was the third group of Peace Corps volunteers to offer its services in the remote south Asian country. In 1964, the group came together for a rigorous training session in Hawaii. Those who made it through then went to Nepal for a one to two-year post. Some of the volunteers worked as foresters, but most were there to help out in a teaching capacity.

The members of Nepal III joined the Peace Corps for a variety of reasons, but many of them became interested after seeing President John F. Kennedy speak about the Peace Corps at colleges and universities across the nation. Kay Bishop was inspired to join the Peace Corps after Kennedy's assassination.

"It's the most interesting group that I've been with in my entire life," said Bishop. "They are all just such incredible people with such interesting backgrounds, and they have certainly gone on to do a lot of interesting things."

Lucy Sotar said she joined the Peace Corps because she "didn't have the slightest clue" of what to do with her masters degree in English, and because she was "very idealistic and wanted to give something to the world."

THE FORMER members of Nepal III arrived in Virginia on Friday, June 23. With the exception of one or two people, the members stayed with various Peace Corps volunteers in the Washington metro area. On Friday evening, the group got together to watch slides of old photos that were taken during their tour. On Saturday morning, Peter Tomsen went to Greenberry's Coffee in McLean with his houseguests.

"We just talked and talked and talked," said Tomsen. "You have all of these interesting stories that you can tell about your experiences. We had teachers and foresters, but we were all one."

On Saturday afternoon, a picnic was held in the garden of Peter Tomsen's home in McLean. The old friends and co-workers took a moment to remember those who had passed, and took turns sharing their memories and stories of Nepal.

Lucy Sotar said that organizing the reunion with everyone had been a "wonderful experience," and she thanked those who had helped her out.

"It gave us the chance to get in touch with everybody, and it brought all these memories back that were so important to me," said Sotar. "Almost all of you have done things that are in the spirit of the Peace Corps, and that spirit is with all of you."

The group also took a moment to sing the Nepali national anthem, before watching another slideshow. On Sunday, June 25, everyone met at a Nepali restaurant for a farewell lunch. Tomsen said that he was thrilled with the high turnout and success of the reunion.

"Everyone parked their cars across the street, and as they walked up the driveway, all you heard was shrieks and howls," said Tomsen. "I choke up when I think about it — we really are a band of brothers and sisters."

This story has been posted in the following forums: : Headlines; COS - Nepal; COS Groups