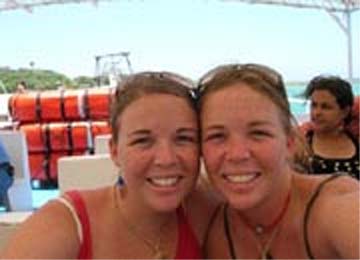 Lauren is currently serving in Nicaragua, where she is teaching English to students aged five to 45 and helping to form a community bank that will ultimately fund a chicken co-op project in the village. Her sister Connie is working as a youth volunteer in Honduras, and recently returned from the first annual national youth baseball tournament where she coached a little league team from her village.

Twin Sisters Follow Their Family’s Footsteps into the Peace Corps

In celebration of the 45th anniversary, this is the fourth in a series featuring Peace Corps legacy families.

WASHINGTON, D.C., July 5, 2006 – Growing up, twin sisters Lauren and Connie Head, 24, were constantly exposed to Peace Corps tales. Not only did their parents, Doug and Lyn Head, serve in the late 1960s, but their aunt, two uncles, and two cousins were volunteers as well.

“With our large Peace Corps family and numerous Peace Corps friends, we wanted to make sure that the girls did not feel any expectation to join the Peace Corps, but of course we were very proud of their decisions,” said Doug Head, the father of Lauren and Connie, both of whom followed in the family footsteps to the Peace Corps.

Lauren is currently serving in Nicaragua, where she is teaching English to students aged five to 45 and helping to form a community bank that will ultimately fund a chicken co-op project in the village. Her sister Connie is working as a youth volunteer in Honduras, and recently returned from the first annual national youth baseball tournament where she coached a little league team from her village.

Although Connie and Lauren’s parents do their best to avoid giving unsolicited advice, they both appreciate the wealth of understanding their family provides. “One major advantage we have in having a family with so many returned Peace Corps volunteers is that they understand why being a volunteer is so important and what motivates a person to leave their family and friends in the U.S. and take off to a developing country for two years,” wrote Connie from Honduras.

And like most legacy families, they can compare stories and experiences.

Doug and Lyn, who served in the 1960s, point to technology as the most dramatic change in the Peace Corps experience over the years. While Connie and Lauren are able to communicate with their family and each other about once a week via cell phone or e-mail, their parents remember using “snail-mail” as the only means of communication. “Each time we get an e-mail or talk with them on their cell phones, I marvel at the difference in accessibility volunteers have now,” said Lyn Head. “With instant communications, volunteers today can have one foot at home and one foot in their host country.”

Another major difference has been the training methods Peace Corps uses before sending volunteers to their site. While Doug trained in Fort Lupton, Colo., before heading to Afghanistan in 1967, Connie and Lauren both trained in-country, a method he feels is much more effective. “Our training was exceptionally paternalistic. It felt like Survivor Fort Lupton,” Doug said. “I think in-country training was a great learning opportunity for my daughters to live with host families, both for the language and the cultural immersion.”

Both parents have high hopes for their daughters’ Peace Corps experiences and the impact service will have on their lives. “I hope they will come to appreciate the unique experience of immersing themselves in the culture of their countries, that they will come to understand the privileges and relative wealth that we have as Americans and that they will return home with the desire to make their future community and the rest of the world a better place,” Doug said. His wife agreed. “I hope they will find ways to stand in solidarity with the people and cultures they’re coming to know through their Peace Corps service.”

Many other volunteers have supportive families at home, yet Connie said that it’s not the same, since their family members cannot always relate to the overall Peace Corps experience. Lauren agrees that the twins have a definite advantage by serving close together and having a family of returned volunteers at home: “It’s definitely nice to be able to talk to Connie, my parents, aunts or uncles, whether it’s to share frustrations, successes, or ask for advice and they really know what I’m talking about or how to advise me.”

Although Connie and Lauren were very busy during the first few months of service getting their projects off the ground, they were able to have a reunion in April when Connie visited Lauren in Honduras. Both twins were eagerly anticipating the visit, since it was the longest they had ever gone without seeing one another.

More than 5,000 Peace Corps volunteers have served in Honduras since the Peace Corps first entered the country in 1963 as one of its earliest ventures. Peace Corps’ program has helped achieve many positive results to combat poverty, including the expansion of the national education curriculum and creation of a national park system and water and sanitation systems. As the largest program in the Inter-America and Pacific region, volunteers work in the areas of child survival and health, business development, management of protected areas, water and sanitation, youth development, and municipal development. Today, there are 231 volunteers in the country. To learn more about Honduras, please visit the Where Do Volunteers Go? section.

Currently, there are 167 Peace Corps volunteers serving in Nicaragua. The Peace Corps began service in the Central American nation in 1968 and continued until 1979. In 1991, the program reopened with a special focus on developing new areas of service within Nicaragua in conjunction with the Ministry of Health and the Ministry of Education. To date, over 2,000 volunteers have served in Nicaragua. To learn more about Nicaragua, please visit the Where Do Volunteers Go? section.

This story has been posted in the following forums: : Headlines; COS - Honduras; COS - Nicaragua; Twins