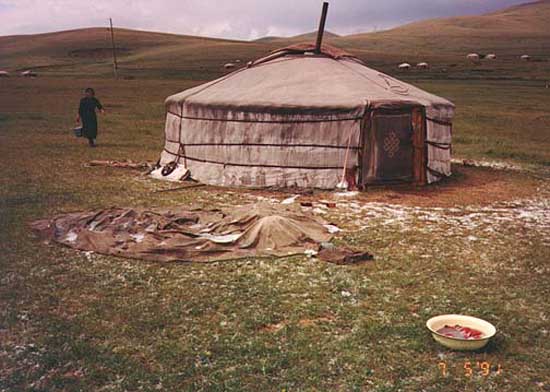 Mongolia is about the same size as Alaska--2,000,000 people. Herding is one of the main industries. Mongolians are immensely talented at painting and drawing and in making things out of wood and wool. They get vegetables and fruit from China. They grow some cucumbers and peppers. Their only meat is mutton, and they eat the fat and view it as a source of energy.

ABINGDON-The Rotary meeting on June 28 at Abbe Lanes Restaurant was both entertaining and festive. It was a cooperative effort between Art Spires who furnished the colorful decorations and Clarke Sherman who furnished the speaker. The Rotarians, their spouses and guests knew they were going to see and hear something special when speaker Sid Fey arrived and made several trips back to his car to carry in many things he had brought with him for a “Show and Tell.’’ Sid recently returned to the U.S.A. after spending two years with the Peace Corps in Mongolia. Sid thanked Rotarians for inviting him to speak and mentioned his father, Sidney Fey, Sr. Sid graduated in 2000 from Avon High School and attended college in St. Louis.

Mongolia is about the same size as Alaska--2,000,000 people. Herding is one of the main industries. Mongolians are immensely talented at painting and drawing and in making things out of wood and wool. They get vegetables and fruit from China. They grow some cucumbers and peppers. Their only meat is mutton, and they eat the fat and view it as a source of energy. They eat fried noodles with the mutton. Sid said he was grateful for the Pepto Bismol in his medical kit. He is thankful for Illinois weather as opposed to that in the Gobi desert region. But in part of the country, however, the soil is fertile and rainfall plentiful. The western region is mountainous. In his area, it rained once every six weeks. It was 20 below zero all winter.

Most schools have dormitories. There is a bad lack of finances. Students work when they can and go to school when they can. Sometimes their education is delayed several years. Students pick up cans and bottles. Some of his seventh grade students were ages eleven and seventeen. In the ninth grade was one 28-year-old. Tenth grade is for college prep, and he had twelve in that class. He taught grades 7, 8, 9 and 10.

His enthusiasm was catching as he told of his experiences and showed his items. There was a sturdy small foot stool painted bright orange, mirror, cap with fur, scarf, jackets, vest and other clothing plus two bottles of vodka which he said cost $1.20 and $3 a bottle. Alcoholism is a problem in Mongolia.

A large blanket/wall hanging he showed probably took four or five women four months to make by hand. The beautiful blankets become family heirlooms. Another one was made in 1980. Still another made in 1964 by one older lady--took her about five months. An attractive vest was made by a Mongolian language teacher and was given to Sid by the school as a going away present. A handsome leather and fur hat was from his host-mom to his mom. He became identified as “The foreigner who wears green.’’ This was because of a certain jacket he usually wore.

Some Mongolian money and photos of some of the people were passed around. Sid had maps on the wall to show where he had spent his time.

After Sid gave his talk and showed his items, the crowd wanted to hear more, and many hands came up to ask questions for an extra half hour.

He was asked about entertainment, and said on weekends, he would just eat, hang out and play billiards; there was wrestling and archery. There was only one movie theater in the entire country with three screens. There is big emphasis on family in Mongolia. Someone is always home. Sid had four host brothers and four host sisters. There is no privacy in the small homes. And their customs are so different from, for instance, Japan and Korea. In those two countries, people sit on the floor. In Mongolia, you don’t sit on the floor, and you don’t pile books on floor. Books are so expensive, it is considered disrespectful if you don’t treat them well.

Sid added that there are a lot of single women in Mongolia, but they don’t intermarry with other countries; there is no opportunity. Because of Soviet domination, people could not travel out for 70 years. There are complex ties between Russia and China. Mongolia declared independence and left China, but Russia still makes the rules. If you are foreign and white, they assume you are Mongolian and Russian; that was what they thought Sid was.

One person asked if he would go back, and he said he definitely would for a visit. He made a best friend who was the only English person in the town. Another asked why he chose Mongolia. He didn't actually choose Mongolia. He was assigned to Mongolia after he signed up with the peace Corp. Then another asked why go to the Peace Corps? Sid said he decided when a sophomore in high school that he wanted to do some kind of service--do something different. He smiled and said his Mom was less than thrilled. It wasn't for the money; the pay was $2,000 a year.

Incidentally some of the questions the Mongolians asked Sid was about Bill Clinton and Iraq. He was not allowed to discuss religion. He had the opportunity to meet the President of Mongolia.

This story has been posted in the following forums: : Headlines; COS - Mongolia; The Third Goal