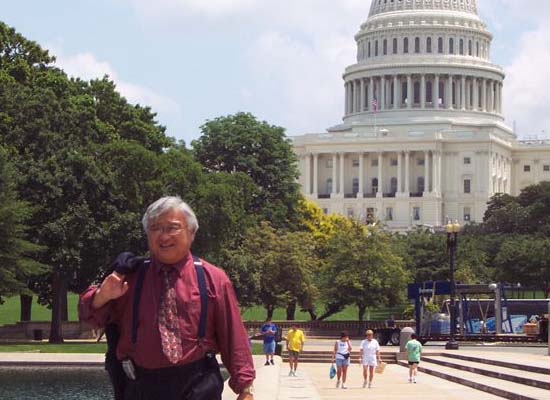 Honda criticized the promises made in the run-up to the war in Iraq, such as assurances that America would not become an occupying force. He surprised the crowd by informing them that America has plans to construct 14 permanent military bases in the war-torn country. Seven of those bases, he said, have already been constructed, with the larger ones taking 30 minutes to drive across. Congressman Mike Honda of California served as a Peace Corps Volunteer in El Salvador in the 1960's.

Gilroy - Congressman Mike Honda visited Gilroy this week to discuss fiscal responsibility and the lack of it at the federal level, but a few dozen residents had other issues on their mind.

Honda, a former principal who is now wrapping up his third term as Silicon Valley's congressional representative (D-San Jose), donned his cap as a former educator Wednesday night to walk residents through a slide show at the Gilroy Senior Center.

A sharp upward spike in the nation's yearly budget surpluses started in 1992, he pointed out, attributing the 10-year trend to passage of the Balanced Budget Act and fiscal discipline during the Clinton years. By the time George W. Bush entered the White House, the nation had a $236 billion budget surplus, he said. Tax cuts combined with increased spending under the Bush Administration and Republican-controlled congress have swung the country in the opposite direction, creating a deficit of more than $400 billion, Honda said.

"We've taken this country in the wrong direction for American families in terms of fiscal policy," Honda concluded.

Though the hour-long lecture focused on the effects of fiscal policy, other topics were topmost in the minds of attendees. Questions submitted on index cards spanned everything from education to health care to the Middle East crisis.

Honda said he would not support amnesty for illegal immigrants, but preferred a broader solution that includes a "pathway to legalization" and efforts to address financial hardships wrought in Mexico by the North American Free Trade Agreement.

He said he would support universal health care access, but said the country first needs a plan to finance it.

Honda criticized the promises made in the run-up to the war in Iraq, such as assurances that America would not become an occupying force. He surprised the crowd by informing them that America has plans to construct 14 permanent military bases in the war-torn country. Seven of those bases, he said, have already been constructed, with the larger ones taking 30 minutes to drive across.

"It was a very informative presentation," said Artie O'Connor, a Gilroy resident who said the war in Iraq is her topmost concern. "I hope congress will find a way to end the war and bring our troops home."

"He gave us a little hope," Kawamoto said.

But at least one resident saw the evening as a politically motivated opportunity to bash Republicans, despite Honda's statements that fiscal responsibility is a non-partisan issue.

"I thought he presented some generally good ideas, but lacking in the specificity I would expect from my congressman," said Elizabeth Sanford, president of South Valley Republican Women Federated. "He presented the problems, but all of his solutions were very general."

Honda offered a few solutions in response to the criticism.

"Change leadership, balance the budget, pay down the debt," he said. "We have so much work to do, it's going to be painful."

This story has been posted in the following forums: : Headlines; Figures; COS - El Salvador; Politics; Congress; Iraq