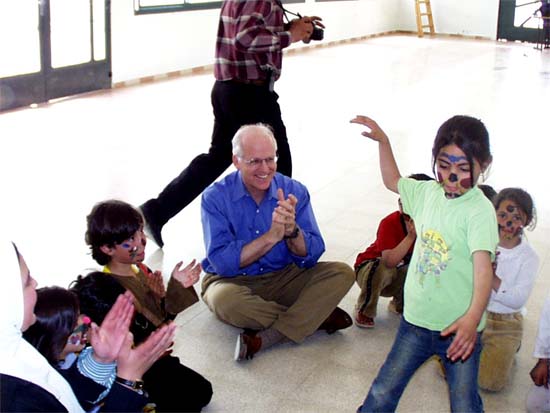 "We should be able to tell the American people what kind of timeline we can have to begin to draw down our troops," he said. "It may be a timeline the American people don't want to hear. It may not be something that brings them out quickly." Congressman Chris Shays of Connecticut served as a Peace Corps Volunteer in Fiji in the 1960's.

Lieberman Declines To Rule Out Shays Call For Troop Withdrawal

Caption: Congressman Chris Shays visiting a children's center on the West Bank in 2003. Chris Shays has made 14 trips to Iraq and was the first Congressman to enter the country after the war - against the wishes of the Department of Defense.

WASHINGTON -- Sen. Joe Lieberman, the three-term Democrat whose independent campaign for re-election is being seen nationally as a referendum on the Iraq war, said Friday he would consider taking a look at a fellow lawmaker's proposal for a timeline for troop withdrawals from Iraq.

The proposal was floated by Republican Rep. Chris Shays, another Connecticut politician facing a tough re-election battle with an anti-war candidate. Shays has long been a supporter of the war and previously has opposed withdrawal timetables.

"It seems to me that Chris is saying, maybe we ought to set some goals for when we want to get out and I'd like to see what he has in mind before I comment on it," Lieberman said while campaigning in New Haven.

Shays proposed a timeline Thursday on a telephone conference call from London with reporters following his 14th visit to Iraq since the U.S.-led invasion in 2003.

Lieberman, the Democratic nominee for vice president in 2000, lost in this month's Democratic primary to millionaire businessman Ned Lamont, who campaigned against Lieberman's support of the war and called the senator too close to Republicans and President Bush.

A centrist who is popular with Connecticut's Republican and unaffiliated voters, Lieberman has filed petitions to run for re-election as an independent.

"If he decides that Chris Shays is wrong ... we'll see what kind of rhetoric he uses and if he lumps him in with Ned," he said.

Shays is under fire for his support of the Iraq war in his race against Democratic challenger Diane Farrell. Shays narrowly held off Farrell's challenge in the 2004 election.

"I don't think Chris needed to go to Iraq 14 times to know it's a mess," she said. "To have a timeline, there needs to be an exit plan. There's no exit strategy."

© 2006 by The Associated Press. All rights reserved. This material may not be published, broadcast, rewritten or redistributed.