Journalist Beth Duff-Brown, is in the Democratic Republic of Congo where she was a Peace Corps volunteer from 1979 to 1981 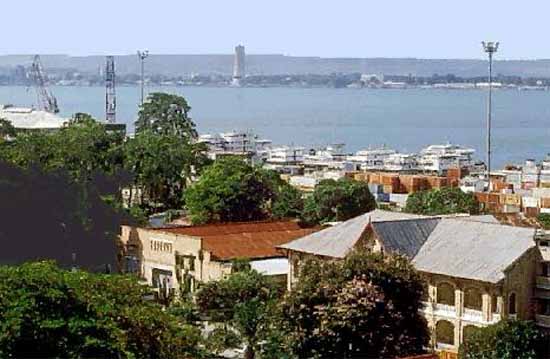 "The last time I was here in 1997, it was a treat to find Belgian chocolate. Rebels were approaching the city and dictator Mobutu Sese Seko's days were numbered. Since then, nearly 4 million people have died from civil war, poverty, AIDS, malaria, and other disease. Yet, there are vine-ripened tomatoes from Belgium, Pedigree-brand dog food, Doritos, and cans of imported whip cream. Who would even want these items? Who has the time or inclination to shop for imported goodies when only last week 31 people were killed in Kinshasa?"

Journalist Beth Duff-Brown, is in the Democratic Republic of Congo where she was a Peace Corps volunteer from 1979 to 1981

AP Blog From Visit to Congo

-- AP chief of bureau for Canada, Beth Duff-Brown, is in the Democratic Republic of Congo, which she visited many times as a West Africa correspondent in the mid-1990s. She has returned to visit to a remote village in central Congo, where she was a Peace Corps volunteer from 1979 to 1981.

I just got approval to hop on a U.N. cargo plane bound for Kananga tomorrow morning at 5:30. I could take a commercial flight, but virtually every airline in the Congo has been deemed unsafe by international aviation organizations, and what with my fear of flying, I'll take a pass. We're trying to get a pass for my translator Kamanga as well, so he can travel with me. The only words I remember in Tshiluba are "Moyo mamu," "Malu kai?" and "Malu bimpe." Hey ma'am. How are you? I'm good.

Kananga is the provincial capital of Kasai Occidental, in southwestern Congo, and the closest city to the village where I served in the Peace Corps. The volunteers from around Kasai used to go into Kanaga every few months for shots, anti-malarials, mail and usually a round of Simba beer. I'd also stop by the Catholic mission to pick up mail and supplies for my school.

From there I'll see if I can hitch a ride with missionaries or aid workers, or see if the freight trains are running again. The village is only about 100 miles south of Kananga, but with no paved road, it can take us a full day by jeep. The rainy season has just started, so I'm eager to get there before the roads become unpassable.

I'm also eager to get there by Monday, when schools open nationwide. It would be a hoot to walk into one of my old classrooms on the first day of school. The Institute Untu, where I taught English, was once a nationally recognized high school run by the Belgians. I remember running down the path in the morning, usually late, to stand with the kids in their white shirts and blue skirts or slacks, proudly singing "La Zairoise" _ the country was known as Zaire then _ with their hands over their hearts as the flag was raised.

This afternoon, Kamanga and I walk through the hugh open-air market in Gombe, the commercial and administrative capital of Kinshasa. I want to check out the goods and chat with folks about politics and the economy. Everything from dried fish to used sandals from India is available. People are funny and friendly as always, yelling out greetings and making fun of my green sneakers. But they say times are hard.

Pablo Kongolo, 33, sells the short wigs and long hair extensions that I've seen a lot this time around, instead of the intricate cornrows of days gone by. The wigs are made in China and imported via Nigeria. He charges five to 15 bucks; on a good day he makes just enough to eat.

"At the time of Mobutu, it was good," he says, as other vendors shout in agreement. "Now it's like someone has dug holes in the ground, stuffed us in, and strangled us."

Aimee Marte, 50, sells "pagnes," the batik fabric that many African women wrap around their bodies like sarongs or sculpt into elaborate headgear. Some of the fabrics sport the smiling faces of political candidates, the pope, and singers or actors.

Her "super wax" from Belgium costs $90; but she concedes she's not selling much of those. The standard Congolese pagne _ six yards that are used for the wrap and blouse _ costs 10 bucks. On a good day, she says, she makes $20; six years ago it was more like $100.

She said inflation and the fluctuating Congolese franc are killing her.

Aimee might buy each pagne at $10 each from her dealer, then sell them in the market for $12. But then, when she goes to buy her next stock, the wholesale price has gone up to $12, so she's lost her $2 profit. Yet like so many others here, she's happy to talk, jokes with me, asks about my family. I ask her how the Congolese manage to maintain their well-known charm and humor.

"We've had so much pain, so why be sad? With the grace of God, we just keep smiling," she said.

Just spoke to our 8-year-old, Caitlin, via the Internet; a long, leisurely call over the Internet, a conversation that would have been near impossible when I first came here 27 years ago. It was so good to hear her tell stories about visiting Grandma Stephie in California, then sign off by shouting at the computer: "I love you bigger than the, um, what is it, the Kanga River?"

To find her a gift today I went to the Memling Hotel _ a five-star accommodation too pricey for my taste and budget _ where outside are craftsmen who cleverly market cool kitsch, items that their own families would roll their eyes over. Ten years ago, my husband got a great little faux camera made out of bent copper wire, complete with flash.

Today, a guy rushes me with a small painting of "Tintin au Congo," taken from a famous series of comic books on which all Belgians and Congolese were raised. I never cared for the comic about a reporter and his adventures around the world, as well as in this former Belgian colony. But this painting, done on the back of a flour sack, was so over-the-top tacky and the artist looked so hungry, I figure it makes a nice addition to Caitlin's African collection. Though she was born in Malaysia and lived in India for nearly five years, I remind her that the prayers that preceded my pregnancy with her came from my Peace Corps village in central Congo and are part of her unconventional heritage.

Another reminder of home today, seeing dozens of new Nissan X-Trails bumping along the potholes of Kinshasa. It's the same SUV that we have back in Toronto, but not sold in the United States. Here the Parliament arranged a bargain price for its 500 members. They stand out in a country where most cars are decades-old Renaults and gas costs about $4 a gallon.

Driving back from NBA basketball star Dikembe Mutombo's new hospital on the outskirts of the city, I see a cherry-red Mazda sports car by the side of the road in a neighborhood they call "La Chine," or China, because it's so congested. Kinshasa has about 8 million people, many of whom live in nothing more than plywood shacks with tin roofs, surrounded by concrete, dirt and rubbish. With only some 600 miles of paved roads nationwide, cars are a luxury, and a convertible sports car really shouts for attention.

I ask the driver to pull over so I can see who owns such a car. Turns out it belongs to the entourage of a large woman, dripping in gold chains, who is barking at a cameraman to get in closer, as she takes a shovel and appears to help clean out a stinking, backed up sewage drain.

When I ask what on earth she's doing, I discover she's a political worker for President Joseph Kabila, making a campaign ad about how her boss would make all this go away. All you have to do is vote for him in the upcoming runoff against rival Jean-Pierre Bemba.

Who can afford these items at City Market in downtown Kinshasa?

According to the U.S. State Department, the average income in the Democratic Republic of Congo is a hundred bucks a year. Only the well off or well connected and, from what I could see today, mostly foreigners: U.N. peacekeepers, aid workers or the Indians and Chinese who now dominate much of the city's trade.

The only locals I saw at the American-style grocery store were "domestics" shopping for their madams, the check-out clerks who tallied up items on a digital register, and grocery boys packing goods and avoiding eye contact. Because inflation fluctuates daily and the rate of the Congolese Franc _ today about 460 to the dollar _ changes so often, goods are marked with code numbers that coincide with daily printouts of prices posted at the end of the isles.

Mercedes cars and Japanese SUVs with U.N. and relief agency logos are lined up out front, as they were last night at Chez Gaby, a popular Portuguese restaurant with a well-stocked bar and apple-cheeked Gaby, who greets patrons with offers of chocolates to enjoy with their aperitif.

The last time I was here in 1997, it was a treat to find Belgian chocolate. Rebels were approaching the city and dictator Mobutu Sese Seko's days were numbered. Since then, nearly 4 million people have died from civil war, poverty, AIDS, malaria, and other disease. Yet, there are vine-ripened tomatoes from Belgium, Pedigree-brand dog food, Doritos, and cans of imported whip cream.

Who would even want these items? Who has the time or inclination to shop for imported goodies when only last week 31 people were killed in Kinshasa?

The interim results of the first elections in more than four decades were announced and rival factions had taken to the streets.

My new colleague Shafiq _ the cousin of a friend from Toronto, ordered to watch over me _ pushed his shopping cart and shrugged off the horrors of the last decade, saying they haven't really hit Kinshasa. Sure, the family bakery had to close last week, but they're back to baking bread. He conceded people are tense and expect more ugliness when the runoff between President Joseph Kabila and former rebel leader Jean-Pierre Bemba is held in October.

Until then, the well-to-do shop at City Market, enjoy wireless Internet, juggle their cell phones. Yet, no one appears to be using the city's first ATM machine and few have applied for the first offered MasterCard, he said. Instability trumps convenience.