RPCV Janet Littlefield has built an orphanage in in the village of Chigamba to shelter, feed, and give medical care to homelss children 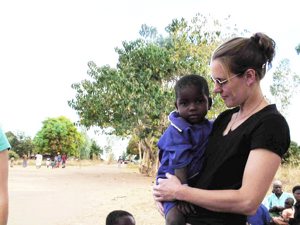 Littlefield said during the next few years she would like to raise between $30,000 and $40,000 annually to expand the orphanage and build a medical clinic, dining room and library, a roof for the schoolhouse and more living facilities to take in more orphans.

RPCV Janet Littlefield has built an orphanage in in the village of Chigamba to shelter, feed, and give medical care to homelss children

HEBRON - Before there was an orphanage in the village of Chigamba, Malawi, homeless children had to survive by begging, often wearing the only clothes they owned.

But since 2003, with the dedication and donations of a 30-year-old teacher at Hebron Academy who has built an orphanage there, local children have been sheltered, fed and given medical care.

And the orphanage is impacting more than just children in Malawi. This summer, Janet Littlefield brought four teenagers from the academy with her to Chigamba for a month-long trip that affected the students and fortified her mission.

"It changed their lives going there; they think differently," Littlefield said about the students. "The other part was for the orphans and to show them that we care and others care and to trust that we will be there to support them."

Littlefield, a science teacher originally from Union, started the home in 2003 with money she donated from her teaching salary and from fundraisers. Since then, the orphanage has grown from 20 children to 56. They are cared for by a staff of 14 teachers and workers.

An international AIDs charity called Avert reported that in 2005 more than half a million children in Malawi had been orphaned by AIDs. By 2003, roughly 14 percent of the country's adult population had been infected with HIV, according to data from the United Nations Development Programme.

Littlefield first went to Malawi as a Peace Corps volunteer after she graduated from Skidmore College in 1998. She was assigned to teach in the Ntaja region in the small, landlocked African nation tucked between Tanzania, Mozambique and Zambia.

While there, she funded the education of an orphan almost her age name Shaibu Kaliati, who today is the director of the Little Field Home, named by the staff in honor of its founder.
Submitted photo Janet Littlefield of Hebron Academy is surrounded by children from the Littlefield Orphanage, which now shelters and educates 50 children. .

During the recent trip to Chigamba, the four Hebron Academy students slept on the cement floor of the home along with the children, living without electricity or running water. They taught seminars on nutrition, AIDs, goat husbandry and health.

The group was met with singing by the villagers.

Sarah Irish, an academy senior, said the rough living conditions were made bearable by the hospitality of the villagers. "There is no running water, the bathroom was a hole in ground, but the people were really nice, so you didn't notice," she said.

"It's always been my dream to help other countries and impoverished places," Kelley Hilton, another student on the trip, said recently. While there, she taught basic health care, such as how to wash hands, apply band-aids and use toothbrushes.

Hilton graduated from the academy this spring and is studying pre-med at the University of New England. She described being astonished by how much the people in Chigamba appreciated small things, even what she considered trash.

"We had a flashlight container, a plastic case you carry flashlights in," Hilton said. "The next day it was a toy."

Irish taught a course in nutrition. "It was just stuff I knew from living in America, from having access to things." She continued, "Going to third world countries you think people are going to be very upset, but they just want to be able to live where they live, but healthily."

Amanda Robinson, now a freshman at the University of Maine, helped workers with their goats to improve breeding and successfully birth healthy kids, based on her own experience raising sheep, Littlefield said.

Laurisa Barthen, a senior at the academy, ran an AIDS/HIV workshop in Chigamba Village. She also recently raised $1,500 for the home in a fundraiser in her hometown of Atlanta, Ga. held at a restaurant that allowed her to throw a silent auction and wine tasting event.

Littlefield said during the next few years she would like to raise between $30,000 and $40,000 annually to expand the orphanage and build a medical clinic, dining room and library, a roof for the schoolhouse and more living facilities to take in more orphans.

A spring walk-athon in Hebron raised $5,000, and matched with $2,000 from other donations, the orphanage was able to buy a minibus. The bus provides an income to the home because it serves as a taxi for locals.

The home costs about $1,000 a month to run and to feed even more children than it houses. Last spring, Littlefield officially launched a nonprofit called Friends of Little Field Home, and information is available on the home at www.littlefieldhome.org .

And Littlefield hopes to keep going, creating a chain of orphanages based on this model.

"My goal is this is not the last orphanage to help," she said. "It is so hard for me to watch kids who have no opportunity to improve their life. Every kid deserves to have all that."

This story has been posted in the following forums: : Headlines; COS - Malawi; Service; Children; Orphans