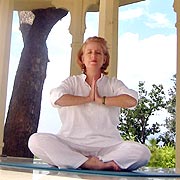 "After a grueling stretch of juggling work, motherhood and nagging illnesses that come with eight years of Third World living, I was craving a break. I determined that since I was in India — land of yoga gurus and mystical Hindus — I should combine my Western inclination toward self-pampering and the Eastern penchant for self-awareness."

RISHIKESH, India — I stood yawning on a dusty platform in the dilapidated New Delhi railroad station, squinting as shadows took form with the slow rising sun.

Barefoot porters, their heads piled high with burlap bundles, tripped over my feet. The odors from street urchins who pick at debris along the tracks and the sacred cows who roam free forced me to cover my mouth like so many other impatient passengers around me.

Then, a sun-weathered man, his head wrapped in a crisp red turban, pulled a wooden rickshaw alongside me. I turned suddenly to face mounds of black cloves — the smell a reminder of Christmas and my faraway family — and a toothless smile with a nod of the head.

My eyes filled with tears. It seemed like months since I'd stopped to simply smile at a stranger or acknowledge a wonderful smell or beautiful sound.

My morning began with that sweet smell of hot cloves; my night ended in the cool Himalayan hills, with chattering cicadas amid the rustling eucalyptus leaves.

My quest for rejuvenation was well under way.

Many working moms dream of having several days away from the office, and even their homes, just to gather their thoughts and catch up with themselves.

After a grueling stretch of juggling work, motherhood and nagging illnesses that come with eight years of Third World living, I was craving a break.

I determined that since I was in India — land of yoga gurus and mystical Hindus — I should combine my Western inclination toward self-pampering and the Eastern penchant for self-awareness.

"Life should start with us. If you are in peace, then you will exude peace, even if someone else has created fire," a guru told me several days after I began my Indian retreat.

I've been taking yoga classes on and off for the three-and-a-half years we've lived in India, but never consistently enough to find that so-called third eye, or to tighten and tone like the yoga aficionado, Madonna.

Managing four Associated Press bureaus in South Asia is a dream journalism job which combines breaking news, funky features and fascinating people and places. But it's demanding work and left me with little time for myself.

As our 6-year-old daughter, Caitlin, said: "You need to have a little private time, right, Mama?"

Right, some private time.
If you go ...
Getting there: Ananda is 160 miles north of New Delhi, a five-hour drive by car or four hours by train.

Cost: From $220 for single to $350 for double per night; includes spa meals, yoga consultations and various spa treatments.

Contact: Ananda In The Himalayas. Telephone 91-11-2689-9999; www.anandaspa.com. Americans need visas and can apply for them at Indian consulates.

I chose four days at Ananda In The Himalayas, a luxury health and yoga spa overlooking the River Ganges and Rishikesh, among Hindu's holiest sites and the birthplace of yoga. Lord Brahma, the Hindu god of creation, is said to have meditated in these foothills.

Nestled in the isolated Sal Forest estate of the current Maharajah of Tehri-Garhwal, Ananda is not an easy destination. But getting there is part of the experience.

The train from New Delhi takes four hours to reach Hardiwar, another sacred town in the northern state of Uttaranchal. Then comes another hour of slow rambling through Rishikesh and up the steep, windy roads into the Sal Forest, mere miles from the borders of China and Nepal. Spider monkeys and warning signs to drive safely ("Heaven doesn't want you yet") line the narrow, two-lane road.

The first thing you see when you reach Ananda is a princely palace, its 19th-century facades awash in pale yellow and mossy mildew. There are hundreds of these palaces in India, but the American in me never tires of such foreign, antiquated splendor.

The old wing of Ananda is housed in an annex built for a visit by the British viceroy in 1910. Visitors are welcomed by a duo sitting cross-legged on checkered tile, playing a traditional tabla drum and violin. A string of "rudraksh" seeds go around your neck. The round seeds, known as the tears of Lord Shiva and used in India and Nepal for thousands of years, are believed to stabilize blood pressure and ease anxiety.

The main focus of Ananda, which towers some 1,000 feet above sea level, is yoga, meditation and ayurvedic treatments, though there are plenty of Western-style beauty treatments, exercise classes and trekking.

The senior yoga instructor, Vinay Menon, met me at a white marble music pavilion, built in 1885, its columns topped by a ceiling painted royal blue and laced with metallic-gold leafing, surrounded by a reflecting pool and lush landscaping. The beauty is almost distracting.

"The mind is like a monkey, jumping from tree to tree," said Menon, as we sat in the classic lotus position and he attempted to get me to ignore the real monkeys bathing in the pool filled with lilies. "You have to rope it in and push away distractions."

Ananda's instructors practice Hatha yoga, a combination of mind and body exercises some 5,000 years old. The yogis believed that to attain nirvana, a state of spiritual bliss, the body must first be dominated and controlled. They developed stretching, posture and breathing exercises to prepare the body for meditation. The better one is at yoga, the more deeply one can meditate.

Depending on which package you pay for, you can get private lessons or join complimentary hourlong classes in the morning with other guests.

I found Menon's 90-minute sessions to be physically challenging, but not so strenuous that I was in pain the next day. His singsong "expand the body, expand the mind" was a bit irritating — but by the fifth session I found myself actually drifting into minutes of pure meditation even as my stubby legs were struggling.

Menon also persuaded me to try a yoga remedy for sinus relief that I had resisted as just too disgusting. The altitude and pollen from the more than 50 species of trees that dot the 100 acres of Ananda had given me a monster sinus headache and puffy, itchy eyes.

Yogis believe — and rightly so, I can now attest — that daily cleaning of the nasal passages with warm salt water prevents sinus infections, colds and allergies. Pouring the salted water from a little, long-nosed pot into one nostril and letting it drip out the other also helps one prepare for yoga and meditation.

I woke up the next morning with a clear head and bright eyes. The better to read the healthy spa menu of Ananda's treetop restaurant, which serves trendy continental and Indian dishes that are all natural and low in fat. Even the yummy Kahlua mousse, made with soya cream, only had 169 calories and 11 grams of fat.

No trip to Rishikesh would be complete without attending evening prayers along the banks of "Mother Ganga," a Beatles-style magical mystery tour led from East to West by a hometown boy, guru Maharishi Mahesh Yogi.

One evening I visited Parmarth Niketan, where guru Swami Chidanand Saraswatiji presides over the dozens of young boys, many of them orphans, who live at the ashram. Dressed in bright saffron robes, their foreheads smeared with ash from a sacred fire alongside the rushing river — in which a huge, gaudy statue of a blue Krishna sits — the boys take part in a mad mix of holy roller Hare Krishna chants and choking incense that's heavy on humor and joyful inclusion.

It was the highlight of my trip. I have covered ugly fundamentalist clashes, most memorably the anti-Muslim riots in western Gujarat state two years ago, in which more than 1,000 people died, most of them Muslim and many of them children burned alive by Hindu mobs. But this was an affirmation of the tolerance that I knew in my heart is the norm for Mahatma Gandhi's India.

"Hindus by nature are very inclusive, they embrace everybody," swami Chidanand told me later, having been summoned to the ashram for a cross-legged chat. "By nature, Hindus are a very peace-loving people."

The managing director of Ananda, Ashok Khanna, had invited me to pray with him at the ashram the night before. The businessman and the guru are working together to rejuvenate the spiritual tourism that once made Rishikesh a top destination among seekers.

"Look at the beauty and dignity of this divine place, a place for healing," said swami Chidanand, who every night invites foreigners — from blond backpackers in Birkenstocks to the Bollywood and Hollywood glitterati — for dinner at the ashram.

"At the spa, you can feel someone touching your back, massaging your body. Here, it's a touch you can't see, but you are also being healed," he said.

This story has been posted in the following forums: : Headlines; COS - Congo Kinshasa; Journalism; COS - India; Meditation