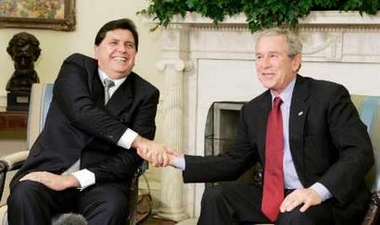 WASHINGTON (Reuters) -
President Bush met with Peruvian President Alan Garcia on Tuesday and said he would push for congressional approval of a free trade pact between the two countries as soon as possible.

"The central issue facing us right now is approval of the free trade agreement. I assured the president I would work with Congress as soon as possible to get the agreement passed," Bush told reporters in the White House's Oval Office.

Garcia, making his first official visit to the White House since becoming president in July, has embraced the free trade agreement after criticizing it during his election campaign.

Peru's legislature has already approved the agreement, but U.S. congressional leaders delayed a vote on the pact until after the November 7 congressional elections at the earliest.

Many Democrats are angry the Bush administration did not include stronger labor provisions in the pact, and some textile state Republicans are concerned domestic producers could be hurt by the agreement.

Bush told reporters he greeted Garcia as a friend and hoped their two countries could work together to promote democracy in the region and fight illegal drugs.

"I am very happy to be here for the first time in the Oval Office. President Bush and I have agreed on the general topics that we discussed in terms of strengthening democracy and also strengthening relations between developed countries and developing countries. And one basic tool for that goal is free trade. And we are very satisfied to have heard President Bush's promise to work with the Congress to push forward the passage of a free trade agreement with Peru."

We talked about world issues, we talked about issues regarding South America and Central America, and we talked about our bilateral relations. The central issue facing us right now is the passage of a free trade agreement. I assured the President that I will work with Congress as soon as possible to get this agreement passed. We talked about the need for both countries to work closely to fight drugs. And I appreciated the President's attitude and understanding of this important issue.

And we talked about the need to work together to help promote social justice. The President has a big heart. He cares deeply about those who suffer. And I assured the President it's in our nation's interest that we work with our friends in the -- in South America to promote good education and good health care and good opportunities.

All in all, it was an excellent meeting. And, Mr. President, welcome.

PRESIDENT GARCIA: (As translated.) Thank you. I am very happy to be here for the first time in the Oval Office. President Bush and I have agreed on the general topics that we discussed in terms of strengthening democracy and also strengthening relations between developed countries and developing countries. And one basic tool for that goal is free trade. And we are very satisfied to have heard President Bush's promise to work with the Congress to push forward the passage of a free trade agreement with Peru.

And we have explained today that in terms of free trade, we are looking for an agreement that does much as focus on the most modern or the most significant economic groups in the country. We are also looking to have a free trade agreement that is focused internally, and that will benefit our entire population, all our productive sectors, including the less advantaged sectors so that they may export to the world and to the United States, in particular.

We see the free trade agreement as one of our tools in our fight against poverty, and also a tool for us to strengthen equality. Also, however, it is a tool that will help us achieve security through democracy, and to give our population a road, a goal, and an aspiration in terms of economic development in the country.

We see our role as a country in terms of helping strengthen democracy and achieving friendship without threat in our region. And in this regard, Peru will continue to work towards the democratization of Latin America. As I said, it's a comprehensive democratization that we are looking for. We are looking to strengthen the options that our populations have in participating in the benefits of modernization and democratic civilization everywhere in the continent.

And one issue that we need to work on is a full eradication of the threat of drugs. And this is a commitment that we share with the United States. It's a commitment that will be strengthened and revised. And at some point, we will propose a high-level meeting on this topic in order to relaunch the fight against drugs, in terms of offering other alternatives, such as alternative development, and the free trade agreement is one of these tools. And the goal is to allow the poorest sectors, the farmers in the Andes to have access to the buying power of the U.S. market and other markets in the world.

In the relationship between the United States and Latin America, there have been several missed opportunities in the 20th century. There was an opportunity that was put forward by President Roosevelt in the '40s, with his proposal. There was also the Alliance for Progress, proposed here by the United States by President Kennedy. And now we have a third possibility involving increasing world trade and the use of free trade as a tool to fight poverty. And it is an opportunity that Latin American countries must take advantage of this time. What could have been done almost 50 years ago with the Alliance for Progress is something that we can do now, thanks to the technological and computer revolution that we are experiencing. And this is a way also to reach the poor in our countries and give them access to the world market.

And finally, I want to say that I'm a leader who belongs to a party that is the populist party, that believes in social justice and fights for sovereignty in our country. However, I recognize the opportunities that this time offers us in terms of our economy, and I believe it is important for our peoples to have specific and concrete gains in terms of the economy, education, and health. And I believe that this free trade agreement that we have been referring to is a very important tool in its regard.

And we have told the President that even though we are coming from a more modest position, we believe that with our leadership we can stand side-by-side with the U.S. and make contributions in order to strengthen democracy and peace in the world and social justice among nations and also within our societies.

And I want to thank the President for his hospitality. I look forward to continuing to work together and I hope that we will see the President soon in Peru. And thanks again for your invitation. Thank you a lot, Mr. President. Thank you very much.

This story has been posted in the following forums: : Headlines; COS - Peru; Free Trade; Politics