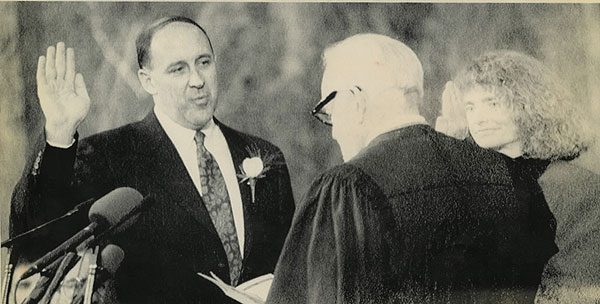 Doyle won the primary, cruised to the November win and in January walked into the office with less experience than many of the 25 lawyers on staff. On the day he was sworn in, a cold day after a far-below-zero night, veteran assistant district attorney Jack Daley came in with an empty booking sheet and declared: "They're afraid of you. Nobody was arrested last night." Wisconsin Governor Jim Doyle and his wife served as Peace Corps Volunteers in Tunisia in the 1960's.

A start in politics, and time for family

Caption: Jim Doyle takes the oath of office as state attorney general in January 1991. It was a return to politics after taking time away for family.

Jim and Jessica Doyle sat in their car outside the church dinner, the first stop on his first campaign, unsure what to do when they went inside, or if Jim even wanted to go inside.

Although he grew up in a family infused with politics, being a candidate was something new. At age 30, Jim had declared himself a candidate for Dane County district attorney, a post already held by a Democrat.

It was a brash move.

Now, Doyle was apprehensive: What would he say when he got inside to shake hands? How would the people react? Did they want to be bothered?

Of course, he went inside.

If Doyle was going to win, and he wanted to win, he had to do it, had to go through all the prescribed steps which, at this level especially, meant doing the chicken dinner circuit.

It was 1976 and Doyle had recently returned to Madison with his wife and young son. Doyle, who had hung up a shingle with another attorney, was part of a group of young lawyers in town, an idealistic bunch eager to make a difference.

"They kind of egged me on to do it," Doyle said.

To be sure, Jim Doyle was no ordinary candidate.

His father, Jim Doyle Sr., was a federal judge whose rulings, such as declaring a high school's ban on long hair unconstitutional, drew headlines. His mother, Ruth, was an official at the University of Wisconsin Law School, the latest in a series of high-profile jobs.

The incumbent was Humphrey Lynch, 48. A nice guy, sure. Doyle just thought he could do a better job.

Doyle won the primary, cruised to the November win and in January walked into the office with less experience than many of the 25 lawyers on staff.

On the day he was sworn in, a cold day after a far-below-zero night, veteran assistant district attorney Jack Daley came in with an empty booking sheet and declared: "They're afraid of you. Nobody was arrested last night."

Of course, the cases came. Every day, a new set of robberies and rapes and assaults landed on his desk. And every day, detectives, witnesses, victims and attorneys filled his office, all waiting for decisions.

It wasn't like at the Capitol down the street, where issues were chewed over and debated. Doyle quickly learned the decisions came with consequences.

"I'm the DA," Doyle said. "The police are sitting there, people need to have an answer."

Once in office, Doyle mandated there would be no more plea bargains in drunken-driving cases. It was a campaign pledge, and he meant to keep it.

There was push-back, worries that the additional trials would clog the court system. Instead, many of the defendants started to plead guilty to the original charge.

He made other changes, ones focused on supporting victims and making it easier to prosecute domestic battery and sexual assault cases.

On the job, Doyle was known for giving his assistants room to operate on their own - but solid advice when they needed it.

For instance, Steve Bablitch remembers the time a woman backed out of wanting to press assault charges against her boyfriend, but Doyle urged Bablitch to go ahead with the case. He won.

"It's a good example of the mentoring I got from him: Don't take the easy way out," said Bablitch, now Doyle's secretary of administration. "We had a discussion; he said: 'You can do it. Now go do it.' "

Doyle also was known as an ethical straight arrow.

When the family of a girl who had been kidnapped and killed sent a sheet cake to the office after the guilty verdict, Doyle insisted it be sent back. Others said that would be hurtful to the family. So the cake was put in the reception area instead - and if anyone ate a piece, Doyle didn't want to know about it.
Growing family

In 1982, after six years in office, Doyle decided to trade in the job for family time.

He and his wife had adopted another son, Gabe, whose first stop after being picked up was not home but the district attorney's office.

Jim and Jessica Doyle discuss the adoptions with a bit of a shrug: They were not making a statement. With Gus, they simply checked "no preference" in the box for the child's race. With Gabe, they figured they were well-equipped, already being a mixed-race family.

Mostly, though, the time out of the spotlight, with Doyle in private practice, was one of Little League games, basketball in the driveway, homework, chores and plain old growing up.

In 1990, the return to politics came as suddenly as the departure. As Dane County district attorney, Doyle had looked at the job of attorney general and felt he simply could do it better.

But Democrat Bronson LaFollette had a political name even more famous than Doyle. Then, the unthinkable happened: In 1986, LaFollette lost.

It was the year Republican Tommy G. Thompson swept into the governor's office and Don Hanaway won the attorney general spot.

With friend Andy Cohn as his driver and campaign manager, Doyle got back on the circuit: Chicken dinners, fish fries, festivals, parades. They traveled the state in the family minivan.

Doyle was facing state Sen. Bill Te Winkle of Sheboygan in the primary, who had locked up the endorsement of the most state lawmakers. But even eight years out of office, Doyle was better known among Democrats - sort of.

Said Cohn, "It seemed to me at the time, anyone over 60 not only knew of his father, but thought he was his father."

The elder Doyle had died three years earlier, after serving 15 years on the bench.

Once he settled into the new job, it wasn't long before he looked up the ladder and saw another one he could do.