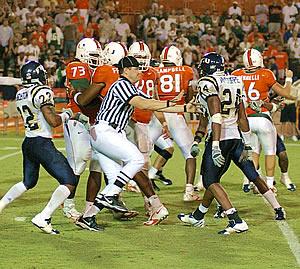 "Oh, how the brawling and fighting and kicking and head splitting and stomping and helmet swinging and cussing evinced in that awful Miami game must have galled the sainted apostle of political correctness herself -- the president of the University of Miami, Ms. Donna Shalala and her preening toadies. The brouhaha reached a crescendo loud enough so that even she finally knew that she had to act. But her response had to be meaningful, but not too harsh; smart, but not too officious; nifty, but not overbearing. " University of Miami President and former Clinton Cabinet member Donna Shalala served as a Peace Corps Volunteer in Iran in the 1960's.

The temptation of Donna Shalala

Caption: Saturday's brawl resulted in the suspension of 31 players from Miami and FIU. Photo: Chris Cutro for the Miami Herald

I got a chance to watch the long repellant version of the now and forever YouTube classic turf brawl of that long day's journey into the riot of a football game between the University of Miami and the Florida International University.

The former appears to be made up of cutthroats and brawlers assembled under the moniker of the Hurricanes, while the fist swinging boyos from the FIU go by the exalted name of the Golden Panthers, although both teams looked like they were really named Bloods and Crips, as they swung their helmets and stomped those on the ground with the all verve and gusto of Roman gladiators in a Spartacus punch up.

Sadly, such was their sterling play, sportsmanship, and offense, that I caught a wag on television attach this small joke to their tattered field of broken dreams...

Q: Who has the only car you'll find the quarterback, the middle linebacker, and the halfback in?

There was obviously no coach to be found on the field of the caliber of Vince Lombardi, Ara Parseghian, or Knute Rockne, either. The days of any kind of bench discipline are long over.

After all, in today's world, when a two football teams decide to smash each other to pieces outside the bounds of acceptable behavior, way beyond those tidy rules found in that little book in the field judges back pocket, who dares say stop? Nobody in our politically correct world. My land, that would mean that the people in charge, the, gasp, power elite, who are paid to make these critical decisions and perform those dainty interventions for the safety of others, would have to perform one and decide to end those violent madmen's "sporting" careers and send them back to the dreaded streets and those relaxing games of hop-scotch.

Back to the block where those better trained to handle their wilding - like the Los Angeles Sheriff's Department with their flak vests, semi-automatic side arms, stun guns, armored personnel vehicles, air assets, and SWAT teams - can take over their future academic requirements rather than those doting simpletons on the athletic staff, the sots in the classrooms, and in the quailing misfits in the assorted ivory towers.

Oh, how the brawling and fighting and kicking and head splitting and stomping and helmet swinging and cussing evinced in that awful Miami game must have galled the sainted apostle of political correctness herself -- the president of the University of Miami, Ms. Donna Shalala and her preening toadies.

The brouhaha reached a crescendo loud enough so that even she finally knew that she had to act. But her response had to be meaningful, but not too harsh; smart, but not too officious; nifty, but not overbearing.

To be viewed as the reigning politically correct goddess, Ms. Shalala must be seen to be working within the system to be effective. And yet, toward the minority players seen so vividly and clearly in the lens of television and public opinion who were seen smashing each other to pieces -- she must do absolutely nothing at all of any note whatsoever. But she must be seen to be rock solid about her intransigent insouciance.

You know, this rapacious behavior must have created quite a temptation for Donna. Could she have wanted to holler for a meaningful form of discipline for boys gone wild just once before falling back into the stock and trade PC response of the do nothing albeit glib administrator?

Though she was at the game, President Donna Shalala made this astounding statement to the press in her Tuesday press conference, "I actually didn't look at the tape on purpose."

She also explained that, "What I will not do is I will not crucify these young people. I will hit them hard but I am also going to reach out and pick them up."

Ms. Shalala went over the need for disciplining the players by saying, "We're not going to end their lives or end their careers or end their educational experiences here at the University."

She defended them. And talk about mixed messages.

In essence, she will do nothing to separate them from the University of Miami. The coaches, who totally lost control of their players, will suffer no consequences. And that said the money will flow in the athletic coffers.

And don't you worry about the NCAA doing a single thing in this regard, either. These zealously ruling fops and dunces are far too busy on their own witch hunt rooting out teams who have dared to use "Indian" names in their athletic logos. You won't get an pointy nosed NCAA nabob to pull his head out of a conference spread sheet to look at a full fledged collegiate riot film because that's dangerous work and far too bothersome than dangling a small school on a spit over a roaring bonfire and demanding a mascot's name change because the Santa Ana winds of political correctness demand it.

The players are laughing up their sleeve at the lack of consequences for their brown shirt behavior. And the University of Miami will graduate another batch of thug nation members, who have learned no lessons save that they can get away with anything if it's big enough, large enough, broadcast enough, and will cost enough to discipline.

And the riot torn turf is quiet until the next time.

This story has been posted in the following forums: : Headlines; Figures; COS - Iran; University Administration; Sports; Football