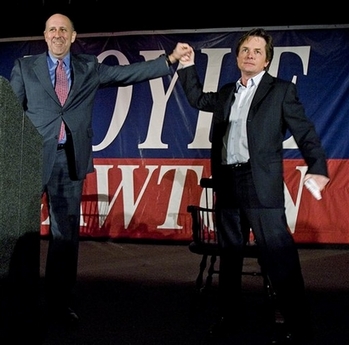 Fox campaigns with Doyle in Milwaukee

Fox, who has Parkinson's disease, has appeared in ads for the Democratic governor and other candidates who support the research as holding potential cures to his and other illnesses.

He spoke to about 300 people at the Serb Hall.

Fox, who was twitching during his speech, told the crowd he recently had a run-in with a not-so-compassionate conservative who thinks he should wait until his symptoms go away before talking to them.

Fox isn't the only Hollywood celebrity helping Doyle, Planned Parenthood says actress Kathleen Turner, an activist in the group, has recorded a personal message that'll go to about 50,000 households before tomorrow's election.

Her call urges voters to go to the polls and support Democratic Governor Jim Doyle.

Green said after stopping at Fox Valley Lutheran High School in Appleton today that those votes were against human cloning.

He told customers at an Oshkosh diner that, just as they are, he's getting tired of negative campaign ads.

But he told those at Mike's Diner as he began campaigning on the day before the election that it's almost over.

Green says that, if he's elected, he'll work to improve the economy and protect what he calls the Wisconsin way of life. He says that includes faith, family and devotion to the outdoors.

The GOP candidate for the state's top office says its important for people to get out and vote.

(Copyright 2006 by The Associated Press. All Rights Reserved.)

This story has been posted in the following forums: : Headlines; Figures; COS - Tunisia; Politics; State Government; Stem cell research