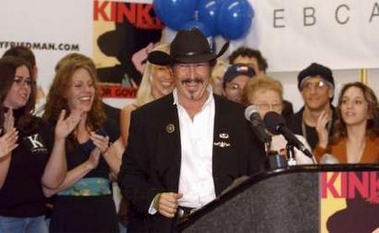 "We took on three very polished professional political machines, two of which had unlimited funds, started out as gypsies on a pirate ship and made a very noble campaign of this," Friedman, wearing his usual black cowboy hat, long black western coat and holding his ever-present cigar, told cheering supporters at Scholz Garten, an Austin beer hall. Author, Musician, and candidate for Governor of Texas, Kinky Friedman served as a Peace Corps Volunteer in Malaysia in the 1960's.

The author and entertainer, who brushed aside political correctness and hoped to repeat Jesse Ventura's surprise Minnesota miracle eight years ago, failed in his quixotic bid to become the first independent governor of Texas since Sam Houston in 1859.

Friedman was a weak fourth, trailing winning Republican Gov. Rick Perry by nearly a 4-1 margin, and behind Democrat Chris Bell and Carole Keeton Strayhorn, the state comptroller who was elected as a Republican but ran for governor as in independent.

"We took on three very polished professional political machines, two of which had unlimited funds, started out as gypsies on a pirate ship and made a very noble campaign of this," Friedman, wearing his usual black cowboy hat, long black western coat and holding his ever-present cigar, told cheering supporters at Scholz Garten, an Austin beer hall.

But he said his campaign "may be very significant in a thing we call the future."

But Friedman, who wrote books like "Kill Two Birds and Get Stoned" and songs like "They Ain't Makin' Jews Like Jesus Anymore," couldn't overcome the financial and logistical clout of the two major parties, which he compared to the Crips and Bloods street gangs.

"When these machines crank up, it's very hard to stop," he said of the established parties. "We gave Texas a choice, and it appears she really didn't embrace it."

To even get on the ballot, Friedman had two months this year to collect signatures of at least 45,540 voters who did not vote in the March primary, although he turned in nearly four times that number.

To raise money, he sold T-shirts and gimme caps, a foot-tall Kinky Friedman talking action figure and bumper stickers touting "Kinky for Governor, Why the Hell Not."

Friedman had hoped Tuesday to make it a long night for Perry, hoping pre-election polls that showed him far behind were wrong.

And Friedman, who repeatedly declared he was capable to be governor because, "How hard can it be?" found getting the job was very hard.

"He is so uniquely Texan," said Thomas Myers, a Baylor University political scientist whose interests include Texas state government. "I thought his campaign might catch on like Ventura's did. He had some good slogans, but I don't think the average voter in Texas really considered him to be a serious contender.

"He depended on one-liners, and one-liners gets you a certain amount of attention but no more. A large number of people felt: I don't know what he's going to do."

As the campaign heated, Friedman stumbled, drawing criticism for referring to Katrina refugees in Houston, the majority of them black, as "crackheads and thugs" responsible for a jump in crime in the state's largest city. His attitude toward race took another hit when audiotapes surfaced from a more than two-decade-old comedy bit in which he made racially charged remarks. Friedman explained it as satire, but civil rights leaders and others were offended.

Then in early October in the only televised debate involving all four major candidates, his one-liners fell flat, and poll numbers that had him close to Bell and within shouting distance of Perry, began to slip.

"He looked like a fish out of water and began to collapse from there," said Cal Jillson, a Southern Methodist University political science professor who's written extensively about third-party politics. "While he interested, intrigued and entertained a lot of voters, those voters expected him to make a transition from comedian to real politician, someone they could trust to be governor of Texas, and know enough to fill that position. And he never did that."

So like the defenders at the Alamo, where Friedman announced his independent bid 21 months ago, he lost.

This was not Friedman's first try at political office. Twenty years ago, he was defeated in a bid for justice of the peace in Kerrville, not far from his ranch where he's organized a rescue group for animals and where his parents for years ran a summer camp for kids.

"He has made this election, this governor's race, the most enjoyable, the most unpredictable," said Jon Taylor, chairman of the political science department at Houston's University of St. Thomas. "He made it fun."

This story has been posted in the following forums: : Headlines; Figures; COS - Malaysia; Writing - Malaysia; Humor; Election2006 - Friedman