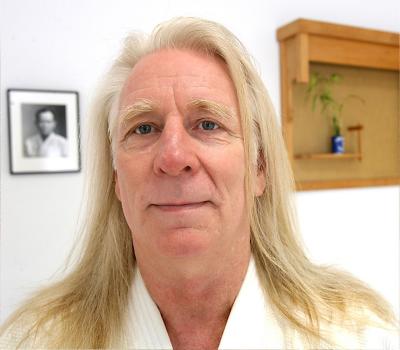 "I'm a nonviolent kind of guy," Birdsong said, explaining his initial attraction to aikido. "I'd been to India for the Peace Corps, and I was practicing yoga at the time . . . Then I met my aikido teacher, Akira Takei. As they say, the teacher arrives when the student is ready."

In Austin, there's no shortage of places to get your kicks

Caption: 'The key to aikido lies in the balancing of internal and external energies,' says Josef Birdsong, who launched the aikido program at Austin Community College in 1986.

Remember the 1970s "golden era" of martial arts in America, when everybody was kung fu fighting and Chuck Norris was an upstart, albeit one with a mean roundhouse kick?

If you're of a certain age, grasshopper, you'll recall those freeze-frame, flashback days, when David Carradine and Bruce Lee unfurled their heroic maneuvers across TV and cinema screens.

In his crisp black hakama (skirt) and silver ponytail, Josef Birdsong has the aura of a Japanese sage. The 61-year-old, who is actually Irish and American Indian, possesses the serenity of someone who might have retreated to a high mountain hermitage at some point in his life. Birdsong oozes aikido — the Japanese term for "the way of unity with the life force."

As you'd expect from such a description, this martial art is a study in harmony, a nonviolent and deflective style practiced by the thoughtful "warrior," mostly in self-defense. "The key to aikido," said Birdsong, a Sacramento native and former Peace Corps volunteer, "lies in the balancing of internal and external energies," tapping into one's own core nature while using the force of the attacker to neutralize him.

For these reasons, some argue that aikido is not a "true" martial art — not a warring art, but a healing one. Birdsong would beg to differ. A fifth-degree black belt who has been teaching aikido for half his life (he launched the aikido program at Austin Community College in 1986, after teaching a similar program at the University of Illinois), Birdsong said that by using rolls, blocks, joint-locks and other nonaggressive moves, aikido's mission is to stop violence, not further it.

"Fighting is not the point," he said.

The system incorporates traditional Japanese fighting styles such as judo and jujitsu, but it was created by a self-proclaimed peace-seeker in the early 1900s, Morihei Ueshiba. The great-grandson of a samurai warrior, Ueshiba trained in the classic arts before developing his meditative hybrid and opening a dojo, or place of learning, in Tokyo before World War II. The structure remains, and today houses the World Aikido Headquarters. Birdsong has visited three times. His own dojo, Aikido of Austin, has been around in some form since 1985, when his organization was accepted into the U.S. Aikido Federation. The current studio is airy, welcoming in its quietude.

"I'm a nonviolent kind of guy," Birdsong said, explaining his initial attraction to aikido. "I'd been to India for the Peace Corps, and I was practicing yoga at the time . . . Then I met my aikido teacher, Akira Takei. As they say, the teacher arrives when the student is ready." Later, Birdsong received a master's degree in physical education, but instead of taking a more conventional teaching path, he followed his aikido calling. In 30-odd years of instructing, he estimates he's taught more than 10,000 students.

This story has been posted in the following forums: : Headlines; COS - India; Aikido