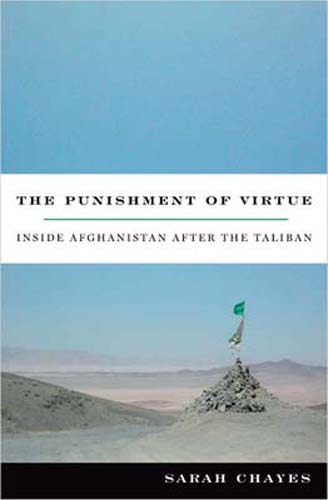 "Part memoir, part history lesson, part case study and part diatribe, The Punishment of Virtue is most compelling and original when Chayes chronicles her frustrations and modest successes in Afghanistan's Pashtun heartland. This is a passionate and emotional book, and that is its strength and its weakness. Chayes' empathy for Afghanistan is palpable and fuels an apparently heartfelt concern for the country's future (which she believes holds the key to the world's post-Sept. 11 future as well)." Morocco RPCV Sarah Chayes has made a home in Kandahar, Afghanistan, became fluent in Pashto, one of the main Afghan languages, and devoted her energies to rebuilding a country gutted by two decades of war

>>> The Punishment of Virtue: Inside Afghanistan After the Taliban
By Sarah Chayes
Advertisement
Click here to find out more!
Penguin / 386 pages / $25.95

Afghanistan is sometimes referred to as the forgotten war. Once the linchpin of America's war on terror, which hinged on toppling the Taliban regime and hunting down Osama bin Laden, Afghanistan has been eclipsed by the bloodshed in Iraq. Five years after the Taliban collapsed, the country is struggling to cope with lawlessness, corruption, a roaring illicit drug trade and attacks by insurgents determined to drive out foreign troops. Indeed, this year has been the bloodiest since the Taliban fell in 2001.

Afghanistan deserves our attention. So The Punishment of Virtue: Inside Afghanistan After the Taliban, by Sarah Chayes, is a welcome addition to the short shelf of contemporary books about this devastated land. Chayes, a disenchanted NPR reporter-turned-aid worker, has lived in the southern Afghan city of Kandahar, the Taliban's former stronghold, on and off since 2002. She offers a vivid account of life there after the Sept. 11 attacks and presents a harsh critique of "slipshod and haphazard" U.S. involvement in the region.

Chayes is horrified by the missteps she sees being taken in Afghanistan, particularly the U.S.-backed government's favoritism toward the same local warlords who terrorized and plundered the country in the early 1990s and America's "suicidally contradictory" support of neighboring Pakistan, which she says reduces the war on terrorism to "a charade."

Part memoir, part history lesson, part case study and part diatribe, The Punishment of Virtue is most compelling and original when Chayes chronicles her frustrations and modest successes in Afghanistan's Pashtun heartland. This is a passionate and emotional book, and that is its strength and its weakness. Chayes' empathy for Afghanistan is palpable and fuels an apparently heartfelt concern for the country's future (which she believes holds the key to the world's post-Sept. 11 future as well).

But that same empathy sometimes overwhelms her analysis, which is based less on verifiable fact than on the opinions and hearsay of a few people she trusts and, by her own admission, on her gut feelings, which she refers to as her "tuning fork." In particular, she echoes the belief of many Afghans that Pakistani meddling is responsible for most of the country's ills.

Presumably because of her initial close ties to the family of Afghan President Hamid Karzai (his brother Qayum was her boss at a nongovernmental aid organization until she left to start a farming cooperative), she enjoys extraordinary access to high-ranking Afghan officials and U.S. diplomats. She uses this access to try to influence the direction of the Afghan government and U.S. policy, sending memos about the pitfalls of U.S.-Pakistani relations and "how to fire a warlord." In one angry confrontation, Kandahar's warlord-governor asks her, "Are you doing aid work or politics?" When it comes down to it, she's not sure. The two, for her, are intertwined.

What Chayes does feel sure of is that Afghanistan is headed precipitously down the wrong path, and almost all the Afghan officials she encounters infuriate and disappoint her with their incompetence, corruption and weakness. She feels particularly let down by Hamid Karzai. In the heady days after the fall of the Taliban, she reveres him as "the most inspiring political leader I had come close to in my adult life." But she becomes disillusioned after he ignores her memo on protecting ordinary people from the warlords: "He was becoming a distant figurehead incapable or unwilling to weigh in on the level that counted for ordinary people."

The only one who never lets her down is Kandahar Police Chief Muhammad Akram Khakrezwal, whom she praises as "the most sophisticated political thinker I encountered in Afghanistan." The book opens with his funeral, after he is killed in an explosion at a Kandahar mosque that her tuning fork tells her "was a Pakistani job." "It fit the pattern," she concludes.

Chayes devotes too many chapters to a recitation of centuries of Afghan and Islamic history. A few unfortunate errors of more recent fact (for example, misstatements of the year bin Laden arrived in Afghanistan, and the reasons for his going there) shed some doubt on the credibility of her historical account.

Many of the details of Chayes' aid work - her reason for settling in Afghanistan - are surprisingly glossed over, aside from a couple of chapters devoted to her success in rebuilding houses in a village near the Kandahar airport devastated by U.S. attacks on the Taliban. This is one of the most compelling parts of her book, a telling microcosm of the challenges of reconstruction work, fighting the corruption of provincial officials, miscommunication with U.S. forces and even the obstinacy of the homeless residents themselves. Ultimately, she writes, "the story wound its tortuous way to a happy ending."

Given the way things are going, it's hard to imagine the same will be true for Afghanistan.

Hannah Bloch was the Time magazine correspondent in Pakistan and Afghanistan from 1996 to 2002. She wrote this review for the Chicago Tribune.

This story has been posted in the following forums: : Headlines; COS - Morocco; COS - Afghanistan; Journalism