Peace Corps Volunteer Kevin writes: We just had one awful night in Bangkok 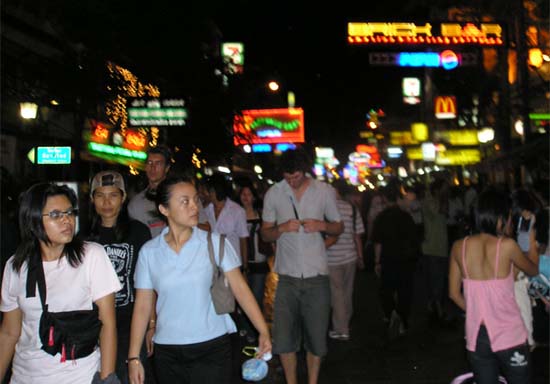 "We were in town for our group's Mid-Service Conference. One night I was on Kao San Road with my friends Chris and Dave. The bars all close at 1 am. But, there's a place nearby where they lay down mats on the sidewalk and sell drinks out of a truck. I'd been there before. It's a chill spot to drink with falangs and Thais, or so I thought. Also, it's after-hours and, I guess, illegal, so someone's paying off the cops to be there."

Peace Corps Volunteer Kevin writes: We just had one awful night in Bangkok

Warning! Today's blog is not for the squeamish!
Hello out there!

There's quite a bit to report this time. First of all, a scary story. Don't worry though, everyone's all right. We just had one awful night in Bangkok.

We were in town for our group's Mid-Service Conference. One night I was on Kao San Road with my friends Chris and Dave. The bars all close at 1 am. But, there's a place nearby where they lay down mats on the sidewalk and sell drinks out of a truck. I'd been there before. It's a chill spot to drink with falangs and Thais, or so I thought. Also, it's after-hours and, I guess, illegal, so someone's paying off the cops to be there.

Anyway, one Thai girl who worked there was really drunk and, for whatever reason, didn't like the three of us. I don't know what her problem was. I think she didn't like the Thai girls we were talking to or maybe she was mad that we weren't paying attention to her, who knows. Anyway, she got even drunker and started saying things in our direction. We ignored her.

It was late. There was this British dude playing the guitar. The girl came over and yelled at him to stop playing. Chis (one of the nicest, chillest guys) laughed and said, in Thai, "He's just playing for fun, we're all just having a good time, let him keep playing." She got really pissed off, some more words were said, and she kicked him in the head! (She had been standing, he had been sitting)

In Thailand, the head is sacred and the foot is considered dirty, so insult was added to injury. Chris and I stood up. We were both calm and asked "Why did she kick him in the head? What's going on?"

She ran and grabbed two of the guys who ran the place. I don't know what she told them. Maybe she told them that Chris hit her. Anyway, neither of us made any threatening or physical movements. One guy ran up and punched Chris in the face! The second guy, out of nowhere, beat him in the head with a wooden club! Chris was down on the ground, his glasses broken, his head bleeding, stunned. I helped him up and said, "We've gotta get out of here now." We both took off running in the direction of the nearest police station.

While we were running, we passed a gang of guys running in the opposite direction. They were all carrying more clubs and one had a foot-long machete! They were obviously part of the same gang and had been called in for backup.

We found some police. We explained what happened and I brought two of them back to the scene. I pointed out the girl and the two guys. The police did absolutely nothing. Welcome to the third world. They're obviously on the payroll of these guys.

The police took us and the girl back to the station. We were calm and collected. We explained that we were Volunteers here doing development work in Thailand. We said we weren't tourists and that we didn't want any trouble and had never before had any problems. We told our story over and over again. I must say though our Thai was on that night--maybe it was adrenaline, but we were almost fluent. The girl's story kept changing. Still, the police did nothing.

Finally, we called Peace Corps and our Security Officer and Program Manager arrived to help translate. They added a little weight to the situation and also added that we're US Government and connected to the Embassy. In the end, they had Chris file a police report.

While we were waiting there (for hours and hours) we saw two falang tourists come in who were bleeding. After seeing them, we realized that these cops probably see bleeding falangs come in every single day.

So, will the police do anything? No. They know who these people are. The guy runs a gang and an all-night illegal bar, also he was pointed out to the police by myself. PC could lean on the Embassy to lean on the police, but it's all doubtful.

There were a number of witnesses. The falangs all took off . Dave ran into two Thai girls when he was getting coffee next to the police station. They saw the whole thing. He asked them to come in and help but they said they were too scared of getting hurt. They also said that the girl does this sort of thing all the time.

So, nothing will come of it. Chris is all right by the way. It was really scary and we were pretty shooken up. I will never go back to Kao San and don't even want to go back to Bangkok. Thailand lost a bit of its luster that night. In the end, though, we had the rest of the week to talk about it and shake it off.

This story has been posted in the following forums: : Headlines; COS - Thailand; Safety; Police