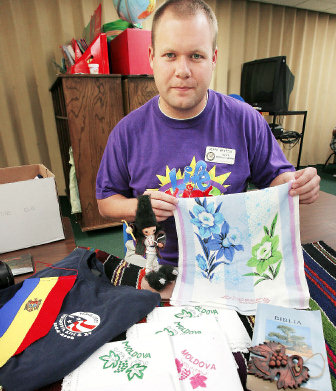 He and his fiancee, Ana Ciudnaia, plan to marry in June in the Moldovan capital of Chisinau, where she is a university senior. They plan to live in Oklahoma initially, although Melrose hopes to live abroad again in the future.

Caption: Teacher Heath Melrose, 30, shows some of his Moldovan mementos in his classroom at Northern Hills Elementary in Edmond. Photo: David McDaniel, The Oklahoman

Heath Melrose expected his two-year stint with the Peace Corps in Moldova to change his life.

But he didn't anticipate meeting his future bride during his stay in the small Eastern European country.

"It just feels perfect, but, yeah, that was my last expectation," he said. "There's a joke in the Peace Corps that there's always one in every group, and there were actually three in mine (who are marrying Moldovans). ... So I guess it's not really a joke, that it happens a lot more than I imagined."

Melrose, 30, returned from Moldova, a poor nation nestled between Ukraine and Romania, about three months ago. The Enid native, who had never been outside of the United States before, spent two years teaching English in the village school in Caplani, a tiny town near the Ukrainian border.

When he returned to Oklahoma, among his first activities were dining with family and friends, wakeboarding on the Verdigris River in Catoosa, attending services at Life Church in Edmond and eating at Ted's Cafe Escondido. He began readjusting to American life and preparing for his new job as a special education teacher at Northern Hills Elementary School in Edmond.

Establishing a stable life in his home state is a priority. He and his fiancee, Ana Ciudnaia, plan to marry in June in the Moldovan capital of Chisinau, where she is a university senior. They plan to live in Oklahoma initially, although Melrose hopes to live abroad again in the future.

"I've lived in her country and seen how they live there and how that's shaped her. ... She wants to come and live here," he said. "We're really lucky, and we're just excited about the uniqueness of it and the new experiences we'll be able to blend into our family."

In spring 2004, Melrose left his job as a special education teacher at Cleveland Bailey Elementary in Midwest City for the Peace Corps. He met his future bride shortly after he arrived in Moldova.

Ciudnaia, 23, is a Peace Corps employee who helps volunteers with documents, information and resources. She speaks several languages, including English, and lived in Virginia as a high school exchange student. Her mother also works for the Peace Corps.

Peace Corps volunteers aren't allowed to date employees, and the couple started as friends, Melrose said. In February, they started working together on an educational project for Moldovan schoolchildren. Romance bloomed, and they began discreetly dating.

"We definitely tried to be respectful of the rules, but I guess when you know, you know," he said. "She's amazing."

When his Peace Corps service ended in July, Melrose had about 10 days to openly court his fiancee, meet her parents and start wedding plans before he returned to Oklahoma.

Before his engagement, Melrose wasn't sure he would move back to his home state. He considered teaching abroad in other countries, even applying for a job through a Honduran mission.

Once the couple decided to get married, he started applying online for Oklahoma teaching jobs. His mother, Evelyn Myers of Hobart, helped him set up a June phone interview with Northern Hills Principal Nellie Sizemore.

For Sizemore, Melrose is the first hire she has made through an overseas phone interview. She said his Peace Corps service gives him an added dimension and speaks volumes about his character.

Myers said her son returned from Moldova with a more mature outlook, in addition to a fiancee.

"He seems to kind of have a peace about him that he's gone and done this, something he wanted to do ... before he started a family," she said.

She has talked to her future daughter-in-law via phone and e-mail, but they won't meet in person until the wedding. While Ciudnaia is arranging the Moldovan nuptials, Melrose and his family are planning a wedding blessing ceremony in Edmond for the couple.

"She's a very sweet girl, a very smart girl. I think he made a good choice," Myers said. "I think it's been a great experience for him."

Although his Peace Corps experience was often challenging, Melrose said it was worthwhile.

"I would definitely consider myself as changed for the better, even if I hadn't met her (Ciudnaia)," he said. "If I could do it all over, knowing what I know, I definitely would do it again."

This story has been posted in the following forums: : Headlines; COS - Moldova; Marriage; Romance