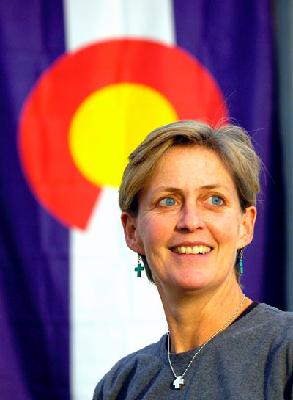 Her expertise is special-needs children, a passion that manifested years ago when she worked at a center for the disabled in Tunisia as a Peace Corps volunteer. She moved to Tunisia without Bill, during a period in their 10-year-long, on-off courtship when they were on the outs. "She's a natural extrovert," says Theresa Peña, president of the Denver Public Schools Board of Education. "Parents really want to be part of their kids' education, and she's embraced them, inviting them to be part of the larger classroom. She has a natural ability to connect with people, adults and kids." This skill will translate to her new career as first lady, which starts in January.

The next first lady

Before she has even stepped into the role of first lady, the tale of Jeannie Ritter at the Colorado Governor's Mansion is fast becoming legend.

When family and friends visited over the recent Thanksgiving holiday, everyone wanted to see the place, so they all clambered into her green van, which is itself a legend among her friends.

"She drives this big green van that's perpetually filled with children and adults," says longtime friend Shae Isaacs. "She's a collector of people. They just trail her around, like the Pied Piper."

So on that day, the petite woman with the pixie haircut pulled up to the sprawling Boettcher Mansion at 400 E. Eighth Ave.

Everyone piled out and started to skulk around, parting thickets of ivy to peek into windows, traipsing around the back of the historic home like spies in the night.

Some of the young men, on vacation after kicking it hard at the end of the Ritter campaign, sported three-day growths of beard. "We were pretty rough looking," says Jeannie to her husband, Gov.-elect Bill Ritter, who sits in the kitchen of their Platt Park home.

Suddenly, the mansion's security guard - who'd been observing their antics on his camera monitors the whole time - charged out to confront them.

Her husband, between bites of pizza and sips of beer, grinned with affection at his wife of 23 years.

"The Clampetts go to the mansion," he quipped.

They're hardly the Beverly Hillbillies of Denver. On the other hand, there is an emotional honesty about the new first lady, a candor so irrepressible that sometimes Bill Ritter's campaign spokesman, Evan Dreyer, elects to sit in on her interviews. Just in case.

"I'm the babysitter," he jokes.

During a recent Monday morning, Dreyer sat on the couch, just listening. Ritter was talking about positive changes that she's made recently in her life, the sort of things many women discover only at midlife.

"I'm just figuring that out!" she says, talking about the need for self-nurture.

"I'm not proud of that. Just now I'm 50, and I've come to understand stuff I never did before. I started yoga up at Wash Park. I can tell you that I have not taken a full breath in my whole life until I got to that yoga class. I mean, I know that about myself - moving too fast, and fragmented."

She hesitates and then forges ahead, voice strong.

"When this (campaign) process started, feelings were getting out of control," she says. "I put things in place that I'd never done before: I went to see a counselor. I'd never done that before in my life. I looked around and thought - pfft!!! These people see a counselor, I've never done that, I'm going to do that! I hired somebody to help me clean my house. That was a huge revelation, you know?"

For the past 10 years, she's been a working mom who hustled to get the four kids off to school, and then shot out the door to work as a long-term substitute teacher in the public schools of south Denver, close to their home.

She met her husband 33 years ago, when she was a cheerleader and he was a football player at Hinkley High School in Aurora.

A self-described military brat, one of four children born to a Navy recruiter and his wife, she was the first in her family to graduate from college, earning a degree in special education from the University of Northern Colorado.

"There's nothing hidden about her," Isaacs says. "What you see is what you get."

Ritter's favorite store is a thrift shop on South Pearl Street. She loves to dance with her husband - she calls him Billy - particularly country-swing dancing on the Cheyenne Frontier Days train. Her conversation is peppered with words like "fun" and "exciting."

"No one can make me laugh like she does," says her friend and neighbor Lori Willard.

She is fun-loving and spontaneous but also very stable. A devout Catholic who delights in pilgrimages to the Mother Cabrini shrine, she prizes faith and family.

Books stacked next to the fireplace include such guides to spiritual growth as "Finding Meaning in the Second Half of Life," a gift to Jeannie from one of her many friends, and "The Way of the Wild Heart: A Map for the Masculine Journey," by John Eldredge, which Bill is reading.

And recently, during some of the most frenetic days of the campaign, she read aloud to her husband from "Let Your Life Speak," by Quaker writer Parker Palmer, a book about living an authentic life.

"The political process can sometimes dilute authenticity," Bill says. "She's been very stubborn about not allowing that to happen."

Discussing their spiritual journey together, he says they've shared the leadership role: One or the other is out front, depending on their life stage. Right now, Jeannie's in the vanguard, bringing Bill along.

"The campaign was really tough," he says. "She's doing a better job at that than I am."

Family friend Isaacs first met Bill 25 years ago during Bible study at the Church of the Risen Christ, a time when Jeannie was living in Tunisia as a Peace Corps volunteer.

"They're extraordinarily well matched," she says. "At a very deep level, they're going in the same direction, very complementary and compatible."

Or, as Willard puts it: "They still really dig each other."

On the first Sunday of Advent Bill and Jeannie, with their two youngest children - Sam, 16 , and Tally, 13 - go to evening Mass at Church of the Risen Christ, where the message is new beginnings, a fitting topic for this family in transition. The Ritter nest is half-empty; the two eldest kids, August and Abraham, are now in college.

After church, they pick up dinner at Anthony's Pizza & Pasta. Jeannie gets an extra order of raw dough, which she will bake into a hot treat, layered with spinach and feta, for the kids the next day. Then they're homeward bound.

Everyone eats together at the oblong wooden table, with Jeannie popping up to brew more chamomile tea or cut slices of pizza with her kitchen scissors.

Then Sam heads to his room to do his homework, and Tally retreats to warm her back at the fireplace.

Bill's brother and nephew show up, so the guys all troop downstairs to watch the Broncos play.

Jeannie stays upstairs in the kitchen to schmooze with the Rev. John Lager, a brown-robed Capuchin friar who arrived about 8:30 p.m., invited to stop by after the Ritters ran into him at Mass.

Jeannie lights six votive candles nestled in a small muffin tin, dims the overhead light, and settles in with the friar. They trade tips on life balance and catch up on mutual friends.

The centerpiece of her red-walled kitchen is a colorful mosaic installed over the stove, something she made with pieces of broken pottery - cups, plates, teapots, a crucifix - that she'd collected over the years.

When she got revved up over this art project and felt it needed more yellow or green, she started reaching into the cupboard, and the kids found themselves reining her in: "Mom! Not that plate!"

Nearby, above the Formica countertop, there is a framed picture of the Lord's Supper with a black African Jesus and black apostles, brought back from Zambia, where she and her husband lived for three years working as lay missionaries.

For the first time in 10 years, Jeannie will not be leaving this home for her job in the public schools. "I miss the kids," she says.

She didn't teach during the campaign because of its demands but still would like to have some presence in elementary-school classrooms, though she knows first lady is a job unto itself.

Her expertise is special-needs children, a passion that manifested years ago when she worked at a center for the disabled in Tunisia as a Peace Corps volunteer. She moved to Tunisia without Bill, during a period in their 10-year-long, on-off courtship when they were on the outs.

"She's a natural extrovert," says Theresa Peña, president of the Denver Public Schools Board of Education. "Parents really want to be part of their kids' education, and she's embraced them, inviting them to be part of the larger classroom. She has a natural ability to connect with people, adults and kids."

This skill will translate to her new career as first lady, which starts in January.

Right now, she's unafraid to admit - in public - to some anxiety over how the family's new reality will affect their future.

"There are big changes ahead for us," she said during a recent television interview, "and I don't take them lightly."

One of the biggest changes, during the campaign and the transition, is the amount of time her husband is able to spend with the family.

"I don't think people have forgotten, but people should be reminded," she says. "He's our favorite thing, too. He's a big piece of what goes on around here and the tone that is set."

Her trademark optimism, however, wins out.

"My hope is that it's a good thing, that as hard as everybody says it's going to be - they say, 'Don't kid yourself, your life won't be normal, don't wish for it to be normal' - but it could still be good," she says.

Sipping fresh-brewed tea, wearing jeans and a taupe sweater, she sits on her couch beneath a life-sized portrait of Our Lady of Guadalupe, the patroness of Mexico.

"We could all come away stronger and richer for it."

Staff writer Colleen O'Connor can be reached at 303-954-1083 or at coconnor@denverpost.com.

This story has been posted in the following forums: : Headlines; COS - Tunisia; State Government