Fred Poses' American Standard is to break up into three companies 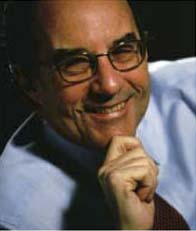 Fred Poses, American Standard chairman and chief executive, echoed the sentiment of many business leaders and investors when he said the break-up was the "best way to enhance shareholder value." Businessman Fred Poses, the President of American Standard Co., served as a Peace Corps Volunteer in Peru in the 1960's.

Fred Poses' American Standard is to break up into three companies

American Standard to break up

American Standard is to break up into three, unravelling a $10bn toilets-to-brakes group dating back to the 19th century and sounding another death knell for out-of-favour US conglomerates.

The decision by American Standard to spin off its vehicle controls business, sell its bath and kitchen products division and retain its air-conditioning division reflects growing investor dissatisfaction with sprawling groups.

The disenchantment is a rejection of the notion – popular in the 1960s and 1970s – that conglomerates' vast array of businesses offered investors protection from swings in the economic and business cycle.

The current trend in favour of more focused companies such as Google and Apple has contributed to the demise of several diversified groups and raised questions over the strategies of some of the surviving ones, such as General Electric and Citigroup.

This week Altria announced the spin off of Kraft Foods from its Philip Morris tobacco business, while scandal tainted Tyco is to break itself up into three in the next few months, mirroring moves by the property-to-travel group Cendant and the media group Viacom.

Pressure on conglomerates to break up has been intensified by the rise of private equity funds, which have often used their vast cash resources to buy divisions of large groups.

Analysts said that buyuot groups or foreign buyers, possibly from China, could bid for American Standard's bath and kitchen unit. The business has been hit by high commodity prices and unsuccessful products, but its brands are popular in Europe and America.

The vehicle controls division, called WABCO, could also be bought before the planned spinned off on the stock market, industry experts said.

Fred Poses, American Standard chairman and chief executive, echoed the sentiment of many business leaders and investors when he said the break-up was the "best way to enhance shareholder value."

Although shares in American Standard, which began as a tinware shop in Massachussets in 1872, have risen more than 35 per cent over the past year, Mr Poses said the three businesses would be better off on their own.

The surviving company is to take the name of the $6.8bn air-conditioning unit Trane. Investors reacted positively to the break up, sending American Standard shares more than 7 per cent higher in New York midday trading – the biggest gain in over six years.

This story has been posted in the following forums: : Headlines; Figures; COS - Peru; Business