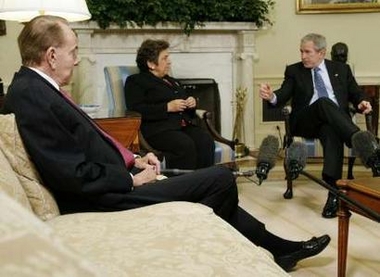 "This is going to be comprehensive; it's going to be vigorous," Shalala said as she and Dole stood outside the White House after their meeting with Bush. "And neither one of us are afraid of talking to the brass, whether it's the president of the United States or a general." University of Miami President and former Clinton Cabinet member Donna Shalala served as a Peace Corps Volunteer in Iran in the 1960's.

The co-chairmen of a new bipartisan presidential commission charged with looking into the care of wounded service members vowed today to conduct a comprehensive and vigorous investigation, possibly leading to recommendations that could change the system for decades.

Former senator Robert J. Dole, a Republican from Kansas who was seriously wounded in World War II, and former health and human services secretary Donna E. Shalala, a Democrat who served for eight years in the Clinton administration, told reporters after a meeting at the White House that President Bush wants them to look at the entire military care system following revelations of shortcomings at Walter Reed Army Medical Center.

Congressional Democratic leaders later called on Bush to include service members with experience in Iraq and Afghanistan, as well as family members, on the commission, and they said Congress should be given a role in selecting the commission members and determining their responsibilities.

Bush yesterday named Dole and Shalala to head the commission, which he formed in response to a growing outcry over the care of wounded outpatient soldiers. Demands for corrective action arose among the public and in Congress after The Washington Post last month exposed squalid living conditions in a decrepit Army-owned building just outside Walter Reed and highlighted bureaucratic obstacles and delays in the outpatient treatment of soldiers who suffered serious injuries, including brain trauma, in the wars in Iraq and Afghanistan.

"This is going to be comprehensive; it's going to be vigorous," Shalala said as she and Dole stood outside the White House after their meeting with Bush. "And neither one of us are afraid of talking to the brass, whether it's the president of the United States or a general."

Bush said after the Oval Office meeting: "I am concerned that our soldiers and their families are not getting the treatment that they deserve, having volunteered to defend our country." He pledged that "any report of medical neglect will be taken seriously by this administration . . . and we will address problems quickly."

Bush said the nine-member commission "will analyze our health care both at the Defense Department and at the Veterans [Affairs] Department, to ensure that not only our soldiers but their families have got complete confidence in the government's upholding its responsibility to treat those who have been wounded."

The president expressed concern that "there may be flaws in the system" between the time a soldier is wounded and when he or she ultimately returns to the community. He said he was "confident that this commission will bring forth the truth" and that "there will be a quick response to any problems" the panel finds.

The rest of the commission members are to be named this week, the White House said yesterday.

In a letter to Bush today, Senate Majority Leader Harry M. Reid (D-Nev.) and House Speaker Nancy Pelosi (D-Calif.) welcomed the selection of Dole and Shalala as "a good first step," but they said that "more needs to be done to provide our troops and the American people confidence in the commission's work." They wrote, "First, it is essential the commission include both service members returning from Iraq or Afghanistan and their family members with a firsthand understanding of the flawed system."

In addition, they said, "we think the commission will be stronger and its conclusions will have greater credibility if members of Congress from both parties play a role in selecting the remaining members of this commission," including the veterans and family members.

Democrats drove home those points in a meeting this afternoon at the White House between Bush and a bipartisan group of lawmakers.

Sen. Richard J. Durbin (D-Ill.), the majority whip, said after the meeting that he pressed Bush on issues that are "at the heart of our situation in Iraq," asking him how much longer the war will go on and how long a current troop surge will continue "before we can make an evaluation" of its effectiveness. Ultimately, he said he told Bush, the new commission will have to make decisions "based on a projection of how many more injured soldiers we're going to be treating in the years to come."

Durbin said he also raised questions about whether a pending appropriations bill should include more money for military hospitals and the Veterans Administration.

He said it was inexcusable that wounded troops "now have to be subjected to flophouse atmospheres near Walter Reed hospital fighting the bureaucracy when they're trying to overcome their own illnesses and turning to families that have been praying for their safe return as their only advocates at the last moment."

Shalala said after meeting Bush, "The president actually asked us to look at the whole system from the time a soldier is moved from Iraq or Afghanistan into other kinds of care, and he made it very clear that if one soldier doesn't get high-quality treatment and isn't transitioned back into civilian life or back into the military, that's unacceptable."

"And you could sense his anger and his anxiousness that we move as quickly as possible while the Defense Department is moving to make corrections at Walter Reed," she said.

Dole said Bush made it clear that "he was going to be personally involved in this commission . . . and he thought if we came up with good recommendations it could change the system for the next 30 years."

Dole, 83, and Shalala, 66, said they would start by talking to military patients and their families.

Although he has been to Walter Reed often, Dole, a disabled veteran and former GOP presidential candidate, said he was unaware of the problems there and had not been to Building 18, the former hotel across from the hospital compound where Post reporters found wounded soldiers living in squalor in rooms plagued by mold, rot, mice and cockroaches.

"Obviously, somebody dropped the ball," Dole said. "I wonder where all the service organizations were."

In the years since Dole was seriously wounded while serving as a young Army officer in Italy, losing the use of his right arm, "health care has changed," Shalala said. "Now there's a tremendous outpatient piece," especially since more wounded soldiers are surviving their injuries than ever before.

"We have a war now with a significant number of lives being saved that weren't saved in previous wars," she said. "That requires a very different kind of system, and we need to get this right for everyone."

In Congress, meanwhile, lawmakers held another series of hearings today to probe the shortcomings in military care. The defense subcommittee of the Senate Appropriations Committee held a hearing on Defense Department medical programs; the Senate Veterans Affairs Committee investigated the "adjudication process" for veterans benefits; and the House Appropriations Committee's defense subcommittee called in top Army brass to ask more questions about the situation at Walter Reed.

Inouye added: "It is not just a matter of medical care. We must recognize the changing implications of our service members' surviving life-threatening injuries and the fact that many of them have the utmost desire to return to active duty."

Reports of substandard housing for some wounded soldiers at Walter Reed "have shed light on a massive failure which I believe is inexcusable on every level," said Sen. Richard C. Shelby (R-Ala.). "Yet what is perhaps more disturbing is this problem is likely not an isolated incident. . . . The problem clearly goes deep beyond the facilities at Walter Reed."

Sen. Patty Murray (D-Wash.) cited reports of maltreatment of wounded veterans in her home state and said she holds Lt. Gen. Kevin C. Kiley, the Army surgeon general and a former Walter Reed commander, "accountable for every disturbing story I'm hearing." She also demanded his personal assurance that soldiers who blow the whistle on substandard care will not face retaliation.

Kiley, appearing before the panel after having testified before other congressional committees Monday and Tuesday, reiterated his apologies for the situation at Walter Reed and said Building 18, which formerly housed nearly 80 wounded soldiers, has been emptied.

"We're taking steps to improve responsiveness of our leaders and our medical system and to enhance support services for families of our wounded warriors," he told the subcommittee. "We're taking action to put in place longer-term solutions for the very complex and bureaucratic medical evaluation process that in fact does impact on our soldiers."

Kiley also hailed the role and sacrifices of Army medics in the wars in Iraq and Afghanistan, noting that 101 of them have been killed to date. In addition, he said, "Army medics have earned over 220 awards for valor and more than 400 Purple Hearts."

This story has been posted in the following forums: : Headlines; Figures; COS - Iran; University Administration; Military