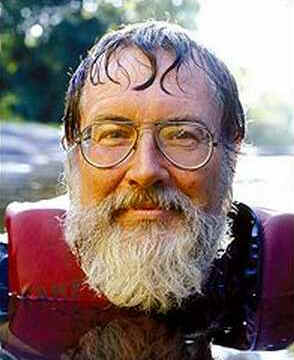 Our favorite gadget? An old-fashioned cigarette lighter given to me by a villager in Thailand, where I grew up for part of my life. It's basically a small diesel engine made out of wood.

"Candor above everything else."

In honor of Earth Day, we are rerunning our 20 Questions segment with Ralph White, a naturalist and manager of the James River Park System. The local park system hired White in January of 1980 from the National Park Service, where he worked as a park ranger, taught classes, lead nature walks and maintained and managed visitors of the park. In April 2005, White was the subject of controversy when he protested a decision made to limit the access to nearly 20 James River Park entrances. To make the statement that the parks should be freely accessible at all hours of the day, White used heavy chains and a lock to keep the gates in the open position. He was suspended for two weeks without pay for his actions. Eighteen months later, he received the Sierra Club's 2006 Distinguished Service Award.

Your favorite thing to do when not working?

I used to live in the desert, and I like the Red Rock Country in Utah, in the high desert.
A promise you've made to yourself?

The one I'm reading now, "Guns, Germs and Steel." It's about war and, more than that, it's about how societies evolve and why societies are the way they are.
The name of your first pet?

Methusala, a gold fish I had for a long time.
Have any pets now?

I'm recovering from the loss of a pet, a black lab named Draco, because we found him as a puppy abandoned on Dragon Run, down near Saluda.
Your favorite gadget?

An old-fashioned cigarette lighter given to me by a villager in Thailand, where I grew up for part of my life. It's basically a small diesel engine made out of wood.
Three favorite movies?

"Gates of Rashoman," "A Passage to India," and "Tompopo."
Favorite place to eat?

The Athens, because I can call them and the food is ready when we arrive.
What's on your nightstand?

A book by E.O. Wilson, an art magazine, a clock, a pot bellied pig, a picture of my wife and myself and a whale oil lamp.
Favorite spot in Richmond?

Pony Pasture at dawn in the fall or at dusk in the springtime or early summer on a full moon.
Three spices you can't live without?

Garlic, ginger and seasoned salt.
What do you admire most in someone else?

Honesty and simplicity.
What magazines do you read religiously?

I'm an inveterate magazine reader. The New Yorker, and Science News. We get probably 10 other magazines, but I can't wait to get those two. Also, National Fisherman.
Three things always found in your refrigerator?

Right now, I am very afraid of conflagration involving chemicals, germs and weapons of mass destruction.
What do you wish you could change about yourself?

I wish I didn't have soft nails. They keep tearing and you can't get the paint out from under them (laughs).
What's in the trunk of your car?

I have a Toyota pickup truck, and in the back is a small wad of decaying leaves and two aluminum cans on their way to be recycled.
How would you describe your dance moves?

Clunky neo-Southeast Asian. I'm not outrageously bad, but I'm not a party animal.
Your motto?

There is a family motto: Candor above everything else