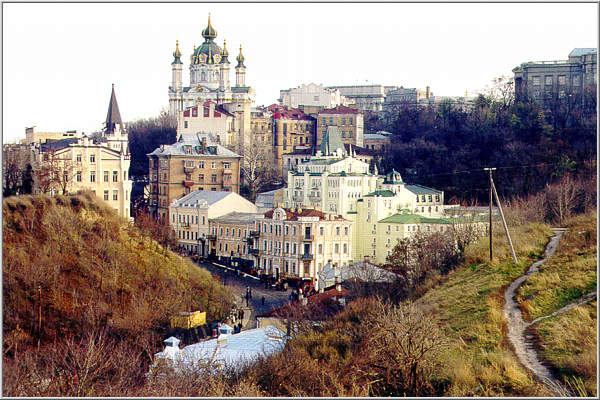 WINDSOR - Like many retired couples, Marilyn and Michael Hopper have used their new freedom to travel. But instead of cavorting on Miami Beach or driving across country in a recreational vehicle, the Hoppers have been volunteering in Albania, Russia, and the Ukraine.

They started their odyssey in 1994, with a two-year stint as Peace Corps volunteers in Albania.

"That was the first bite of the apple, and we just caught the bug, " Michael Hopper said while relaxing recently in his sun-drenched kitchen.

Next, they worked in Russian villages on the Baltic Sea and went back to Albania in 1997 to monitor elections there. They even crossed the border into Serbia for a few weeks, just before "ethnic cleansing" turned the fledgling country into a war zone.

Most recently, they returned from three weeks in Sevastopol, a Ukrainian city on the Black Sea, where they served as Citizens Democracy Corps advisors to a private English school.

Michael worked with the school's directors on the business aspects of its operation, and Marilyn worked with the teachers and students, helping them switch from teaching British English to American English.

American English, with all its idioms, "is now considered the universal language of business and the Internet," Marilyn Hopper said. "When you teach them English, you give them the key to the largest library in the world."

The Citizens Democracy Corps, much like the Peace Corps, is a nonprofit, Washington, D.C.-based organization that sends American citizens to underdeveloped countries. But while Peace Corps volunteers must commit two years of their lives to their assignments, CDC workers can expect shorter postings, averaging a month or so.

According to Jared Katz, communications officer for the CDC, volunteers are "experts in their fields, and they provide consulting to a wide variety of enterprises and business-support organizations in Russia and Eastern Europe."

It's the kind of work the Hoppers had always wanted to do but didn't have time for until recently. The dream of helping developing countries was planted early one October morning when, as students, they attended an impromptu 2 a.m. rally on the University of Michigan campus.

It was three weeks before the 1960 presidential election, and 10,000 students had gathered to hear Democratic candidate John F. Kennedy speak. For the first time, the young candidate talked extemporaneously about an idea for international service - a plan where American citizens could volunteer their time abroad to help countries that weren't as technologically advanced as the U.S.

But even as they cheered with the rest of the crowd that morning, the couple knew the timing wasn't right. They had to finish their education. After graduation, they married, started their careers, and began raising three children. The dream was put on the back burner.

But 10 years ago, it resurfaced when their son, Michael Hopper Jr., joined the Peace Corps and spent two years in the African country of Sierra Leone. Around the same time, Michael Hopper Sr. - 55 years old and working for the United Technologies Corp. - took an early retirement from his engineering job.

"UTC gave me the opportunity with the golden parachute," he said.

Marilyn, a tutor with the Windsor school system, was thrilled with the prospect.

"It really is the toughest job you'll ever love," Marilyn Hopper said, quoting the Peace Corps motto. "It's such a feeling of satisfaction because people really appreciate what you're doing."

Located on the Crimean peninsula, Sevastopol is a mariner's city, with a Navy base much like New London's, Michael said.

The Hotline English School, where the couple worked for three weeks, is a private academy where students from kindergarten to adults go to learn English. The five classrooms and one office were located in a hotel, Michael said, and it served 200 to 300 students.

The Hoppers were living at the school when the Russian submarine Kursk sank. "It was very sombre all around town," Michael said.

Marilyn nodded in agreement. "Every time you had a class, they started by discussing the latest news."

But there were happy times as well, they said, and the couple have made lifelong friends in all of their travels.

And the country was beautiful, they said, and filled with history. They visited the Crimean War battlefield made famous in the poem, "Charge of the Light Brigade," and poked around ancient Greek temples and Jewish cave dwellings.

In the palm of her hand, Marilyn displayed a small piece of tile, broken off from a mosaic at one of the Greek temples which the director of the school had given to her as a parting gift. The chipped, terra-cotta fragment is 2,500 years old, she said in a whisper.

"Windsor may be old, but we've got nothing like that here," Michael said with an appreciative grin.