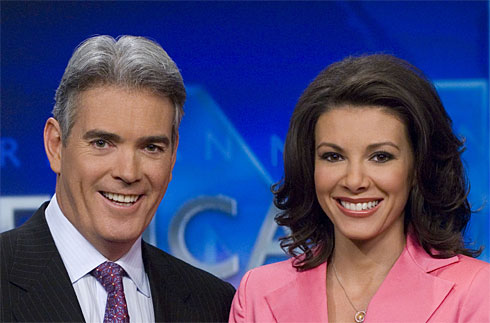 Chetry, 32, was born in Nepal, daughter of a Nepalese Peace Corps executive and an American mother, and raised in Maryland. She cut her teeth in local cable and anchored a morning show in Sacramento before moving to cover overnight news at Fox.

Kiran Chetry (born August 26, 1974 in Kathmandu, Nepal) is an anchor and correspondent for CNN.

She is best known for her work as former co-host of Fox and Friends on the Fox News Channel. Kiran (whose name is Sanskrit for "rays of sunshine") grew up in Gaithersburg, Maryland and received a bachelor of arts in broadcast journalism from the University of Maryland, College Park's College of Journalism.

Chetry began her career in 1995 at News 21 in Rockville, Maryland, then moved to WICU-TV in Erie, Pennsylvania as the main anchor and health reporter. She received the Best Enterprise Reporting award from the Pennsylvania Associated Press Broadcasters Association in 1997 for her series "Young and Hooked," which looked at teen smoking. Prior to joining Fox News, she was the morning anchor and reporter for KXTV in Sacramento, California. Chetry first appeared on Fox News March 8, 2001 in a story about eating ice cream.

She is married to former Fox News Channel weather forecaster Chris Knowles, but originally did not acknowledge it in her on-air interactions with him. In many exchanges between them, they would each talk about their spouse in the third person. Knowles did acknowledge Chetry as his wife when it was announced she was pregnant with their child, and again on a show while Chetry was still on maternity leave in which pictures of their newborn daughter, Maya Rose, were shown.

Although there had been growing rumors of Chetry being pregnant in 2005, she was no longer able to hide her growing belly girth, and she announced on the October 8, 2005, edition of Fox & Friends Weekend that she was 22 weeks pregnant and expecting a baby girl in February 2006. Her baby Maya Rose Knowles was born on February 8, 2006, at 1:18 AM.

Chetry returned to the Fox & Friends Weekend Edition program on Saturday, April 8, 2006, after taking maternity leave. During this program, she acknowledged her marriage to Knowles, and even joked that she did not bring an umbrella with her that day because "we don't discuss work at home." Since that time Chetry and Knowles have been considerably more open about their marriage.

On the April 29, 2006, edition of Fox & Friends Weekend, Chetry discussed Wikipedia with her on-air colleagues. They mentioned the John Seigenthaler, Sr. Wikipedia controversy. Chetry also read a portion of this article. She disagreed with the characterization that she had hid from the public her marriage to Knowles.

On February 15, 2007, Chetry was notified by Fox News, via letter to her agent, that her contract would not be renewed. The letter claimed she demanded "that Fox News include a clause in her new agreement that would have been detrimental to other Fox News talent".[1] Apparently, Chetry wanted a clause in her contract that would have had Gretchen Carlson, a co-anchor of Fox & Friends, fired.[2] [3] The next day Fox News informed her that they would [4] terminate her current contract [5] immediately and that she would be free to leave before the expiration of her existing contract. She exercised that right.

Chetry's agent has denied the allegation of Chetry wanting Carlson fired by stating it is "absolutely false". [6] Another source says that the clause in question was merely asking for written clarification of whether Chetry would become a "Fox & Friends" co-host and when. If that didn't happen by a certain date, then Chetry would have a window to exit her new contract. [7]

On February 16, 2007, Chetry began work as a CNN anchor and correspondent. She served as a co-host on American Morning in the morning, and then was slated to anchor Anderson Cooper 360 that evening. After CNN had locked up Chetry, the anchor had kind words towards CNN: "CNN is the gold standard when it comes to journalism, and I am thrilled to be part of the team".[8]. Reportedly, the deal between CNN and Chetry came within one hour of her release from Fox News Channel. She has occasionally replaced Erica Hill on Anderson Cooper 360 in reading the news bulletins.

On April 3, 2007, The Post Chronicle reported that Chetry would begin work as co-host on American Morning with John Roberts in two to three weeks, replacing Soledad O'Brien. [9].

At the University of Maryland, she was a member of the Alpha Pi chapter of Delta Delta Delta sorority. Distinguished Deltas

This story has been posted in the following forums: : Headlines; COS - Nepal; Journalism; Television