June Carter Perry, the ambassador designate to the Republic of Sierra Leone, strongly supports reintroduction of a Peace Corps program in Sierra Leone 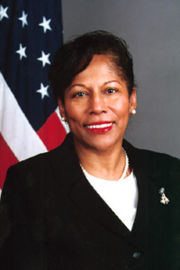 June Carter Perry, the ambassador designate to the Republic of Sierra Leone, strongly supports reintroduction of a Peace Corps program in Sierra Leone

AMB. PERRY: Thank you, Chairman Feingold and members of the committee for the opportunity to appear before you today on Juneteenth, which I think is a very important today in the history of American ethnic relations. I am honored to be President Bush's nominee as ambassador to the Republic of Sierra Leone.

I would like to thank the president and the secretary of State for once again placing their confidence in me to serve as an ambassador of the United States. I would also like to thank my distinguished husband, Mr. Frederick Perry, who is here with me today; he is a retired senior Foreign Service officer and without his unwavering support, I would not have the opportunity to be where I am at present.

If confirmed, I look forward to building on the work of my distinguished predecessor, Ambassador Thomason N. Hull III, to support Sierra Leone's heroic efforts to reconstruct society, to strengthen democracy and to promote prosperity.

Coming from the mountain kingdom of Lesotho and, if confirmed, going to the "lion mountain" of Sierra Leone, I believe I can be proactive diplomacy to advance U.S. interests as well as key development sectors as Sierra Leone approaches an important transition period.

In my 24-year Foreign Service career, I have engaged the United Nations as director of an office in international organization affairs; the World Bank; universities such as Columbia, Boston, Harvard and Howard; African governments and civil society to promote U.S. interests in Africa, including the advancement of human rights, working to ensure the effective use of U.S. HIV/AIDS assistance, quadrupling our assistance through PEPFAR in Lesotho, and fortunately, through my three years of service there, working extremely closely with our Millennium Challenge Corporation team in Washington as well as with the government of Lesotho.

I also had the opportunity to participate, as indicated, in the further development of AGOA, and certainly in Sierra Leone we look forward to promoting that even further as Sierra Leone is scheduled to chair a panel at the AGOA forum in July.

I have also had the opportunity, Mr. Chairman and members of the committee, to promote equity for women and children and to contribute to advancing civilian authority over foreign militaries, effective counternarcotic measures, results-based economic development policies, and humanitarian assistance in my previous roles not only as ambassador but as deputy chief of mission in Madagascar and as deputy chief of mission in the Central African Republic. These issues have remained key objectives during my service.

However, my most important responsibility has been the safety and security of American citizens, including the development of counterterrorism measures. If confirmed, I would bring these experiences in dealing with African development issues to enhance the already excellent relationship the United States has with Sierra Leone. If confirmed, I would also further enhance through public diplomacy our relationship. I noted that this week the reconstructed ship, the Amistad, will depart Connecticut en route to the port of Freetown. I would look forward, if confirmed, to using the arrival of that ship as a key public affairs opportunity bringing, Mr. Chairman, perhaps yourself, if confirmed, as well as members of the committee.

Reaching back to my private-sector experience with RKO radio broadcasting, looking forward to bringing in media sources as well as key individuals such as we did in Lesotho with Bill and Melinda Gates, with former trade representative, Ambassador Robert Zoellick, with the Honorable Sheila Jackson Lee, and working closely with our allies in the international community has shown such interest in Africa such as Prince Harry and the rock star Bono.

Five years after the end of a long and brutal civil war, Sierra Leone itself stands at an important crossroads. With the departure of U.N. peacekeepers in 2005, the country has resumed control of its own security. Earlier this month, the Special Court for Sierra Leone began the trial of Charles Taylor for his involvement in the conflict. This week the court is expected to deliver a verdict in the trial of the former military junta, the Armed Forces Revolutionary Council.

If Sierra Leone succeeds in holding credible, free, and fair elections this August, a process we are actively supporting through the National Democratic Institute as well as local nongovernmental organizations, the transfer of power from President Kabbah to another democratically elected leader would mark an important post-conflict milestone and pave the way for future success.

Despite the positive developments, Mr. Chairman, significant challenges remain that if not properly addressed could again threaten the country's stability. Severe poverty and insufficient health care, especially for women and children, continue to push Sierra Leone to the bottom of the U.N.'s human development index. Widespread youth unemployment, a root cause and catalyst for the civil war, continues to endanger peace. To address these serious issues, the government of Sierra Leone must attack corruption.


If confirmed, I would increase the U.S. mission's focus on improving governance and expand our engagement with Sierra Leone's own anti-corruption commission. Our efforts to promote transparency in the diamonds industry will also continue to be central to our engagement. In this regard, we would draw, as we have done in past positions, on U.S. government expertise, for example, from the Treasury Department's very strong anti-money laundering and anti- corruption divisions, as well as that of nongovernmental organizations.

I believe that promoting good governance and improving the government's capacity to provide basic, sustainable services would have a multiplier effect on our already existing health and agriculture assistance. As a former ACTION Peace Corps official and as a spouse of my husband who is also a former Peace Corps country director in South America and deputy director in Southeast Asia, in Malaysia, I would strongly support the reintroduction of a Peace Corps program in Sierra Leone.

Looking regionally, we should focus on improving Sierra Leone's peace-building efforts within the larger context of the Mano River's sub-region. With Guinea's uncertain political transition and Liberia's fragile peace, Sierra Leone finds itself in a volatile neighborhood. Porous borders and weak governance have created fertile ground for narcotics and small-arms trafficking.

If confirmed, I would collaborate with our ambassadors in Monrovia and Conakry and throughout the region to encourage cooperation, to improve the sub-region's capacity to respond to instability through programs through our various U.S. agencies that have the capacity to strengthen maritime controls, for example, and law enforcement borders controls.

Mr. Chairman, thank you very much for the opportunity to appear before you and the committee today. I look forward to answering any questions you may have.

This story has been posted in the following forums: : Headlines; COS - Sierra Leone; Diplomacy; Congress