Eric Saltzman serves as a Peace Corps Volunteer in Belize 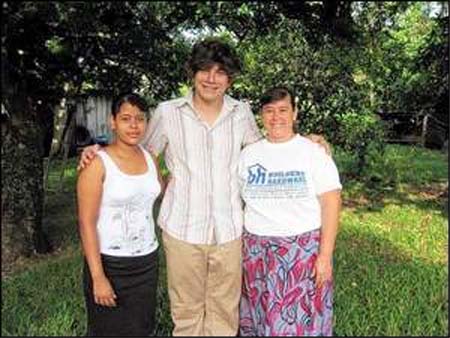 "I am currently living in a Kriol-speaking village called Lucky Strike, which is made up of about 300 people. I am training here for six weeks with four other Peace Corps trainees. I have been here about three weeks now. I work six days a week, planning programs for the children of Lucky Strike and implementing them, and learning the Kriol language four hours daily. The programs we conduct are Reading Buddies, arts, computers and 4-H, a recreational and community service club, and we work with a youth group in Belize City."

Eric Saltzman serves as a Peace Corps Volunteer in Belize

The conditions were pretty modest: latrines and bucket showers. Nonetheless, we had electricity, refrigeration, and access to some of the products of home. Six days a week, I traveled by public bus to the Peace Corps office in the capital, Belmopan.

My Spanish was getting real good because my host mother, Joaquina, only speaks Spanish, but alas, the Peace Corps decided I was to learn the dying, yet surviving language of Belizean Kriol. It is a hilarious language for someone that has never spoken it to learn, which originated in slave times in the Caribbean. The slaves spoke in many different tongues and dialects and, in order to have a common language that the slave owners could not understand, the slaves created Kriol; hence, it is based on English and West African languages. Much of the language sounds like what Americans may think Jamaican sounds like, but with a slightly different accent and rhythm. But the grammar is quite different, and because it has other influences — Spanish and West African languages — there are many words that do not resemble English at all.

The Kriol people are very fun-loving, and they joke about sex using innuendo often. They are very much into their own proverbs, and they have a saying for just about everything. One easy one is: Haad eyaaz pickiney goh maakit too tyeemz. Translation: A child who doesn't listen goes to the market twice. This obviously is used when a child isn't listening to what someone has said to him or her. Some fun words in Kriol that I like are shitninz (diarrhea), bad (good), wicked (good), you dah gel (roughly, you're cool), and any word with a "th" — such as "thing" — which gets changed to "ting."

Around three weeks ago, my training group was all broken up around the country for the six weeks that remained of training. The bulk of training is known as community-based training, meaning that it all takes place with us being immersed into a community. This is opposed to the first 2 1/2 weeks when I lived in Armenia, but took part in center-based training, which took place at the Peace Corps office daily.

I am currently living in a Kriol-speaking village called Lucky Strike, which is made up of about 300 people. I am training here for six weeks with four other Peace Corps trainees. I have been here about three weeks now. I work six days a week, planning programs for the children of Lucky Strike and implementing them, and learning the Kriol language four hours daily. The programs we conduct are Reading Buddies, arts, computers and 4-H, a recreational and community service club, and we work with a youth group in Belize City.

My living conditions have changed dramatically, and — as you will soon find out — do not reflect a normal host family situation, nor home in general, in Belize. The house I moved into in Lucky Strike for community-based training for the next six weeks is, frankly, ridiculous. The other places in this town are what you'd expect in a Third World country, but mine is, well, quite different. I have my own very large room with a bed, hammock, and private bath with hot showers. The house has a wraparound porch around its enormous body and is on about 20 acres of land, which my host father tends to keep himself busy, more or less.

They're really into organic food, so all of the livestock and crops are tended accordingly. All of the food and drinks we consume, such as pineapple, mangoes, melon, eggs, chickens, rice, corn, and cucumbers are from the farm. It's mango season, and Belize has a ton of variety of mangoes. In my house, it's pretty much all-you-can-eat mango, avocado and fresh eggs.

I kind of feel bad about the absurdity of the house, but I, of course, am loving it too. Two of the other four trainees in Lucky Strike with me do not even have a flush toilet, to give you an idea of the separation of wealth in this village of only 300.

I have a younger host brother and sister, ages 4 and 9, respectively; I'm the oldest of three just like at home. My host sister is away a lot, but I've gotten to know Will, my host brother quite a bit. He was adopted about a year ago. He is quite loving, but he will talk your ear off about nothing at all for as long as you let him.

My host parents are both very knowledgeable on the Belize human condition, Belizean politics and history. My host mother here was formerly the financial secretary of the Ministry of Finance of Belize, as well as a doctor of economics. She has a great attitude about life and her laugh is infectious. I have gained quite a perspective already on the problems facing Belize from the passionate discussions that my host father and I often partake in. He claims to be a solitary man, and I agree; he doesn't like to speak in front of audiences — which is a shame — but he is a philosophical man who sees merit in the discussion and analyzing of anything.

Many of our conversations, or his lectures to me, are relating to his frustration regarding the Kriol post-colonial mindset, the resulting economic and social situation for these people, and the intellectual vacuum created in Belize by the prevalence of Belizean migration to the States. Because I am here to improve Belize, this information is invaluable to me; his thoughts give me an insight into Belize that I could only comprehend through the experience of someone who is able to see into the intricacies and nuances of this land.

Of course, I will not be working in the political realm; in fact, I am instructed to remove myself from it as much as is possible. A look into the Kriol way of thinking, however, allows me to think about my approaches in interacting with the youth, equipped with a new perspective, one I could never learn from reading a book or attending a Peace Corps training workshop.

This story has been posted in the following forums: : Headlines; COS - Belize