Mali RPCV Bryan Lonegan, an outspoken lawyer who until recently worked for the Legal Aid Society of New York’s Immigration Law Unit, is known for exposing abuses in detention and deportation 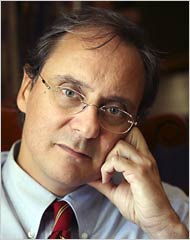 Bryan dates his political awakening to a day in 1974 when he was cleaning string beans with his grandmother and heard President Richard M. Nixon resign. “Suddenly I had a revelation that history wasn’t a separate topic, history was current events,” he said. And as he began following the news of abuses by intelligence agencies, his grandfather’s antigovernment views resonated in a whole new way. Bryan graduated from New York University, where he studied journalism. He later went to Vermont Law School after pursuing antipoverty work that included building clinics in Mali, inWest Africa, with the Peace Corps, where he met his wife, Mary.

Mali RPCV Bryan Lonegan, an outspoken lawyer who until recently worked for the Legal Aid Society of New York’s Immigration Law Unit, is known for exposing abuses in detention and deportation

In a New Jersey Town, an Immigration Fight Pits Brother Against Brother

Bryan Lonegan, a prominent immigrant rights advocate, gets the question all the time. Is he related to Steven M. Lonegan, the Republican mayor of Bogota, N.J., who demanded last year that McDonald’s remove a billboard written in Spanish and who then pushed to make English the town’s official language?

Steve Lonegan, the mayor of Bogota, N.J., wants to crack down on illegal immigrants.

The answer prompts chuckling comments like, “You must have great Thanksgiving dinners!” They are indeed brothers, living three blocks apart in Bogota (pronounced Bo-GO-da), where 21 percent of the 7,900 residents are Hispanic.

Steven Lonegan, who is 51 and is known as Steve, is the leader of the New Jersey Republican Party’s most conservative wing. His campaign against the McDonald’s billboard thrust him into the national spotlight of talk television and Internet debate about immigration. Now, he is pushing to use the local police to ferret out illegal immigrants.

Bryan Lonegan, 48, an outspoken lawyer who until recently worked for the Legal Aid Society of New York’s Immigration Law Unit, is known for exposing abuses in detention and deportation. He is now developing an immigrant workers’ legal clinic at Seton Hall University School of Law.

But no, they do not trade views over family dinners. After years of mutual support that defied their political differences, the Lonegan brothers abruptly stopped speaking to each other in February 2005. And no one is more upset about the rift than their 74-year-old mother, Marie.

“It’s breaking my heart,” said Mrs. Lonegan, a widow who lives in neighboring Ridgefield Park, in the house on Main Street where she raised Steve and Bryan with the help of her parents, who were Italian immigrants.

Maybe only brothers could take politics so personally. Maybe family values go only so far. Yet for years, the Lonegan brothers managed to bridge the political gap that opened when they were teenagers, when Steve put a poster of Gerald Ford in his bedroom and Bryan countered with one for Jimmy Carter.

In 1995, Bryan, a Democrat who had become disenchanted with the Clinton administration, even joined the Republican Party at the request of his older brother, who is legally blind, in order to serve as manager of his mayoral campaign.

A decade later, the brothers became estranged when Bryan quietly quit the Republican Party — because of opposition to the Bush administration — in the middle of Steve’s losing primary campaign for New Jersey governor.

Since the rift, their political differences have widened, as immigration became a wedge issue in communities across the country.

“For the last two years, my brother’s been on an anti-immigrant kick,” said Bryan, reacting to Steve’s recent suggestion that the Bogota police be deputized as federal immigration agents. “He’s playing a very dangerous game, and he’s doing it for political points, not because it makes sense in the community, but because this is a way for conservative politicians to hold on to what they’re losing.”

Steve, a big, brusque, ruddy-faced man who was an all-state lineman at William Paterson University, seemed momentarily nonplussed when his brother’s views were relayed. But he quickly recovered his stride.

“People who are pro-illegal immigration say you’re fanning the flames if you don’t shut up and go along with what they want,” he said. “I’ll stand up for legal immigrants instead of abandoning our principles to let illegal aliens in the country to shoot people in the head.” He was alluding to the recent schoolyard killings in Newark, in which two of the men accused in the three murders were suspected of being in the country illegally.

To some people, how these brothers ended up on opposite sides of the immigration debate may seem like less of a mystery than how they stayed close for so long.

Their falling-out breached a bond forged in adversity. Steve was 17 and Bryan 14 when their father died suddenly of an aneurysm at age 42. Steve, a high school track star, was losing his sight to a degenerative eye disease, retinitis pigmentosa. For a time, their mother worked three jobs.

Both say they were strongly influenced by their maternal grandfather, Salvatore Trapani, a staunch Republican who rose from sweeping floors in the garment industry to making a small fortune in real estate, and who despised the social programs of President Franklin Delano Roosevelt. Bryan, a history buff, would argue fiercely in defense of Roosevelt.

“I don’t know where he went wrong,” Steve said dryly of his brother, suggesting that he might have been born a liberal.

Bryan dates his political awakening to a day in 1974 when he was cleaning string beans with his grandmother and heard President Richard M. Nixon resign. “Suddenly I had a revelation that history wasn’t a separate topic, history was current events,” he said. And as he began following the news of abuses by intelligence agencies, his grandfather’s antigovernment views resonated in a whole new way.

Steve earned an M.B.A., married into an Italian-American family in Bogota and — shunning what he called “the quicksand of the entitlement state” — turned a failing kitchen cabinet business into a financial success before selling it in 2001.

Bryan graduated from New York University, where he studied journalism. He later went to Vermont Law School after pursuing antipoverty work that included building clinics in Mali, in West Africa, with the Peace Corps, where he met his wife, Mary.

“Growing up, I thought the whole world was Irish and Italian Catholic,” recalled Bryan, the smaller, leaner, darker-haired brother, who said he almost traded law for art. Now his neighbors in Bogota, founded by Dutch settlers who displaced Lenape Indians, include families from Egypt, Pakistan, Africa and Latin America.

Bogota has no day laborers, said Steve, who directs the New Jersey chapter of Americans for Prosperity, which promotes free-market policies. But illegal rental units have popped up, he warned, and “the cost to taxpayers of running our school system, if you throw in a couple of illegal immigrant students at $15,000, $16,000 a student, that adds up.”

Moreover, he added, “There are some people who trash Main Street, and they seem to be foreign born.”

That remark drew a howl when relayed to Bryan. “Teenagers on the way to high school are trashing Main Street,” he said. “They’re white, they’re black, they’re brown, they’re yellow, and you know what? They’re all slobs.”

“It’s demagoguery,” he added. “It’s disingenuous to say, ‘We’re just concerned with the illegal immigrants.’ Trying to make English the official language — what does it say to immigrant families? “

It says assimilate, Steve maintained, noting that his grandparents would not speak Italian at home — though his daughter Brooke is now in Florence learning it.

Responses to his billboard battle were 3 to 1 in his favor, he said. Those he saved included a note written on a Dunkin’ Donuts napkin — “Thank G-d for you I need not be subjected to learning their language” — and an e-mail message that read, “It’s not just billboards, but every Spanish sign in every store that needs to go.”

Steve said he saw no inconsistency between championing the free market and opposing advertising in Spanish. In a book that he is soon to publish himself, he writes, “McDonald’s should realize that in promulgating bilingualism, they are empowering the left wing that sees bilingualism as one more arrow to the heart of our democracy.”

To Bryan, his brother’s new rhetoric, and their estrangement, is a frightening sign of the times. “My family’s situation reflects the political reality in this country now — that civil political discourse and the democratic agreement to disagree has broken down in favor of polarizing invective,” he said.

After the Sept. 11 attacks, Bryan took calls from the families of hundreds of Muslim immigrants who were rounded up at the Metropolitan Detention Center in Brooklyn.

“This was John Ashcroft’s effort to manipulate public opinion,” he said, referring to the former attorney general. “And then conservatives questioned my patriotism because I questioned them.”

Bryan argued that the episode showed the threat to due process when immigration enforcement replaces criminal law enforcement. “You’re just steps away from the same thing if you set this up in New Jersey,” he said of proposals like his brother’s to deputize local police as immigration officers.

Yet the Lonegans still praise each other — within limits. Said Steve: “My brother’s doing great work. He stands up for people’s rights under the Constitution. It has nothing to do with making public policy.”

Said Bryan: “My brother’s a brilliant businessman and a gifted administrator. He turned this town around.” But he added: “Before, his conservatism was his business. Now he’s on my turf.”

At her kitchen table, Mrs. Lonegan recalled the days when the brothers played army with neighborhood children. One afternoon Bryan came in with a question, “Ma, how come Steve always gets to be the general?”

“I personally respect them both for sticking to what they believe, which may sound crazy,” she said, hoping for reconciliation, but ready to serve yet another round of separate lasagna dinners.

This story has been posted in the following forums: : Headlines; COS - Mali; Law; Immigration