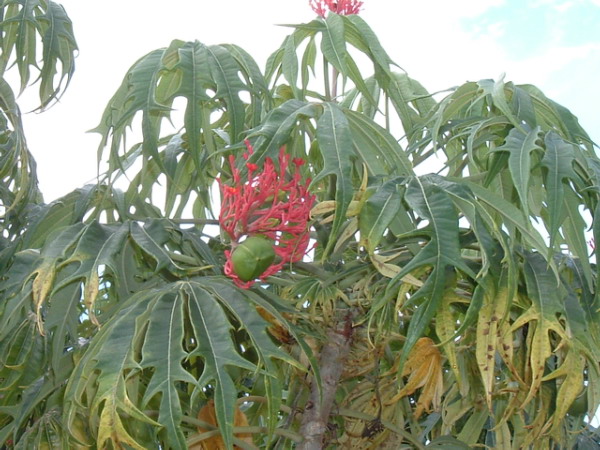 Poor farmers living on a wide band of land on both sides of the equator are planting it on millions of acres, hoping to turn their rockiest, most unproductive fields into a biofuel boom. They are spurred on by big oil companies like BP and the British biofuel giant D1 Oils, which are investing millions of dollars in jatropha cultivation.

KOULIKORO, Mali Ś When Suleiman Diarra Bananiĺs brother said that the poisonous black seeds dropping from the seemingly worthless weed that had grown around his family farm for decades could be used to run a generator, or even a car, Mr. Banani did not believe him. When he suggested that they intersperse the plant, until now used as a natural fence between rows of their regular crops Ś edible millet, peanuts, corn and beans Ś he thought his older brother, Dadjo, was crazy.

ôI thought it was a plant for old ladies to make soap,ö he said.

But now that a plant called jatropha is being hailed by scientists and policy makers as a potentially ideal source of biofuel, a plant that can grow in marginal soil or beside food crops, that does not require a lot of fertilizer and yields many times as much biofuel per acre planted as corn and many other potential biofuels. By planting a row of jatropha for every seven rows of regular crops, Mr. Banani could double his income on the field in the first year and lose none of his usual yield from his field.

Poor farmers living on a wide band of land on both sides of the equator are planting it on millions of acres, hoping to turn their rockiest, most unproductive fields into a biofuel boom. They are spurred on by big oil companies like BP and the British biofuel giant D1 Oils, which are investing millions of dollars in jatropha cultivation.

Countries like India, China, the Philippines and Malaysia are starting huge plantations, betting that jatropha will help them to become more energy independent and even export biofuel. It is too soon to say whether jatropha will be viable as a commercial biofuel, scientists say, and farmers in India are already expressing frustration that after being encouraged to plant huge swaths of the bush they have found no buyers for the seeds.

But here in Mali, one of the poorest nations on earth, a number of small-scale projects aimed at solving local problems Ś the lack of electricity and rural poverty Ś are blossoming across the country to use the existing supply of jatropha to fuel specially modified generators in villages far off the electrical grid.

ôWe are focused on solving our own energy problems and reducing poverty,ö said Aboubacar Samaké, director of a government project aimed at promoting renewable energy. ôIf it helps the world, that is good, too.ö

Jatropha originated in Central America and is believed to have been spread around the world by Portuguese explorers. In Mali, a landlocked former French colony, it has been used for decades by farmers as a living fence that keeps grazing animals off their fields Ś the smell and the taste of the plant repel grazing animals Ś and a guard against erosion, keeping rich topsoil from being blown away by the harsh Sahel winds. The Royal Tropical Institute, a nonprofit research institution in Amsterdam that has been working to develop jatropha as a commercial biofuel, estimates that there are 22,000 linear kilometers, or more than 13,000 miles, of the bush in Mali.

Jatrophaĺs proponents say it avoids the major pitfalls of other biofuels, which pose significant environmental and social risks. Places that struggle to feed their populations, like Mali and the rest of the arid Sahel region, can scarcely afford to give up cultivable land for growing biofuel crops. Other potential biofuels, like palm oil, have encountered resistance by environmentalists because plantations have encroached on rain forests and other natural habitats.

But jatropha can grow on virtually barren land with relatively little rainfall, so it can be planted in places where food does not grow well. It can also be planted beside other crops farmers grow here, like millet, peanuts and beans, without substantially reducing the yield of the fields; it may even help improve output of food crops by, among other things, preventing erosion and keeping animals out.

Other biofuels like ethanol from corn and sugar cane require large amounts of water and fertilizer, and factory farming in some cases consumes substantial amounts of petroleum, making the environmental benefits limited, critics say. But jatropha requires no pesticides, Mr. Samaké said, little water other than rain and no fertilizer beyond the nutrient-rich seed cake left after oil is pressed from its nuts.

The plant is promising enough that companies across the world are looking at planting millions of acres of jatropha in the next few years, in places as far flung as Brazil, China, India and Swaziland. A company based in Singapore has announced plans to plant two million hectares, about 4.9 million acres, of jatropha in the Philippines.

Here in Mali, a Dutch entrepreneur, Hugo Verkuijl, has started a company with the backing of investors and assistance from the Dutch government, to produce biodiesel from jatropha seeds.

Mr. Verkuijl, 39, an economist who has worked for nonprofit groups, is part of a new breed of entrepreneurs who are marrying the traditional aims of aid groups working in Africa with a capitalist ethos they hope will bring longevity to their efforts.

ôAn aid project will live or die by its funders,ö Mr. Verkuijl said, but ôa business has momentum and a motive to keep going, even if its founders move on.ö

His company, Mali Biocarburant, is partly owned by the farmers who will grow the nuts, something he said would help the business to succeed by giving the farmers a stake.

It takes about four kilograms (about 8.8 pounds) of seeds to make a liter of oil, and Mr. Verkuijl will sign contracts with farmers to buy the seeds in bulk. The fuel he produces will cost about the same as regular diesel, he said Ś more than $1 a liter, which is about 1.06 liquid quarts. He will also return the nutrient-rich seed cake, left after the seeds are pressed for oil, to the farmers to use as fertilizer. He said he hoped to produce 100,000 liters of biodiesel this year and 600,000 a year by the third year.

Even if jatropha proves a success in Mali, it is still not without risks. If farmers come to see it as more valuable than food crops, they could cripple the countryĺs food production.

These kinds of worries led a recent United Nations report on biofuels to conclude that ôthe benefits to farmers are not assured, and may come with increased costs,ö the report said. ôAt their worst, biofuel programs can also result in a concentration of ownership that could drive the worldĺs poorest farmers off their land and into deeper poverty.ö

This story has been posted in the following forums: : Headlines; COS - Mali; Agriculture; Energy