Martin Puryear Gets His Due 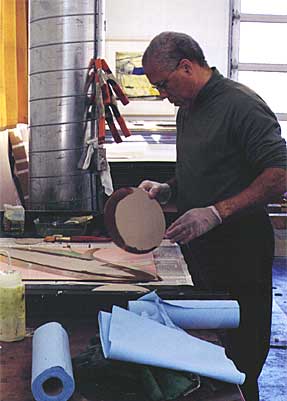 In 1964, a year after graduating from college (where he eventually majored in fine art, concentrating in painting and illustration), Puryear enrolled in the Peace Corps and taught in Sierra Leone until 1966. In West Africa he was impressed by local metalwork and jewelry, and his interests in carpentry and woodcarving were rekindled as he met and studied with traditional craftsmen, who taught him to work wood with hand tools. After completing his commitment to the Peace Corps, Puryear continued to study traditional crafts, immigrating to Stockholm to study handcrafting and carpentry at the Swedish Royal Academy of Arts.

Martin Puryear Gets His Due

Martin Puryear Gets His Due
By Robert Ayers
Published: November 2, 2007

NEW YORK—Martin Puryear’s 1984 sculpture Greed’s Trophy is typical of his work in that it seems to be several things at the same time. More than 12 feet high and crafted from steel rod and wire, wood, rattan, and leather, its form suggests something organic—an enormous seed pod or seaweed bladder, perhaps—but, despite its size, it also hints at usefulness, and hangs on the wall like a huge, unwieldy butterfly net or threshing tool. At the same time, the work is just inexplicable and beautiful enough to exist as an object that invites aesthetic contemplation.

Puryear, an underappreciated sculptor whose work evokes natural forms, traditional construction techniques, and the grand scale of contemporary art, is the subject of a 30-year retrospective opening at MoMA this Sunday. His professional career began at the close of the 1960s, and his work derives from the Minimalist and Postminimalist currents prevalent at the time. His sculptures tend to be discrete objects that declare their relationship to their surroundings, maintain an extreme simplicity in their overall form, and employ geometrical or semi-geometrical elements. But his richly suggestive art also stands out from that of his Minimalist contemporaries in several crucial ways, a deviation that is largely explained by his early training.

To begin with, contradictions are everywhere in Puryear’s art: Often, as in Deadeye (2002), which has the smooth curves of a huge ceramic flask but is actually carved from pine, one material is made to look like another; or, as in The Nightmare (2001–02)—again carved from wood but having a bottle-like mouth—a piece can seem at once solid and hollow. Elsewhere Puryear’s sculptures seem to exist in different sculptural realms at the same time: The title and simple form of Lever #3 (1989) suggests that it is to be seen as an abstract piece, demonstrating no more than a physical principle, but it is also quite obviously a rather cartoonlike representation of a long-necked dinosaur. Such tensions rarely resolve themselves in any simple way; the sculptures, as Puryear would say, retain their “mystery.”

Lever #3 is far from the only example of a title adding a level of resonance or intrigue to the art. A 36-foot-long jointed ash ladder from 1996, a work that twists and bends and, because of the false perspective that it employs, seems even longer that it is, is dubbed Ladder for Booker T. Washington, after the celebrated civil rights leader. One senses that Puryear is at once commenting on the duration and difficulty of Washington’s struggles, and—because the ladder rises higher and higher and seems to float in the air—marveling at his eventual achievements. Other equally evocative names, such as Believer (1977–82), The Charm of Subsistence (1989), and Confessional (1996–2000), hint at realms of philosophy or religion, as though Puryear is inviting us to look beyond the work’s formal characteristics to find our own interpretations of their content. On the other hand, a number of other pieces, in late modernist tradition, remain laconically untitled.

Modernist Effects, Pre-Modern Roots
Crucial to Puryear’s ethos is a belief in the creative importance of craft. At a time when leading Minimalists like Carl Andre, Dan Flavin, and Donald Judd were adopting an impersonal, mass-produced industrial aesthetic, which often involved working in manufacturing settings and sending drawings or designs to a fabricator, Puryear remained wedded to the single edition and the handmade. Throughout his career, he has felt that the physical manipulation of materials is essential to his sculptures’ possibilities, and he has spoken of his respect for “vernacular cultures, where people are closer to the source of materials and making objects for use.”

Puryear was born in Washington, D.C., in 1941, the first of seven children. From an early age he showed a particular interest in craft techniques (his passion for basket weaving remains a recurrent influence on his art) and carpentry. “I was always interested in building things,” he has said. “Not sculpture so much, but functional things—guitars, furniture, canoes, and so on.” He was also fascinated by the workings of the natural world and briefly considered a career as an animal illustrator, entering the Catholic University of America as a

In 1964, a year after graduating from college (where he eventually majored in fine art, concentrating in painting and illustration), Puryear enrolled in the Peace Corps and taught in Sierra Leone until 1966. In West Africa he was impressed by local metalwork and jewelry, and his interests in carpentry and woodcarving were rekindled as he met and studied with traditional craftsmen, who taught him to work wood with hand tools. After completing his commitment to the Peace Corps, Puryear continued to study traditional crafts, immigrating to Stockholm to study handcrafting and carpentry at the Swedish Royal Academy of Arts.

By the time Puryear returned to the United States in 1969, his artistic approach was based in physical practice rather than intellectual concepts. At Yale, where he completed an MFA in 1971, he was drawn to the formal simplicity of Minimalism and remained committed to what he called “the power of the simple, single thing,” but he never seems to have been seduced by Minimalism’s studied neutrality. Instead, he was intrigued by organic forms and their expressive possibilities, and he remained committed to the traditional construction and building techniques he had studied in Africa and Sweden, as well as those of Japanese, Arctic, and Native American cultures.

His Own Eccentric Way
Equally important for his development was how, unlike many of his Yale contemporaries, Puryear turned his back on the modernist forcing house that was New York City, and instead went his own eccentric way, accepting teaching positions at Fisk University in Tennessee (1971–73) and the University of Maryland (1974–78). He clearly benefited from these experiences and achieved swift professional success. In 1977 he staged his first solo museum exhibit at the Corcoran in Washington, D.C., and it is at this point that the MoMA retrospective picks up Puryear’s career, featuring some 45 sculptures that he has made in the last 30 years. It charts the career of a sculptor who is always fascinated by the physical characteristics of materials and what might be made from them, but has also been increasingly drawn to their suggestive possibilities.

Apart from anything else, this show provides a telling contrast with this summer’s widely acclaimed Richard Serra exhibit, in what has turned out to be quite a year for contemporary American sculpture at MoMA. Though Puryear is a generation younger than Serra, the two artists share many of the same Minimalist beginnings. But if you view their work side-by-side—Serra’s massive torqued steel statements of physicality and Puryear’s evocative combinations of material and meaning—you’ll be struck more than anything by the breadth of possibilities Minimalism opened up.

“Martin Puryear” is on view at the Museum of Modern Art from November 4, 2007 to January 14, 2008. "Martin Puryear Gets His Due" comes to ARTINFO from the fall 2007 issue of Museums magazine, where it was published under the title "Martin Puryear’s Organic Modernism" in a slightly modified form.

This story has been posted in the following forums: : Headlines; Figures; COS - Sierra Leone; Art; Sculpture