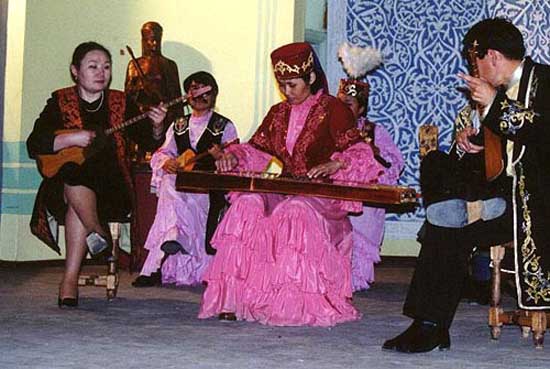 After the sheep's head had been boiled in front of 55-year-old Steve Bradshaw, he was treated with the respect afforded an elder: He was given the animal's eye to eat. "It went down very quickly," Bradshaw said, laughing as he remembered the dinner he experienced five years ago in the Republic of Kazakhstan. "And it stayed down. But it was questionable for a moment or two." That was one of many unusual memories that Bradshaw, now 60, and his wife Linda, 62, shared last week as they sat in the living room of their east Las Vegas home and reminisced about their days as Peace Corps volunteers in the former Soviet republic from 2002 to 2004.

Seniors! Join the Peace Corps: eat a goat's eye
By PAUL HARASIM
Stephens Media
After the sheep's head had been boiled in front of 55-year-old Steve Bradshaw, he was treated with the respect afforded an elder: He was given the animal's eye to eat.


"It went down very quickly," Bradshaw said, laughing as he remembered the dinner he experienced five years ago in the Republic of Kazakhstan.

"And it stayed down. But it was questionable for a moment or two."

That was one of many unusual memories that Bradshaw, now 60, and his wife Linda, 62, shared last week as they sat in the living room of their east Las Vegas home and reminisced about their days as Peace Corps volunteers in the former Soviet republic from 2002 to 2004.

The respect the Kazakh people had for the Bradshaws is shared by the organization that sent them overseas. The Peace Corps is currently in a push to increase its ranks of volunteers who are over 50 years old. Peace Corps officials would like to see that demographic make up 15 percent of its volunteer force in the next couple of years, up from 5 percent.

"They have more than 30 years of expertise to share," Peace Corps Director Ron Tschetter said of older volunteers in a telephone interview last week from his Washington, D.C., office. "Host countries appreciate that."

The proposed increase in older volunteers, Tschetter said, goes hand-in-hand with a 2004 directive by President Bush to double the size of the Peace Corps, which then numbered 6,500.

Today, nearly 8,000 men and women serve in the Peace Corps, receiving a stipend that gives them just enough money to live like the population they're helping. The Bradshaws received about $140 a month; upon leaving the Peace Corps, each received $6,000.

The Bradshaws didn't know each other before they left for Kazakhstan. He was from Arizona, she was from Texas. Their relationship developed as they took Russian language courses in the country that sees temperatures rival the lows of Alaska and reach the highs of Nevada. They came to Las Vegas in 2004 and were married here.

In Kazakhstan, her husband taught English and economics at a university while she largely trained people on how to write grants and farm chickens.

"You feel good because you're helping people, but you also learn to really appreciate what we have in the United States," Linda Bradshaw said.

Such as indoor plumbing.

Using an outhouse in a place where the temperature is 40 below zero isn't easy, particularly in the dark.

"You have to carry toilet paper with you wherever you go," she said, an observation that her husband didn't entirely agree with.

"You can tear pages out of magazines and books that are left outside outhouses, just like everybody else," Steve Bradshaw said.

In many places, running water is only a dream. Few people own cars. A washing machine, the Bradshaws explain, is your own hands.

"People do have a tendency to smell bad," Linda Bradshaw said. "But they are very nice and you get used to it."

"Market research shows they are givers, people who like to volunteer," he said. "But what we encounter right now is that so many of them don't have a clue that we want them."

That is not particularly surprising, he notes, given that the Peace Corps since its inception has largely focused its recruiting efforts on college campuses.

Tschetter said new college graduates will still continue to comprise the vast majority of Peace Corps volunteers, but other recruiting efforts are being made through organizations such as the AARP and the National Retired Teachers Association.

"You wouldn't have believed the interest in the Peace Corps when we showed up at the AARP annual convention," said Tschetter, who served in the Peace Corps in India when he was in his 20s. One of the volunteers he served with was President Carter's mother, Lillian.

The seeds for the Bradshaws' volunteerism were watered long ago. In their teens they were impressed with President Kennedy's call to reach out and help others less fortunate. They never forgot the message that stirred their idealism. But a wide range of considerations didn't make it possible to act upon that desire until recently.

"The kids were grown and I could afford to do it, so I finally did it," said Steve Bradshaw, a former federal government employee who taught at Kazakh-Russian International University in Aktobe, a city of about 300,000. "I still stay in touch with some of my students through e-mail."

Many of his former students still ask him what to put on a r&#65533;sum&#65533;. Others became so close to him that they want his advice on romantic matters.

Linda Bradshaw, a former hospital staffer in Denton, Texas, might have volunteered earlier had she not been mistaken about the educational requirements.

"I thought you had to have a bachelor's degree to be a Peace Corps volunteer, and I didn't get mine until 2001," she said.

Though a bachelor's degree is desirous to Peace Corps officials, volunteers can also qualify through work experience, if they have unique skills or a two-year college degree.

Volunteers can express a preference for the country in which they would like to serve, but there's no guarantee. Neither of the Bradshaws had requested Kazakhstan.

The world's ninth largest country and the place from which the first man was launched into space, Kazakhstan is bordered by Russia, Kyrgyzstan, Turkmenistan, Uzbekistan and China.

Though larger than all of Western Europe, the country has a population of only 15 million, 4 million less than Mexico City.

Since Kazakhstan declared its sovereignty from the Soviet Union in 1991, there has been much foreign investment, including $15 billion from the United States, in the oil sector.

But poverty and unemployment remain widespread. It is not unusual, Steve Bradshaw said, for the unemployment rate to top 50 percent.

A bilingual country, Kazakh is spoken by about 60 percent of the population, while Russian is spoken by nearly everyone. The Peace Corps trained the Bradshaws in Russian.

Because they were held in such high esteem by the Kazakh people, the Bradshaws had one unusual worry: keeping libations in check.

"There were just so many toasts with vodka that it made it very difficult," Steve Bradshaw said. "Vodka was only a dollar a bottle. Alcoholism is a real problem."

The people, Linda Bradshaw said, "are very hospitable and friendly."

She takes great issue with the depiction that British comedian Sacha Baron Cohen presented in the film: "Borat: Cultural Learnings of America for Make Benefit Glorious Nation of Kazakhstan."

Cohen's fictional character of Borat, the moronic, anti-semitic, misogynist journalist from Kazakhstan, depicted the people "as being so stupid," Linda Bradshaw said. "They're not at all."

Peace Corps volunteers, who often live with host families, are not supposed to get involved in a nation's politics.

"It's often hard to stay neutral," Steve Bradshaw said, particularly when you see bribes being paid routinely to police officers or teachers.

But there is no doubt, the Bradshaws say, that they made a difference in Kazakhstan. People now know the international language of commerce, English, better because of them.

Linda Bradshaw believes she helped women better understand how to apply for grants that can help their families. And her expertise in farming -- she was raised on a farm in Texas -- has helped people raise poultry.

"If you don't have the spirit of adventure, if you don't want to learn about other cultures and help people have a better life, then the Peace Corps isn't for you," Linda Bradshaw said. "My husband and I loved it so much we're thinking about doing it again."

When this story was posted in January 2008, this was on the front page of PCOL:

This story has been posted in the following forums: : Headlines; COS - Kazakhstan; Older Volunteers