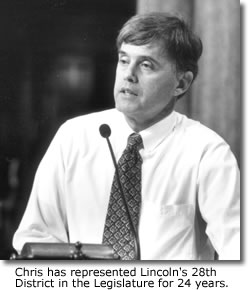 Lincoln Mayor Chris Beutler was also at Friday's event in support of Barack Obama. Chris Beutler joined the U.S. Peace Corps in the 1960's and taught children in Turke then served in the US Army from 1969 to 1971, rising to the rank of First Lieutenant.

(2/08/2008) By Robert Price - Michelle Obama was in Lincoln Friday. A day before the Nebraska caucuses, the "First Lady hopeful" came to gather last–minute support for her husband Barack.

Hundreds of people packed into the Lied Performing Arts Center, as the "First Lady hopeful" spoke for about an hour in support of her husband.

She was here to support her husband Barack.

"What is clear to me is we need a Barack Obama presidency right now," said Obama.

Over the course of an hour, she told the story of Barack's life from his rough upbringing to Harvard Law to Chicago politics to his campaign for president.

Her theme was hope.

"To engage black folks and white folks and brown folks and talk a language that is empowering to us all - imagine a president like that," Obama said.

Her message appeared to connect with the audience.

"It didn't matter what she looked like, she was speaking to them. They were standing up, they were clapping, they were yelling out 'amen'," said Brittany Jones-Cooper.

"I was still undecided, but I think after hearing her speech, I am definitely going to be supporting him," said Roxanna Carlo.

"As a woman, she helps you identify more with Barack," said Jones-Cooper. "She really goes out on the family values that I think are important to a person from the Midwest."

"We have to keep this wave going and we are hoping to keep it going right here in Nebraska," Obama said.

So, Democratic voters have certainly had their fare share of excitement over the past couple of days.

This story has been posted in the following forums: : Headlines; COS - Turkey; City Government; Election2008 - Obama