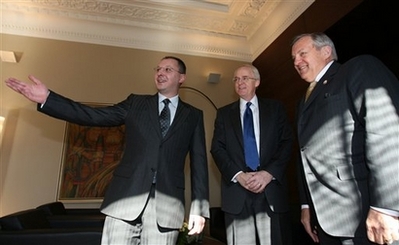 SOFIA, BULGARIA, Feb. 22, 2008 - Peace Corps Director Ron Tschetter visited Bulgaria for the last three days and met with the President and Prime Minister of Bulgaria, as well as Peace Corps Volunteers and staff.

President Parvanov praised the work of the Volunteers in Bulgaria and said, “I have much gratitude for the actions of the Peace Corps over the years in some very important sectors for us.” President Parvanov also discussed Bulgaria’s nascent volunteer and community service movement. “Young people all over Bulgaria are working with archeological sites in old cities without payment. The ideas of President Kennedy are vital for today,” he said.

There are 140 Peace Corps Volunteers currently serving in Bulgaria in the areas of English education, community and organizational development, and youth development. Since 1991, over 900 Volunteers have served in Bulgaria.

Director Tschetter visited several project sites and observed Volunteers working with their Bulgarian counterparts, including Tony Dileo, a Volunteer from Scranton, Penn. who teaches English in a village school. Tschetter also met Volunteer Taylor Vaught from Trenton, MI. Vaught works with a foundation that focuses on education for Roma youth in his community. Vaught is one of many volunteers working with minority populations in Bulgaria.

When this story was posted in March 2008, this was on the front page of PCOL:

This story has been posted in the following forums: : Headlines; COS - Bulgaria; Tschetter