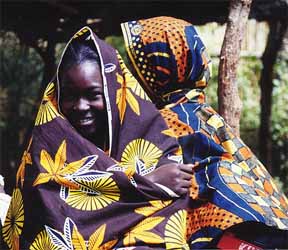 Niger is West Africa's largest country, approximately the size of Western Europe. It is also one of the world's poorest countries and is dominated by the Sahara desert, which occupies much of the land. Niger is predominantly Muslim and has a conservative culture. The country's efforts to develop include a desire to have more people learn English so that they can better communicate with its English-speaking African neighbors and with the rest of the world. One measure of the importance placed on English training is the fact that it is a requirement for the baccalaureate degree. Peace Corps English teachers are a major part of this development effort.

One Peace Corps Volunteer involved in this project designed and conducted lesson plans based on the Nigerian government's 6-point lesson plan for teaching English, which uses predominantly oral methods. Students in Niger are expected to achieve functional fluency and to be able to pass the baccalaureate exam at the end of high school. The Volunteer worked in a semi-rural secondary school, where he taught approximately 20-30 hours per week to students ranging in age from 12 to 20. Classes had up to 60 students. He also was expected to help with school sports teams and help organize extra-curricular activities such as a school library and an English club. He also had to fulfill many regular administrative duties, as in any school, such as correcting student papers, preparing lesson plans, proctoring exams, and substituting for other teachers as needed. He was required to speak French, Niger's official language, in the performance of his primary job, but also learned Hausa, a local dialect. Language acquisition was an important factor in his acceptance into the community in which he lived, as was the Volunteer's perseverance in adjusting to the culture.

The Volunteer had to adjust his expectations upon arrival in Niger. English teaching is not a 9-5 job. The school year began in early October and ended in July. There were breaks between the semesters along with occasional holidays and student strikes. Throughout his assignment, especially when school was not in session, the Volunteer had to be creative and flexible. Like most volunteers, he possessed skills that could be used outside of teaching English. He undertook a few secondary projects, among them a school gardening project, and work with local youth groups. These projects were not only very rewarding elements of his volunteer experience, but they also aided in Niger's development goals.

He had to be prepared to function socially and psychologically in a culture quite unlike his own. He lived in a concrete house on the grounds of his school with other teachers. Many of the things he had taken for granted as an American were simply not available, such as electricity, running water, flush toilets, easy communication and transportation, and even a variety of foodstuffs. Like all volunteers in Niger, he had to make adjustments in his eating and living habits. The government of Niger provided adequate housing according to local standards, with Peace Corps providing limited other necessities for his living conditions. However, little support was provided for his work assignment (e.g. texts, duplicating machines, writing materials, etc.). His two-year service in Niger proved to be a continual challenge to his ingenuity. He left the country with warmth and appreciation for the Nigerien people, as well as the knowledge that it had been a personally rewarding experience.