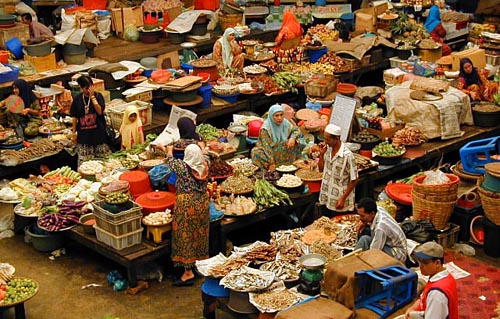 (Historical note: I wrote this in 1970. The second paragraph refers to a song, "San Francisco", by Scott McKinzie. It was about the "Summer of Love" in San Francisco in 1968. Its chorus was "And when you go to San Francisco, be sure to wear a flower in your hair.")

What do you talk about when you're walking through the jungle with a group of natives, and you've only been in Borneo for a week? Sometimes the natives are as curious about you as you are about them.

"Is it true that when you go to San Francisco you have to wear a flower in your hair?" asked Robert.

Robert was a Land Dayak and a student at the State Teacher's Training College in Kuching, Sarawak's capital. Sarawak, in turn, is a state in the Federation of Malaysia. It lies along the northwest coast of the island of Borneo. I was a Peace Corps Trainee at the time. Our group used some rooms at the same college. Twelve of were training to be secondary school teachers. Six of us had taken Robert up on his offer to go home with him for the weekend and get some first-hand experience in slash and burn agriculture.

I explained, as we struggled up a path eight inches wide, that the song he had heard was fairly old, and that even when it had been current the custom had been optional.

We walked under trees so high that they needed flying buttresses of root for support, climbed over one that had failed, and tripped on the pencil-thin vines that rasped at our ankles. Robert asked some more questions about the hippies, and eventually we reached the top of a long ridge.

The Land Dayaks are really Bidayuhs. In the old days another tribe, the Ibans, would sweep into Bidayuh territory from the sea, to take heads. The Bidayuh began to build their villages higher and higher in the hills, for protection, until they had their villages perched on the very tops of the hills and ridges of Sarawak's First Division. Europeans invented the term "Dayak", then labeled the Bidayuh "Land" Dayaks and the Ibans "Sea" Dayaks to keep them straight. Headhunting stopped in the 1890's or so, but traditions die hard. Even today you have to climb if you visit a Bidayuh village.

We had come out at the low end of the ridge. As we walked along it towards the village proper, we passed the community water supply. A bamboo pipe led water from a spring, then let it fall about three feet. As we passed we saw school children filling up lengths of bamboo, to carry water home. The scene could have been acted out any time in the past four thousand years, I mused, except that back in the Neolithic age the kids didn't wear hand-me-down school uniforms to do the daily chores.

A Bidayuh village is a large, rambling affair built on stilts. The houses have wood frames, and, depending on the wealth of the family, wooden, corrugated tin or palm leaf thatch sides and roofs. The houses join each other and surround a platform. They are built together to save time and money, and as a measure of protection -- another custom from old. The platform is used as a drying area, as a playground, and as a village street.

We stopped to peek in at a small structure at one end, the head house. 200 skulls, dusty with age, peered back at us. Not all of the aggressive Ibans had snuck away, Robert explained. Not all of the Bidayuh were simple, peace-loving rice farmers, I suggested. They were - most of the time, Robert said with a grin.

As we came into the village proper we heard strange music coming from a large meeting hall at the far end of the village. Robert told us there was to be a dance that night. "Ah ha," I thought, "down there are strange instruments with odd numbers of strings and exotic shapes, making music in keys unheard by these western ears. The musicians are older men, bronzed fingers wrinkled but still supple as they fly across the strings."

This too deserved a peek.

Inside the meeting hall were, according to the legend sequined on their drum, the "Agri-Coop Boys". I'd never heard an electric guitar powered by batteries before. They had a bank of 24 "D" cells -- enough to generate a respectable sound, but too weak to produce the ear splitting blasts I had been used to in the US. They were playing in a key foreign to western ears, but not by design.

We helped pluck chickens and chop vegetables for dinner that afternoon. Dinner was typical for Borneo; large plates of rice, big bowls of chicken and vegetables, all washed down with tuak, a sweet rice beer. Then we were off to the dance.

Ah, Borneo, land of exotic names and strange customs It was the custom of adolescent boys in this village to hang about the edge of the dance floor, urging each other to be the first to ask a girl to dance. Eventually the dance started to swing. Later on the bandleader asked for volunteers to sing. Carol, one of our group, wowed the locals with her version of "Summertime". They didn't admire her talent as much as her movement; local girls don't move at all when they sing. Carol did, modestly by western standards; just a little emphasis with her hip at the end of each line. Still, it was noticed. The whistles and cheers punctuated her song as much as she did.

We slept on the floor that night -- split bamboo over wide-spaced joists, springy but firm -- awoke to a breakfast of coffee and biscuits, and went off to plant rice.

The Bidayuh plant hill rice. It grows on hills, as the name suggests, but without terraces or irrigation. In July Kurda, the gentleman we stayed with, had cleared his field. First he'd slashed all of the small brush with his "parang", which is a pointed machete. Then, using an ax and a special, larger parang, he'd cut down most of the large trees on the slope. He had left three trees for the birds to sit on, in the hopes that they would sit there, instead of eating his rice.

After the cut brush and trees had had a chance to dry out, he had sprinkled some kerosene around, prayed to the various spirits who govern the winds and rain, then touched it off. With 160 inches of rain a year he didn't have to worry about the fire spreading; it browned four feet of uncut jungle along the edges of the field and sputtered out. Now, in September, the field was covered with a thin layer of ash, ready for planting.

We reached the field after an hour's walk over steep hills and past other people's farms. (The Bidayuh clear new fields each year, gradually moving further from their village.) Kurda's daughter led the way. She was used to the little jaunt. She didn't even have the courtesy to sweat as we panted along behind her, wondering if she would stop to catch her breath.

At the field Kurda cut a dibble stick for each man, sharpening the end with his parang. We started to work in a line, moving across the hill. Kurda was soon ahead of us, his arm moving up and down like a piston, poking a hole, giving his stick a quarter twist, as he pulled it out, plunging it in again. Take a step, punch four holes, take another step, punch four more holes, slip, take a step, punch four more holes. After a while I set up a rhythm, broken when I slipped on the steep hill, never as fast as Kurda. The ash swirled, sometimes getting in my nose, usually just blackening my shoes.

The women followed us, bent double, dropping seed rice into the holes made. Their ragged line moved slower than ours did, since their job was more exacting. Kurda said this was as it always was.