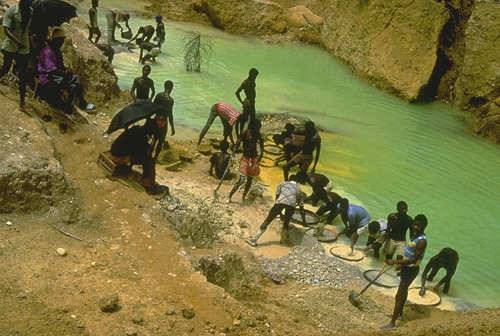 With 500 peacekeepers still held hostage, unprecedented barbarity against civilians, and the further diminishing of the stature of the United States in Africa, the "...consequences of failure in Sierra Leone justify a robust course of action by the United States that leads, first and foremost, to the restoration of security in Sierra Leone," said the organizations in their letter to Clinton.

Noting his role in "resolving conflict and threats to the peace in Bosnia and Kosovo ", the organizations declared that the President's "intervention is now critical to focusing international attention and resources on bringing Sierra Leone's misery to an end."

Friends of Sierra Leone (FOSL) and Friends of Liberia (FOL) urgently request that you exercise leadership to avert a humanitarian and political catastrophe in Sierra Leone.

We have seen a rapid and disturbing deterioration of the peace process in Sierra Leone over the past several weeks instigated primarily by the Revolutionary United Front (RUF). The RUF has attacked and murdered peacekeeping troops, stolen their equipment and held up to 500 peacekeepers as hostages. These actions by the RUF have undermined the effectiveness of the United Nations peacekeeping force (UNAMSIL) and its capability to protect civilians and deter factional fighting.

Clearly, UNAMSIL is not adequately prepared to cope with the current crisis in Sierra Leone. The Security Council expanded UNAMSIL's mandate in February pursuant to Chapter VII of the Charter to compensate for a vacuum created by the departure of ECOMOG, the West African regional peacekeeping force. Member States failed to contribute the means, particularly increases in military personnel, for UNAMSIL to fulfil its expanded mandate and to deter aggression. The RUF, whose desire for control of natural resources may exceed its commitment to peace, undoubtedly has taken advantage of UNAMSIL's limitations to keep control of valuable diamond mining areas that have fueled the banditry of the conflict.

What is the cost of failure in Sierra Leone? With fighters already primed by earlier stages of intense barbarity, we can expect the murder and mutilation of civilians on an unprecedented scale. Massive numbers of displaced persons and refugees will overwhelm neighboring countries requiring a dramatic increase in the need for international humanitarian assistance. Failure by the international community in Sierra Leone will also have a serious impact on the broader efforts of the United Nations to resolve conflicts in other areas of Africa. A resurgence of factional control in Sierra Leone will further destabilize an already fragile West Africa. The United States, with democracy and human rights as cornerstones of its policy on Africa, will have its stature diminished if it fails to fully support the peace process it has promoted for Sierra Leone.

The consequences of failure in Sierra Leone justify a robust course of action by the Unites States that leads, first and foremost, to the restoration of security in Sierra Leone and then a strengthening of the Lome Accords. We urge you to take the following actions to achieve these objectives.

1. Enhance Troop Levels and Peacekeeping Capabilities. We believe that the United States, with no troops on the ground, has a special obligation to provide strong financial and logistical support urgently needed to transform UNAMSIL into a more effective peacekeeping force and deterrent. Not only should the United States assist other governments to fulfill current troop commitments to UNAMSIL, but it should offer substantial support for the expansion of UNAMSIL beyond the 11,100 military personnel now permitted under its mandate. In view of the urgency of the crisis the Administration should continue to use its drawdown authority as needed to provide logistical support to UNAMSIL until other funds can be allocated from the budget.

2. Swiftly Develop Consensus on an Effective Assistance Package. Firm, substantial and timely commitments of support beyond your "drawdown" authority should back the commitment of the United States to peace in Sierra Leone. Your leadership and personal intervention with the leaders of the United States Congress are vital to the development of an effective assistance package. A logical starting point is to seek the release of the "hold" in the Senate of the ninety-six million dollars that is the United States' assessed contribution for peacekeeping in Sierra Leone. We also encourage you to actively promote passage by the U.S. Senate of the Sierra Leone Peace Support Act of 2000, passed by the House of Representatives on May 3 and referred to the Senate Committee on Foreign Relations. This legislation will provide funding for the disarmament, demobilization and reintegration of combatants and for a truth and reconciliation process in Sierra Leone.

3. Support Regional Peacekeeping Forces. The United States should encourage and support the accelerated contribution of troops from ECOWAS member states preferably as a component of UNAMSIL. Alternatively, if these forces compose a separate regional peacekeeping force, they should have a command and control system that is closely coordinated with UNAMSIL and monitored to ensure the observation of human rights by military personnel.

4. Protect Civilians. The United States should seek the strengthening of UNAMSIL's mandate, as amended by the U.N. Security Council on February 7, 2000, to give peacekeepers a clear duty to protect civilians, and identify, apprehend and detain violators of international laws of war and crimes against inhumanity.

5. Prevent External Support of Rebel Factions. The United States should take steps, including the imposition of international sanctions, against any government that is providing direct support to a warring faction in Sierra Leone or facilitating their trade of natural resources in contravention of Article VII, Section 6 of the Peace Agreement.

6. Give High Level Diplomatic Attention. We understand that you have dispatched Rev. Jesse Jackson, your Special Envoy for Africa, to West Africa. Rev. Jackson should deliver a firm message to the President of Liberia that the United States will no longer tolerate his support of the RUF. A visit to the region by Secretary of State Albright should closely follow Rev. Jackson's mission.

7. Appoint a Special Envoy A Special Envoy whose sole mission is to help resolve this crisis should be appointed as soon as possible.

Your leadership had a direct impact on resolving conflict and threats to the peace in Bosnia and Kosovo. Your intervention is now critical to focusing international attention and resources on bringing Sierra Leone's misery to an end. We hope that you make peace in Sierra Leone part of your legacy.

John Kucij
Chairman of the Board
Friends of Liberia

Friends of Sierra Leone (FOSL) is a US-based voluntary, not-for-profit organization dedicated to serving Sierra Leone. FOSL is non-political and supports all of Sierra Leone, regardless of ethnicity or region.

FOSL was founded by returned Peace Corps volunteers who had served in Sierra Leone in an effort to share news about Sierra Leone, and find ways in which they could contribute to the development of the country they served.

FOSL's relief and development assistance is designed to respond to Sierra Leone's changing needs. Between 1991 & 1999, FOSL sponsored over six million dollars of relief and medical materials to aid refugees and displaced Sierra Leoneans - victims of a protracted rebel war.

Funding for FOSL's development & relief projects comes from membership dues and donations from individual and/or group supporters. As a 501(c) (3) voluntary organization, FOSL members perform all tasks without pay.

Friends of Liberia (FOL) is dedicated to helping Liberians achieve peace, democracy and the reconstruction of their nation. The thirteen- year old organization, with the support of our 800 members, has conducted fact-finding missions, provided relief and medical assistance, implemented community-based reconstruction projects, trained Liberian teachers, built the capacity of Liberian nongovernmental organizations (NGOs), brought representatives of warring factions together in public forums and conflict resolution workshops, and advocated for effective policies on Liberia. Friends of Liberia's 34-member delegation observed the July 1997 election in Liberia.

Friends of Liberia is a tax exempt 501(c)(3) non-profit organization that is recognized and registered by the U.S. Agency for International Development as a private voluntary organization (PVO). We are a member of InterAction, the association of international humanitarian organizations, and affiliated with the National Peace Corps Association.

hey all you people out there, i have taken a strange liking to diamonds, while looking them up on the net i have only now realized that there are so many valuable countries out there that with help could really strive on the economic tables.....
with this help, so many poor and starving people could be helped and the standard of living could be raised by a conciderate amount.....

I am trying to locate Clancie Freeman, who used to work as a Peace Corps Volunteer in Kabala-Sierra Leone.1970
She was in the group of Joyce Cain, Ruth (?)etc
If any one could assist me getting in touch with her, I will be grateful