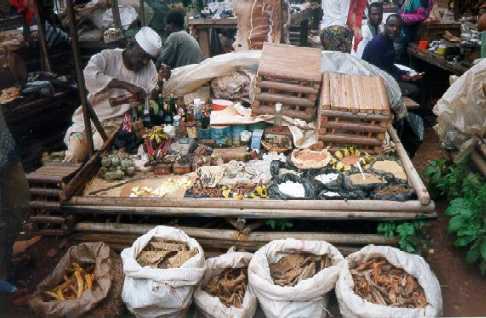 Mamfé Friday, October 9, 1998 This week was fine. Monday was International Day of the Teacher. I didn't really enjoy the festivities - lots of standing around, but I was obliged to go and I guess it was better than sitting at home. The Divisional Delegate was about 1.5 hours late; when he finally arrived by car (his office was 50 feet away), he gave a short speech about teachers. I played tug of war. My team won - go us. We also marched through town. Some people took pictures of me - I'm a celebrity. At the town football field, I sat in the shade and talked with Rudolf Ambe. Afterwards, I had drinks and food with the other teachers. Some of them got a little tipsy.

My sentences in this entry are very boring - I guess that is because not much is happening. My week was quite normal - teaching, lesson plans, yelling at students, French lessons. I felt a little sick on Wed - I feared a return of giardia. I'm better now.

I did not go to Ebeagwa. I would have liked to go to the party, but it rained a lot this week. Braving the horrid roads wasn't worth it. I do have lots to do this weekend. Lesson plans, homework to grade. I made a very anal class roster/grade sheet today. I'm anal compulsive, but it killed a morning. This afternoon, I wanted to watch CNN at the Data. They had the Dubai TV station and radio on. I was a little annoyed. Oh well. Heard a story about Fort Worth on VOA. Felt a little homesick. This evening, work, French, and reading. Mamfé Sunday, October 11, 1998 Yesterday, I went to the market. It rained sporadically throughout the day, but I was fortunate and was able to shop in between showers. I'm getting to know certain vendors. The gari lady always gives me a huge dash, so I plan to visit her whenever I need gari. I have lots of fun joking with the egg ladies. The sell the same things and sit next to each other. I try to rotate whom I buy from, but sometimes I forget. Then they argue about whose turn it is to have me as their customer. They aren't very honest, but they are amusing. For dinner, I had fish, rice, and carrots. Yum.

I spent a lot of time preparing lessons for this week. It took a long time to make prisms and cylinders of various sizes, but it was kind of fun.

This morning, I didn't go to church. The only thing I like is the music, and I hate sitting in church for 3+ hours. I'll go occasionally. Instead, I prepared a lesson and went for a walk around town. I was gone much longer than I intended - 2 hours - but I saw some cool things and took lot of pictures. I found a huge bridge that spans the Manyu - the river is quite beautiful, esp. with the rainforest sloping toward the shore. Too bad it is not primary growth. While standing on the bridge overlooking the river, I had a "wow, I'm in Africa" moment. I also took pictures of the roads, the "gas station", and the school. It was difficult to be furtive with taking pictures - I know I look weird, and people might think I am a spy. I got a little burned.

This afternoon: reading, lesson plans, clarinet, French, letters. Whee. Garoua Friday, February 4, 2000 5:40 AM It's 5:40 AM. I've been up for more than an hour b/c I had one of the more traumatic experiences of my PC career. This morning around 4 or 4:15 the call to prayer woke me up as usual, and as usual, I had to pee. So I put on my flip-flops and went outside to my latrine. On the wall of the latrine I had leaned the small broken door for the toilet, and behind that door I saw the BIGGEST rat I have ever seen. The thing was fucking huge. I didn't see the whole body b/c it was "hiding", but I saw the back half and its tail, which must have been 30 - 40 cm long (I just looked at a ruler - when it is light and safe, I'll make measurements from my scarred memory to have a better idea). Anyway, I saw the rat and thought, "do I really have to pee? Maybe it will stay behind the door." As I advanced, the rat decided to flee. It headed for the traditional kitchen, and I was in the way. I didn't stay to see how big it really was. Also, my door was open and I rushed to close the door so the monster wouldn't take refuge in my house. Basically, I ran away from a rat. I stubbed and bloodied my toe in the process. After peeing, I was quite shaken up. With the call to prayer and chickens continuing, it was impossible to go back to sleep. So here I am. Garoua Friday, February 4, 2000 10:00 PM I gorged myself on fish this evening. It was really good, and I savor street food moments. I guess if I knew the agros better I would have had more fun, but I still had a good time. I was quite unsettled when the scraps were given to the street kids. Not because our leftovers were made a meal, but b/c the kids acted too much like dogs - one would grab a big piece and run away, others would follow. Very dehumanizing. I really do live in an unequal world. Garoua Tuesday, February 8, 2000 On Sunday I dicked around my house in the morning and then went to the Case to write lesson plans. I have all the bacteria plans done, so I should be set for ~ 2 weeks. Amadou came in w/ mail - I got a care package from mom. She sent 2 bags of microwave popcorn - I guess she really has no clue what things are like over here. It is both funny and frustrating. I appreciated the huge bag of peanut M&M's, though.

Things sound the same in Mamfe.. I was a volunteer there in 65-67. My wife taught at Okoyong and I worked on road projects. I lived across the street from the Mamfe rest house and spent most nights at the "officers club" overlooking the river.

Things do, indeed, sound the same in Mamfe! I was a volunteer in Besongabang 89-91 and did some shopping in Mamfe. The officers club was still there, but not much of a hang-out--pretty done in. The old German bridges were still passable at that time, I wonder if they are now? The new bridge over the Manyu had just been built before I arrived--it was a big, two-lane bridge that went exactly no where. Is there a road now?

please i'll appreciate if u can send me some hints about mamfe.the level of educ and also the dev't i'll appreciate ur effort.and also recent photo's with an inside infor of ur organisation
;

am verry happy a site like this exist
am from mamfe and i have seen some gradual changes in the place for the past 3 years. i lived directly opposite crtv and am use to the town it really has changed into a modern city and its realy clean we just need to maintain the situation and improve on the development going on
from stanley tabot
4 my people

am verry happy a site like this exist
am from mamfe and i have seen some gradual changes in the place for the past 3 years. i lived directly opposite crtv and am use to the town it really has changed into a modern city and its realy clean we just need to maintain the situation and improve on the development going on
from stanley tabot
4 my people

Goodday,
I WOULD LIKE TO KNOW MORE ABOUT MUSICIANS WITH VIDEOS, DVD, CD FROM MANYU DIVISION. Anybody who can share this information should email me at:
emmanuelegbeegbeemmanuel@yahoo.com.
where to buy them should alsö be provided.
Thank you,
DADDY BAAJCAM

Hi! Happy to find such a website about Mamfé where i lived between October 1986 and May 1988. I was the Site Manager for the construction of the new bridge, woirking for the French company Satom. A bit proud of this bridge which constituted a good professional experience for me . Life in mamfé was a bit difficult at the beginning but then found very good friends there who had welcome me very well.

Hi! Happy to find such a website about Mamfé where i lived between October 1986 and May 1988. I was the Site Manager for the construction of the new bridge, woirking for the French company Satom. A bit proud of this bridge which constituted a good professional experience for me . Life in mamfé was a bit difficult at the beginning but then found very good friends there who had welcome me very well.

Hi - I spent the years 1979 - 1983 in Mamfe and even got my wife from there. I was involved in Community Development work mainly building all those village water supplies in the area. I loved the place very much and hope to pay a visit once again. Lake Ejagham was my most favorite place.

Mamfe...Wao!!!That's my city men! It's all about me and what i go na do for Mamfe.Bieng Abroad since early 1990s makes me sick once i read things like bad roads,poor hospital beds,poor hotels ;just to name but a few.In fact i am very touched and proad of my place and MAMFE tought me a lot;if i could recall those heptic days of my upbringing from gov't primary school in small Mamfe to St Anthony,via the corridors of Gov't High School Mamfe taking the beatings from emblematic principals like Mr.MBAKE.
Ah!! you can't imagine what i went through in one of the most flambouant lives on this planet.I saw it all. Yes, I use to live in Banso Quarters or call it Y'de Quarters etc.. I saw pop senegary and then paradisco and all the likes you can imagine.The streets of mamfe with my crew and how this all sums me to the man i am now ; thus VICTOR is my birth name and then comes my last question to all of us making either stories about passages in Mamfe..

I COME FROM MAMFE ...I HAVE BEEN TO PLACES ..BUT JUST ASK YOUR SELF WHAT HAVE I DONE FOR MAMFE? YES!!DON'T EXPECT MIRACLES ...IS THE SAME OLD RAP SHEET WITH ALL THE RICHES MAMFE HAVE PRODUCED IN HUMAN NATURE WITH THE LIKES OF DOCTORS,MINISTERS,AMBASSADORS AND GOVERNORS.WHAT HAVE YOU DONE FOR MAMFE?....THAT'S THE REAL HISTORY IN THE MAKING..LETS BE REAL AND FACE IT NOW FOR EVER.I LIVE FOR MAMFE AND COMES TOMORROW MY ACTIONS WILL JUDGE ME.TOGETHER WE BUILD AND STAND FOR EVER FOLKS...I AM COMING MAMFE.I GOT PLANS!~!..watch out things will change and i know i will proudly fly from Mamfe International Airport...yes man!!You feel me..It's action not words...!
Thanks..

If you are touched by the above well;make me feel you :deltapro118@hotmail.com

THIS IS OGBAA N. KALU. MAMFE TOWN IS THE PLACE I GREW UP.I AM NOW IN LAGOS NIGERIA.I WISH I CAN GET IN CONTACT WITH MY FRIENDS AT P.S.S. BESONGABANG.I WAS THE EDUCATION PREFECT FOR 1992 SCHOOL YEAR.MY EMAIL IS ogbaa1@yahoo.com. telephone number is 234-8056711581. email or call me. cheers

I miss my home town so much,i will appreciate if u give me info about the town and the dev't.hope to be there shortly.LOVE THE MAMFE COMMUNITY.