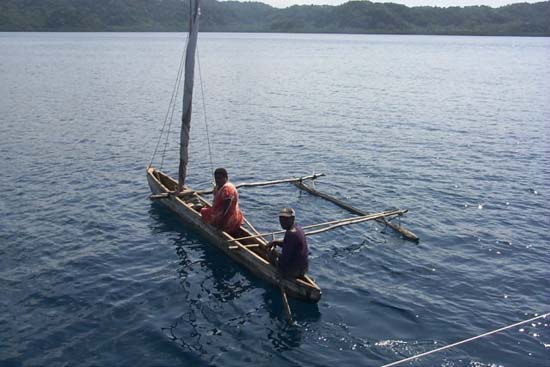 Problems arose when the young people of the villages left for the cities, completely unprepared to survive in a nontraditional environment. Without money, education or skills, they often turned to crime and drugs. So Kane and other volunteers worked to teach them mechanics, construction, sewing and business skills that they could use to get jobs in the cities or better yet, to establish small businesses in their villages.

From the South Pacific to Alaska, Milwaukee native takes on the world

of The Chronicle staff

Former Milwaukeean Adam Kane showed his adventurousness, self-reliance and passion for exploration long before leaving Milwaukee for college at Minnesota State University-Mankato, serving in the Peace Corps in Vanuatu and traveling the continents of Australia, Asia and South America.
Adam Kane in Dillingham, Alaska

In a recent telephone interview from Dillingham, Alaska, where Kane, 28, now lives and works as a radio news broadcaster for the National Public Radio affiliate KDLG, he told The Chronicle how his journey began with cars.

The day Kane got his driver’s license, at age 16, he went out to look for a job. Driving up Port Washington Rd., he went job-hunting by stopping in business after business.

“I went to a veterinary clinic and I went to a hotel, And I went to a locksmith store, and I went to whatever, but I don’t like restaurants really and I don’t like clothing and retail stores, so I went into an oil change place.” Kane asked the owner if he was hiring and the owner said, “‘You have to be 16 to work here,’ and I said, ‘That’s good ’cause I’m 16.’ And he said, ‘If you’re really 16, you’ve got the job’ and I was, so I ended up working there for two and a half years.”
Kane with a penguin on the beach in Punta Tumbo, Argentina.

Kane with a penguin on the beach in Punta Tumbo, Argentina.

That spirit of moving down the road and looking for what interests him stayed with Kane during his college years, when road trips led him to cross the United States seven times.

After graduating from college with a degree in automotive engineering technology in December 2002, Kane said he was ready to go outside of the U.S. and continue his explorations. Uneasy with his unstructured plan to travel and get part-time jobs, his parents suggested that he apply to volunteer with the Peace Corps.

Eight months later, after many more American road trips, Kane was accepted into the Peace Corps and given the choice of the South Pacific island country of Vanuatu or an assignment in Africa. He chose the “island paradise” and, in October 2003, he left the U.S. for a two-year stint in the Third World.

Kane who lived in a village of about 100 people, worked teaching mechanics to young people age 13-22. Though he said he felt, at first, that he wasn’t really helping them, with time many insights emerged.

Though the people of Vanuatu grow the food they need and are not dying from any diseases, Kane explained, they don’t have education or infrastructure or “the state of mind to think about the future.”

Problems arose when the young people of the villages left for the cities, completely unprepared to survive in a nontraditional environment. Without money, education or skills, they often turned to crime and drugs. So Kane and other volunteers worked to teach them mechanics, construction, sewing and business skills that they could use to get jobs in the cities or better yet, to establish small businesses in their villages.

And though he had a few dedicated students who took what he had to say to heart and used it to develop their skills, Kane said, for the most part, he felt that he learned more from his students and from living in such a radically different and simpler environment.

Not within a day’s walk of another foreign volunteer, Kane spent a lot of time alone. Though he developed friendships with his students, the villagers who were his contemporaries were married and living traditional adult lives. Being alone opened his eyes in many ways.

That solitude “gave me a lot of a chance to meditate on a lot of things the whole time I was there,” Kane said. For one thing, he learned to notice his physical state.

“When you get a cold you really feel when it starts and when it ends,” he said. “When you have nothing else to do, you know when you’re hungry and when you’re tired. You really start to feel things you hadn’t noticed before.”

After completing his Peace Corps service, Kane was not ready to return to Milwaukee. Though his friends were applying to graduate school, he was still driven to see the world.

Cashing in his airline ticket home and the unused portion of his Peace Corps living allowance, he bought a ticket to Australia.

“I went to Brisbane, Sydney, Melbourne, Tazmania, Adelaide and Perth. Then the cheapest ticket from there was to Singapore, so I went there. And then, from there, I went to Malaysia, Indonesia, Thailand, Laos, Cambodia, China, Korea to Japan, then back to Thailand and India.”

Several times during the three years, when he ran low on funds, Kane found jobs back in the American Midwest through the Internet. Returning to work as a camp counselor or to guide American students on a trip to Panama, Kane earned enough to continue traveling.

The work that took him to Panama led him on a journey around South America, including visits to Colombia, Ecuador, the Galapagos Islands, Peru, Bolivia, Chile and Argentina.

Traveling as inexpensively as possible, spending just a few dollars a day for room and board, he saw many of the world’s great sights and met natives of many lands as well as fellow travelers from many countries.

Though Kane said he doesn’t feel he took much away from his religious education at a local Reform congregation, he repeatedly connected with traveling Israelis — and was mistaken for an Israeli. He said he enjoyed and felt a bond of kinship with them.

In April this year, through a series of misconnections, Kane found himself with an airline ticket home from Peru and no job. Back in Milwaukee and unable to find a good job here, he looked on the NPR Web site. With some experience working at his college’s radio station, he applied for the job he now holds in Dillingham.

“I sent in my application to Alaska and a few minutes after getting my application they called me. They had more qualified applicants, but didn’t think the others would do as well as I would in Dillingham. Because of that they hired me,” he said.

Though he’s back in the U.S., Kane is still learning about far-away places and people. With a population of about 50 percent native people and summer days when the sun never sets, there are plenty of new realities to explore in Dillingham.

Kane had a brush with the national media in August when he checked into rumors that Alaska Gov. Sarah Palin had been tapped as Republican presidential candidate John McCain’s running mate. E-mailing NPR, he inquired whether the rumor was true and noted that he was writing from Todd Palin’s hometown.

Though Kane did not get an opportunity to go on the air nationally at that time, he thinks that he may one day pursue a career as a foreign correspondent.

For now, however, he plans to stay in Dillingham and continue to experience the wild edges of the U.S.

This story has been posted in the following forums: : Headlines; COS - Vanuatu