Ann Richardsĺ next adventure will be the Peace Corps, in Romania 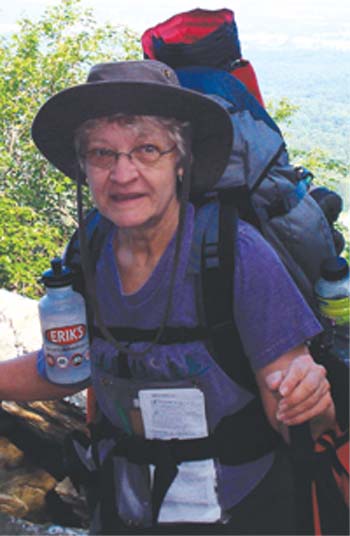 In February she leaves for Romania, where she'll train for three months and then plunge into assisting Romanians in business development. "I'll be working with small entrepreneurs on basics like how to set up a customer service department ... how do you work with, train, motivate employees." But along with the nuts and bolts, she hopes to help show Romanians that all U.S. citizens aren't "war-mongering, 'Ugly Americans.'" And as for her plans after she completes her 27-month stint in Romania? The wide grin on her face betrays the answer before the words tumble out of Richards' mouth. "I'm completely open. That's one of the most exciting things. I haven't even thought of that. I won't be tied to anything ... "I have complete freedom."

Ann Richardsĺ next adventure will be the Peace Corps, in Romania

Profile: Ann Richardsĺ next adventure: the Peace Corps, in Romania

Caption: Fulfilling a longtime dream, Ann Richards hiked 587 miles of the 2,000-mile Appalachian Trail in the summer of 2007. "I came alive there [at Metro State]. It was a perfect fit for me. The degree changed my life-not my work life, it just opened doors in my own mind." - Ann Richards

She is a person who likes to think things through. Even after Ann Richards has made a decision, she turns it over in her mind, examining it from different angles, making sure it's the right one for her, deciding how she'll implement it. But that doesn't mean that every decision is a long time coming. Take, for example, her retirement last May. "It was a spur-of-the-moment decision," said Richards, who's 63. "I had been in my job for 18 months. I'd planned to stay for four or five years. But there was too much travel (she had a seven-state sales territory), and I had a lot of time to think as I drove. I asked myself, 'Well, what do I really want to do?'

"I decided to check out the Peace Corps," Richards said. She had long been fascinated by the idea of the Peace Corps-serving was something she'd thought about since President Kennedy established the program in 1961. "I don't think there were many of us who didn't think it was something we wanted to do," she said. "But life got in the way."

'Just something you did'
Service to others was imprinted on Richards at an early age. She grew up one of 10 children-she and her twin sister were the oldest girls -in a close-knit Minnesota family, living in various small towns as her father's job with People's Natural Gas dictated. "My mother was very involved in our community," Richards said. "It was a big part of our growing up. I don't remember a lot of talking about it, it was just something you did." She remembers her mother, who died last year at age 88, as "an organizer and a fund raiser ... she involved a lot of people in volunteer work she deemed worthy."

As teens, Richards and her twin sister loved to come to Minneapolis on the Greyhound. It seemed natural for Richards to settle in Minneapolis after she graduated from high school. "My senior year, we lived in Preston, and I didn't feel connected to the area. Minneapolis was our Mecca."

Richards worked a variety of what she called "dead-end jobs" in her youth, including one as a page at the Minnesota Legislature. That job wasn't a total loss: Richards was very interested in politics ("I worked very hard for the Republican Party until, around 1982, I woke up and smelled the coffee and switched to the DFL"). And it was at the state Capitol that she met her late husband, John, who worked as a journal clerk. "We met during the session and married at the end of it," she recalled.

Working woman
The young couple traveled out west, living in Denver and San Francisco "because we could." They settled back in Minnesota after their son Jess, Richards' only child, was born in 1970. "I always worked," Richards said. One of her favorite jobs was as operations manager for Fingerhut, the St. Cloud-based mail order company. "It was a wonderful experience," Richards said. "I got to hire lots of women ... I could hire people who'd never worked, people who really needed a job. I got to see women turn their lives around, become self-supporting. For a lot of women, this was the first time they'd had benefits. For someone who's had a tough life, never thought they'd own something ... [through profit sharing] they got to own a little piece of the company."

It was while she was living outside Becker, Minn., and working for Fingerhut that Richards became involved with Business and Professional Women (BPW), the national organization whose mission is achieving equity for women in the workplace. She enjoyed lobbying for family leave, and worked on issues like child care, pay equity and comparable worth. "I was the local president at one point, and served on the state board."

After leaving Fingerhut, Richards went to work for the Sportman's Guide, setting up and managing the customer service department. "They were a macho men's company, just going public, and they used to brag they were running by the seat of their pants." She spoke with some amusement about the posturing of "Macho men in the front office ... the department heads had to get the work done. We were in their background, we had to roll up our sleeves. But this was my introduction to working with other department heads, both men and women, who worked together and really supported each other. It was tremendous. We had a great deal of freedom."

Life changes
It was while at the Sportman's Guide that Richards and her husband started a business distributing used books that eventually evolved, for a while, into a used bookstore. She went on to work at the Monticello Times in advertising sales, and decided what she really wanted was to go back to school and complete her bachelor's degree. It was a time of great change in her life. Her son was now a college student, too, and Richards knew she'd need help, especially since she and her husband had decided to separate, though they remained close. "We were better friends than spouses," she said. Luckily, her new job in customer sales support management at Dex offered some flexibility in her schedule and tuition reimbursement.

Richards enrolled at Metro State, completing a degree in social science. "I came alive there," she said. "It was a perfect fit for me. The degree changed my life-not my work life, it just opened doors in my own mind." Richards and her son graduated from college at the same time.

Along the way, life kept happening. Richards' husband died after a six-month battle with cancer. She was laid off from Dex and went to work for a year at the Minnesota Women's Press in ad sales. In between, she nurtured her interest in hiking, twice traveling to England for hiking trips. It never bothered Richards to travel alone. "My mother encouraged us all to be self-reliant," she said. "I have a strong independent streak."

The Appalachian Trail and beyond
That independent streak served Richards well last summer, when she spent eight weeks by herself, hiking 587 miles of the 2,000-mile Appalachian Trail. "It was incredibly physically taxing, but my body was up to it," she said. "I carried a journal and had a lot of time to read and think," Richards said. "I had made the decision to enter the Peace Corps, but I wanted to really think it through."

Richards described her Appalachian Trail trek as a "wonderful experience ... I've had big blocks of solitude. That precious time when you reflect, resolve, and then completely empty your mind and just flow with the current. I've met the nicest bunch of hikers of all ages and backgrounds." One disappointment, Richards said, was "there were so few women my age hiking."

Among the things on her mind as Richards hiked: She was about to become a grandmother for the first time; how would she live thousands of miles away and yet be close to her grandchild? (Answer: email, laptops and web cams) And what would she do with all of her stuff? She had recently sold her house in northeast Minneapolis to Jess and his wife, Erin, but still owned furniture and all of the usual accoutrements one gathers throughout life. And she had a number of what she referred to as "collections, some bizarre, that were meaningless to anyone else," that included more than 100 planters with a turkey theme and many, many hats.

She decided, as she walked, that she would get rid of most everything she owned-just give it all away-a decision she described as very freeing. She's keeping some clothes, a few books, some quilting supplies, and about 30 hats.

And in February she leaves for Romania, where she'll train for three months and then plunge into assisting Romanians in business development. "I'll be working with small entrepreneurs on basics like how to set up a customer service department ... how do you work with, train, motivate employees." But along with the nuts and bolts, she hopes to help show Romanians that all U.S. citizens aren't "war-mongering, 'Ugly Americans.'"

And as for her plans after she completes her 27-month stint in Romania? The wide grin on her face betrays the answer before the words tumble out of Richards' mouth. "I'm completely open. That's one of the most exciting things. I haven't even thought of that. I won't be tied to anything ...

"I have complete freedom."


The profile appears in every issue of the Minnesota Women's Press. It reflects our founding principle and guiding philosophy that every woman has a story. Readers are welcome to submit suggestions for profile subjects.

This story has been posted in the following forums: : Headlines; COS - Romania; Older Volunteers