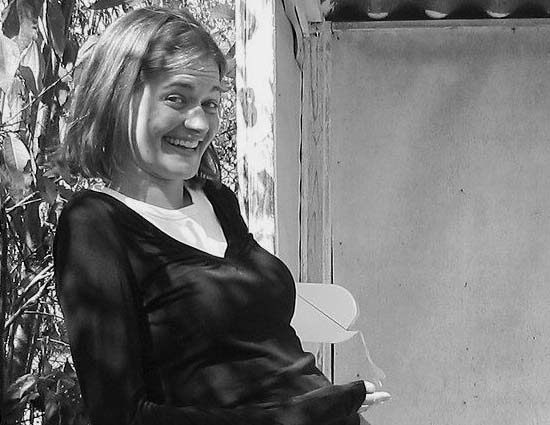 "Traveling gives one new perspectives and opens horizons," she said. "Working abroad is an entirely new story and challenge. Since I run marathons for fun, I knew I was ready for an even greater challenge. The Peace Corps seemed like the perfect choice for a new challenge beyond 26.2 miles." Joining the Peace Corps, she found, was a long and complicated process. The independent federal agency thoroughly screens thousands of applicants every year and chooses only those who appear to have what it takes to live in a foreign country and interact with people of different cultures and religion.

Who trades a Manhattan apartment and all the comforts of the USA for an outhouse, cold showers and no cell phone?

Peace Corps volunteer Michelle Miller, of Freehold Township, did just that during her two-year assignment in Moldova.

"I had a great job, a BlackBerry, a window office as a legal recruitment assistant manager in New York City - I loved every minute of it, but one day I was walking through a New York City street fair and saw the Peace Corps booth," said Miller, who finished her assignment and returned to the States in November. "I spent about an hour talking to a former Peace Corps volunteer who had just returned from Ukraine. With my groceries in hand, I thought, 'That would be really cool.' "

She said her parents, Judy and Terry Miller, always encouraged her to reach for the stars. This time, she said, the stars were in Moldova, a poor Eastern European country adjacent to Ukraine and Romania.

One of Peace Corps volunteer Michelle Miller's least favorite aspects of her service in Moldova was a trip to the outhouse, especially in the snow.
Her older brother Brian's sojourn to Abu Dahbi when he was a student at Haverford College paved the way for her desire to see the world, she said.

"Without him, I probably wouldn't even have a passport," Miller said about her older sibling, a 1994 Christian Brothers Academy graduate whom she credits for inspiring her passion for track and cross country.

"Traveling gives one new perspectives and opens horizons," she said. "Working abroad is an entirely new story and challenge. Since I run marathons for fun, I knew I was ready for an even greater challenge. The Peace Corps seemed like the perfect choice for a new challenge beyond 26.2 miles."

Joining the Peace Corps, she found, was a long and complicated process. The independent federal agency thoroughly screens thousands of applicants every year and chooses only those who appear to have what it takes to live in a foreign country and interact with people of different cultures and religion.

She turned down her first invitation to the country of Georgia, going with a "gut feeling," but when the second invitation arrived, her first instinct was to phone her favorite world traveler.

"I called my brother and said, 'Moldova … what do you know?' Of course, Brian, the world traveler, knew its approximate location. I knew if Brian thought this was 'cool'and was on my side, that this was something I could do."

Miller then entered an intensive nine-week training in the Ialoveni district in Moldova on Sept. 13, 2006, spending 341 hours learning the Romanian language, and more than 100 hours focusing on cultural integration and professional training.

Her assignment was in Cahul, Moldova, one of the larger cities in the country, yet still rural in nature. She lived with Iulia Tatu, a professor who taught pedagogy, (elementary and preschool education) to students at State University of Cahul.

"We had a monthly stipend for food, rent and traveling. I basically gave the majority of that to my host mom, 'Mama Gazda,' because she was amazingly wonderful and became my second mother," Miller said. "We also received 24 U.S. dollars a month for traveling outside Moldova. Outside of Moldova, however, that didn't go very far. The sad thing was that we are supposed to live like Moldovans, but the average Moldovan makes one-fifth of what the Moldova Peace Corps volunteer receives; this is largely because we are given money to purchase the fresh fruits and vegetables in the winter, whereas Moldovans would usually use preserved items from their gardens."

Besides a dramatic decrease in income, Miller would have to make quite a few other adjustments:

• Cold - "My host mom did an amazing job of heating the soba [stove] in our house - putting my feet in hot water with salt - making hot wine - but central heating is central heating, and Moldova did not possess this luxury. Not to mention that gas and water prices cost well over half the average Moldovan's salary. It's also not fun to go to the outhouse at midnight after it has just snowed."

• Power - "I went without power and water for three weeks my first winter in Moldova. It was a long January, but at the same time it was an incredible opportunity to bond with my host mom. She is a strong woman who overcame an unfortunate past. I was a good volunteer because of her."

• Streetlights - "While I love Moldova, it lacks the infrastructure Americans take for granted. Thus, my father sent about 10 flashlights. There were no streetlights, and it gets pretty dark."

• Mud - "I lived in a city [Cahul] where the majority of roads were dirt. My shoes will never be the same, but at the same time, my hour walk to work every day was a time to reflect and enjoy Moldova's beauty."

• Dogs - "Dogs are not household animals in Moldova. They are kept outside on leashes about 1-3 feet and fed for the most part only bread and sometimes water. It broke my heart."

Her own hardships paled, however, in light of what the Moldovan people experience.

Home ownership is a difficult process, she said. "Americans can get funding to buy a house; Moldovans can't. If they want a house, someone in the family must go abroad, usually to Western Europe, and work. Trained doctors went to Italy as housekeepers."

The extreme poverty also forces many parents to abandon their children: "They have no other choice," she said.

In addition, domestic violence is a big problem, with statistics showing that 27 percent of Moldovan women are victims.

Despite the numerous hardships and challenges, the people themselves are "amazing," Miller said. Moldovans, most of whom speak Russian, although the official language is Romanian, "would give you their house and sleep outside," Miller said. "They are caring, wonderful, extremely hardworking and generous. They want to see the world but can't. They care about presentation and wonder if all Americans wear flip-flops and torn jeans."

Besides its people, one of Moldova's greatest assets is its lush countryside, Miller said.

"Moldova is covered with grapes and sunflowers," Miller said. "Anything can grow in Moldovan soil and it does - I had my very own organic farm for two years. However, the buildings outside the capital city are typical Soviet Union style and are now falling apart because there is no money for their upkeep. Moldova needs investments, but countries are skeptical of the government. Any Moldovan would admit to your face that the government is corrupt and bribes are the only way to get things done. The Peace Corps tries to show another way."

Her primary assignment was with the Association of Single Parent Families (ASPF), which aims to support, protect and promote the rights of women and children in the Cahul region through social marketing campaigns and instructional seminars. Her main responsibilities were to assist the ASPF with organizational development, project promotion, community outreach and volunteer recruitment. Under her guidance, the ASPF experienced much success, including a 300 percent increase in the organization's total operating budget.

"I raised a total of $74,000 in grant money, never having written a grant before in my life," Miller said, adding that the grantors included the U.S. Embassy in Moldova, the British charity BEARR Trust, the Black Sea Foundation, and Mama Cash, an international, women's fund based in the Netherlands.

She also co-created and co-directed six community development projects in Cahul and the surrounding rural villages.

One of the things she is most proud of is the women's empowerment camp (TARE: Active, Responsible, Equal Youth) she directed for two summers. She helped 140 young women ages 17-22 realize their professional and personal talents.

"With so many women victims of domestic violence, this national summer seminar series is essential," Miller said. "We had events ranging from an American Fourth of July party to a domestic vigil to a talent showcase. It's really the only time women can do something for themselves."

And the results were tangible and rewarding.

"After our women's empowerment camp in 2008, one of our campers decided to implement an informational Breast Cancer Week campaign full of activities for her entire raion center. A raion would be like the size of a county. Moldovans believe in numerous superstitions that cause breast cancer. There is little to no education on this horrible disease, not to mention women in poor villages have no access to proper treatment. Women in the south of Moldova had to travel to Cahul to pay 30 U.S. dollars to have a mammogram. It's horrible, when [you realize] the average Moldovan makes less than 100 U.S. dollars a month."

Miller takes great pride that she became a trailblazer for the women of Moldova.

"During my women's week march, an elderly man said out loud, 'What has the crazy American girl gone and done now?' " she recalled. "Along with my counterparts, I saw the women in the Association of Single Parent Families change and become more empowered over the two years. 'Vica' opened her own youth organization. 'Valentina' got a new, high-paying job. Since the average Moldovan gets married well before the age of 20, I was an outcast — an outcast who became accepted and at times admired."

Many young people are leaving Moldova, she said, because "there are poor job opportunities and the jobs that exist do not pay enough to support a family."

When her organization's center (where Miller's office was located) was in jeopardy of closing, the volunteers even took on the president of the raion.

"I met with him personally, along with the entire team, and we convinced him it would be detrimental to his constituents."

Other memorable experiences include dancing on stage in front of the Bulgarian ambassador and introducing a few American customs.

"I have made Moldovan men shake my hand," Miller said, noting that shaking hands with a woman is a foreign concept.

Even though her host mom made her feel like a daughter, there were many times when she missed her family and country.

"Volunteers are on 'lockdown' for the first three months and last three months of service," she explained. "My first Christmas away from home was rather difficult, but several volunteers and I rented an apartment in the capital city and made lasagna via toaster oven, watched 'Love Actually,' and just remembered we were here for a much greater purpose."

Having spent two years educating women and young people, helping them to gain selfconfidence and independence, Miller is now embarking on the next phase of her life.

She is applying to graduate schools to pursue an MBA, and then it will be time to seek new challenges.

This story has been posted in the following forums: : Headlines; COS - Moldova; Women's Issues; Youth