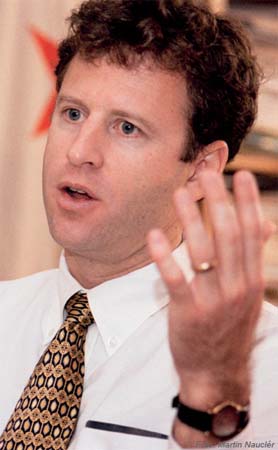 Having just returned from a trip to the country arranged by the top American commander there, Gen. Ray Odierno, we agree that Iraq continues to make tremendous strides, thanks to American assistance and, increasingly, the efforts of Iraqi politicians and security forces. But both those ready to dust off the infamous "Mission Accomplished" banner and declare victory and those who continue to see Iraq as an inherent disaster that must simply be abandoned have to realize that continued American involvement will be crucial for several more years. Michael O'Hanlon, a Senior Fellow at the Brookings Institute and a Visiting Lecturer at Princeton University, served as a Peace Corps Volunteer in Congo Kinshasa.

THE Iraq war isn't over. And while President Obama's apparent decision to withdraw the bulk of American troops by August 2010 is not necessarily a mistake, it cannot be carried out rigidly. If all continues to go well, it should be eminently feasible; if not,the administration will have to show the strategic wisdom to slow down as needed to deal with problems.

Having just returned from a trip to the country arranged by the top American commander there, Gen. Ray Odierno, we agree that Iraq continues to make tremendous strides, thanks to American assistance and, increasingly, the efforts of Iraqi politicians and security forces. But both those ready to dust off the infamous "Mission Accomplished" banner and declare victory and those who continue to see Iraq as an inherent disaster that must simply be abandoned have to realize that continued American involvement will be crucial for several more years.

Young democracies are fragile entities. Political scientists generally agree that achieving a peaceful and credible second round of elections is critical in putting a new democracy on a path toward stability, because such elections test whether the country can accomplish a nonviolent transfer of power.

Iraq is holding its second round of real elections this year. It just concluded extremely successful provincial votes, and national parliamentary elections are to follow. Iraq's calendar this year is also jam-packed with other important political events. If the United States can help the Iraqis secure even modestly positive outcomes for these events, we will have gone a long way toward realizing our goals of sustainable stability in Iraq and bringing most of our troops home next year.

Iraq is no longer convulsed by the chaos, sectarianism and terrorism that were driving it into all-out civil war in 2006. To be sure, friction remains, most notably in the ethnically diverse city of Mosul in the north, where coalition forces have only recently been reinforced to the point where they can conduct the kind of counterinsurgency campaign that secured the rest of the country. Unfortunately, they are racing against the clock to do so, since the recently signed security agreement between Baghdad and Washington requires American combat forces to leave Iraq's cities by June 30.

But the main challenge now is that some key political players, strengthened by Iraq's enormous recent progress, are less interested in moving their country forward than in using every tool at their disposal to put themselves in advantageous positions after the American withdrawal. Worse still, some - perhaps many - are doing so by exploiting the immaturity of the political process and the ambiguities in Iraq's constitution.

Iraq has several important challenges that could strain its political system over the next year. They include the return of up to four million displaced people to their homes; the release of thousands of people detained by coalition forces, some of them surely dangerous; the continued search for permanent jobs for the largely Sunni Sons of Iraq, whose actions against the insurgents in Anbar Province were a key to the success of the "surge"; falling oil prices that will hamper the government's ability to pay its workers; and the more general tasks of increasing oil exports, employment and the quality of life for Iraqis.

Perhaps the most vivid demonstration of the problems Iraq faces is the enormous tension brewing between the autonomous Kurdistan Regional Government, led by Massoud Barzani, and the central government led by Prime Minister Nuri Kamal al-Maliki. During the years of warfare between Sunni and Shiite Arabs, the Kurdish issue lay dormant. But now it has roared back to the forefront. Nearly everyone we spoke with in the area this month - Kurds, Arabs, Americans and others - described the situation as explosive and the enmity between Mr. Barzani and Prime Minister Maliki as ferocious.

The Kurdish difficulties do not revolve around suicide bombers, visions of seventh-century caliphates, disdain for the United States or pure sectarian hatred as in the Sunni-Shiite civil war. They concern the cold, hard issues of land and oil and cash, as well as the distribution of power between Iraq's center and its regions and provinces.

In addition to the three provinces that are run by the Kurdish regional government, the Kurds claim lands in three other Iraqi provinces, including the emotionally charged and oil-rich region of Kirkuk. To back up these claims, and because the Iraqi government previously had been unable to secure much of northern Iraq, the Kurds deployed their pesh merga fighters in these disputed places - often originally at Baghdad's request. They have also used their considerable political powers in much of the area to undo the effects of Saddam Hussein's brutal policy of Arabization of Kurdish lands. Meanwhile, they have exploited ambiguities in the Constitution to strike deals with foreign firms for oil wells within their three provinces, much to the displeasure of Baghdad.

These tensions nearly led to violence last summer in the ethnically mixed city of Khanaqin, which lies outside the current boundaries of Kurdistan, in Diyala Province, but was under the control of the pesh merga. Prime Minister Maliki, emboldened by recent battlefield successes of Iraq's Army and police against Shiite militias in Basra and elsewhere, apparently decided to put the Kurds in their place as well.

Mr. Maliki deployed army forces to Khanaqin, only to have them run right into a standoff with the pesh merga troops. Ultimately, cooler heads prevailed, but it should be noted that many of those cooler heads were American - the United States troops who were partnered with the Iraqi Army formations ran interference between the Iraqi Army units and the Kurdish soldiers and brokered a peaceful resolution.

Today other crises loom. An oil field in Kurdistan developed by a Norwegian company is poised to begin production in March. It is not clear whether the Kurds will contribute the revenue from the field to the common Iraqi oil pot, as the central government demands, or will claim the proceeds entirely for themselves. Not only does Mr. Maliki view any Kurdish effort to go it alone on oil as unacceptable, he may also sense that inflating it as a campaign issue could help him and his Dawa Party in parliamentary voting this year.

And while key leaders from Mr. Maliki's government, various parliamentary opposition parties, and the Kurds all insist that they plan to resolve their differences peacefully, several members of the American military command for Northern Iraq warned us during conversations in Iraq last week that the officers of the newly forming Iraqi 12th Infantry Division have repeatedly stated that once their unit is ready, they plan to occupy their entire area of operations - which includes Kirkuk. The pesh merga fighters, of course, are just as adamant that this would be unacceptable.

While the United Nations has been putting together a grand plan for resolving the Kurdish issues, it cannot impose a solution - and under the terms of the new security agreement, neither can the United States. But just because Washington no longer holds viceregal authority does not mean it is powerless. America's military forces, which increasingly serve as peacekeepers, and its commitment of nation-building tools (including provincial reconstruction teams and technical advisers in the Iraqi government) still give American officials tremendous influence. Washington must employ this leverage deftly to help Iraqi Arabs and Kurds (and Turkmens and others) overcome their differences.

The Obama administration has been handling the Iraq war pragmatically so far. And while announcing a timetable poses a serious risk, the details of Mr. Obama's plan leaked to the press this week are promising, especially leaving behind a large residual force including trainers and quick-reacting "maneuver units" and slowing the drawdown by three months relative to what he had promised on the campaign trail. Those few months are vital, as they should give the Iraqis adequate time to form their new government before the American troop levels are vastly diminished. Ideally, whatever he announces now, Mr. Obama will remain flexible, and slow the pace next year if necessary.

GIVEN Iraq's strategic significance, the mission ceased to be a "war of choice" the moment American forces crossed the border in March 2003. Now we have no choice but to see Iraq through to stability.

It is worth remembering that our current economic disaster started with a great rise of oil prices from 2004 to 2007, which then helped set off the mortgage and credit meltdowns. Although the increase in oil prices had more to do with inadequate refining capacity and increased demand from China and India than with instability of the Middle East, previous recessions have resulted from the area's political calamities; it is easy to imagine others in the future.

In addition, we cannot overlook Iraq's enormous regional significance. President Obama has rightly insisted that the Bush administration committed cardinal sins by failing to engage Syria and Iran in its regional strategy and by remaining aloof from the Israeli-Palestinian and Lebanese conflicts for too long. But any broader Middle Eastern agenda is hostage to the situation in Mesopotamia. If Iraq slips back into chaos, President Obama is going to find little desire among Jordanians, Saudis, Syrians and Turks for taking the hard steps to forge a durable peace with Israel - or among Iranians to reach a rapprochement.

In the end, it is up to the Iraqis to make their nation peaceful and productive - we should not baby-sit Iraq through all of its problems as a young democracy. But it faces one last crucially tense period in the coming 12 to 18 months. American interests argue strongly for using all the leverage we have gained among Iraqis during six years of intense partnership to help Iraq through its "year of transitions" - then we can bring our troops home quickly, but responsibly.

This story has been posted in the following forums: : Headlines; Iraq; Figures; COS - Congo Kinshasa; Foreign Policy; Brookings Institute; Military